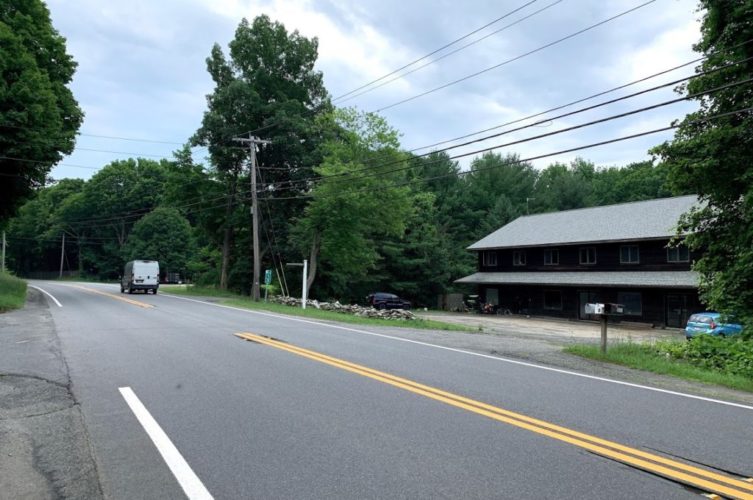 Editor’s note: this story has been revised to reflect the fact that the town of Egremont does, in fact, have a zoning bylaw addressing medical marijuana, and that Emerald expects to complete its special permit application by the end of July.

Egremont — New questions are being raised about a controversial marijuana shop proposed for a largely residential neighborhood on Route 23 not far from the New York state line.

Thomas McMahon, who owns property near 195 Hillsdale Road where Emerald River LLC wants to set up a cannabis store, has written an open letter to the town and its select board raising questions about environmental issues, traffic estimates, Emerald’s business model and the integrity of a community outreach meeting last week.

Click here to read McMahon’s letter, which has been making the rounds on social media, including the Egremont Forum, a Facebook group focused on town-related issues.

Emerald River, a limited liability corporation formed last year by Morriss M. Partee and Matthew R. Moriarty, both of Holyoke, proposes to open a marijuana store at the former Home interior design shop, across the road from the western intersection of Route 23 and Taconic Lane.

McMahon, an architect who was born in Pittsfield but practices in New York City, penned a memo of more than six pages filled with questions, observations, maps and portions of the Egremont zoning bylaw. He even included a screenshot of several tweets Partee had posted in 2012 in opposition to a proposed casino not far from downtown Holyoke.

McMahon acknowledged that he had a “negative reaction” to the proposed cannabis store in that location but that his opposition “crystalized” during the community outreach meeting via Zoom on July 2. See Edge coverage of the meeting here. See the video below of the three-hour meeting as recorded by The Edge:

“The presentation largely relied upon ambiguity, contradictory notions, wishful thinking, and really, claiming both sides of issues when they suited the moment,” McMahon wrote.

“For example — all activity would occur inside, but let’s make a nice porch out front, or, traffic won’t pile up out front because of a huge parking lot in the back, but this will be environmentally friendly because of gravel. The meeting was woefully short on facts, and out of this, came a desire on my part to analyze some of the presentation through publicly available facts.”

McMahon also took exception to a statement written by attorney Wendy Linscott, who is a member of the Egremont Land Trust, at the beginning of the meeting and read by Mary McGurn. Linscott’s letter, one of the few positive statements made about Emerald’s proposal, was read first during the discussion after the presentation.

“One letter, read at the beginning of the Q&A session, admonished the group to put down their pitchforks and keep an open mind,” McMahon said. “The letter was clearly pre-arranged to be read first, but presented by Mr. Partee as chosen at random, in keeping with a level of distrust fostered by things like turning off the chat function during the presentation and claiming ignorance to doing so.”

In her letter, Linscott said Route 23 “is a heavily traveled major road that serves at least 6,000 vehicles per day, many of them tractor trailers.” Partee has estimated his store would serve 150 customers per day, an increase Linscott said “could easily be accommodated.”

But McMahon’s own research of state Department of Transportation data indicates that the total annual average daily traffic crossing the New York border on Route 23 is 3,002. So the effective traffic increase generated by the proposed store, he said, would be considerably larger relative to the figure suggested by Linscott.

“I was trying to show that there was a traffic impact that was being minimized,” McMahon said in an interview.

The property line of McMahon’s property is about 100 feet from 195 Hillsdale Road, so McMahon walks by it almost every day when exercising. In his wanderings, McMahon said he has noticed an abundance of wildlife.

McMahon also found that behind the building where Emerald proposes an overflow parking lot, a portion lies in an area defined by the Massachusetts Natural and Endangered Species Program as a core habitat area affecting species of conservation concern, according to data from the state.

Also called into question was Emerald’s business model. If approved, the store would be situated only a mile and a half from the border with New York, where adult-use cannabis remains illegal and which Partee has acknowledged is one of the strengths of the proposed location.

This leaves open the possibility, McMahon said, that Partee is “simply arriving to exploit an imbalance in legalities between states and hoping to profit on this location.” What then happens when, as expected, the state of New York legalizes recreational sales in two or three years?

Finally, McMahon published a screenshot of several tweets Partee had published in December 2012 in opposition to the proposed Mountain Park casino near Mount Tom in Holyoke, raising the question of hypocrisy on the part of Partee. 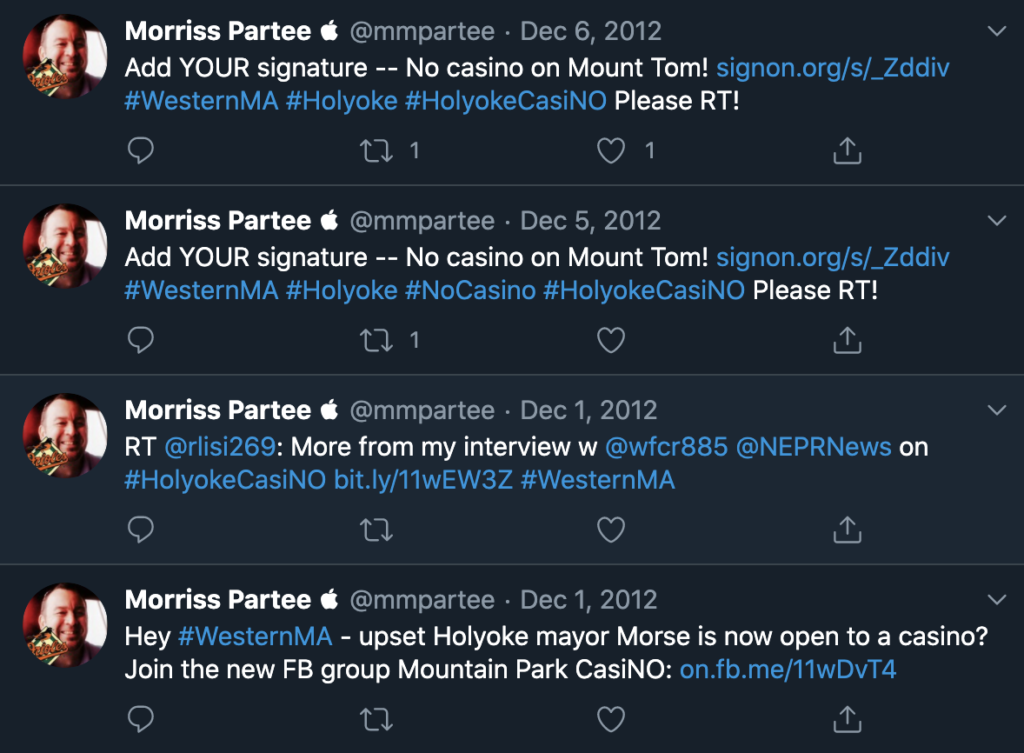 Partee referred questions to his attorney, Peter Puciloski of Great Barrington. In an interview, Puciloski acknowledged that Emerald River had been made aware of Linscott’s statement and that the Emerald team decided to lead off with it.

“I think it’s fair to say we wanted to start off on the right foot,” Puciloski said. “We had no communication with Wendy. We did not solicit the letter and did not review the letter before it was sent.”

Nor did anyone on the Emerald team disable the chat function on the Zoom platform, Puciloski said, adding that he, too, has used Zoom before and has “not always had great experiences with it.”

As for McMahon’s contention that the rear of the property is in an environmentally sensitive area, Puciloski said his research indicated otherwise. No vernal pools were detected and there are no endangered species that he is aware of. If it is discovered during the special permitting process that there are wetlands issues, then those will be taken up by the town Conservation Commission, Puciloski said.

And what of Partee’s tweets against the proposed casino for Mount Tom? Apple and oranges, Puciloski said: “A casino only survives if it attracts a very large number from a very large area.”

There is a perception in Berkshire County that marijuana stores also attract large numbers of people, perhaps because Theory Wellness, which opened its doors in January 2019 as the county’s first adult-use cannabis store, had long lines during most of its business hours.

But the landscape has changed considerably since then. Canna Provisions has opened in Lee and Great Barrington has five proposed stores that are in the state licensing process. The Pass in Sheffield is expected to open later this month.

“When these stores become as ubiquitous as drug stores, they will have the same traffic as drug stores,” Puciloski said. “We are burdened with the history of Theory because it was the only game in town.”

As for what happens to Emerald River after recreational marijuana is legalized in the state of New York, Puciloski was dismissive: “If we were opening a restaurant or retail store, no one would be asking that question.” He quickly added his client is investing a substantial amount of money into the venture (though he did not say how much), and in the unlikely event that the company fails, then “there will be a very nice building there.”

The previous business, Home, has closed but there are two occupied apartments upstairs. Puciloski said the tenants would most likely be relocated with the assistance of the company.

George McGurn, who chairs the Egremont Select Board, told The Edge in an interview that the town has no bylaw that addresses retail adult-use or the cultivation of cannabis. The town did enact a bylaw governing medical marijuana several years ago.

“With no bylaw, this is the wild west,” he said, tongue planted firmly in cheek.

Almost all of Egremont is zoned residential. Click here to view the town’s zoning map. Egremont is also a so-called “right-to-farm” community, so agriculture is a by-right use in the town’s sprawling general residential district. But a retail cannabis business wishing to locate in that district would need a special permit from the planning board, McGurn has confirmed.

McMahon noted that Section 6.2 of the town’s zoning bylaws stipulates that the special permit-granting authority must find that the proposed use “is essential or desirable to the public convenience or welfare at the proposed location” and “will not be detrimental to adjacent uses or to the established or planned future character of the neighborhood.”

Another cannabis retailer has proposed to set up shop in the town. Egremont residents Ari and Heidi Zorn want to operate a cannabis store in the basement of the Egremont Spirit Shoppe building in downtown South Egremont, where several businesses already operate.

Puciloski said Emerald plans to complete the special permitting application by the end of the month.