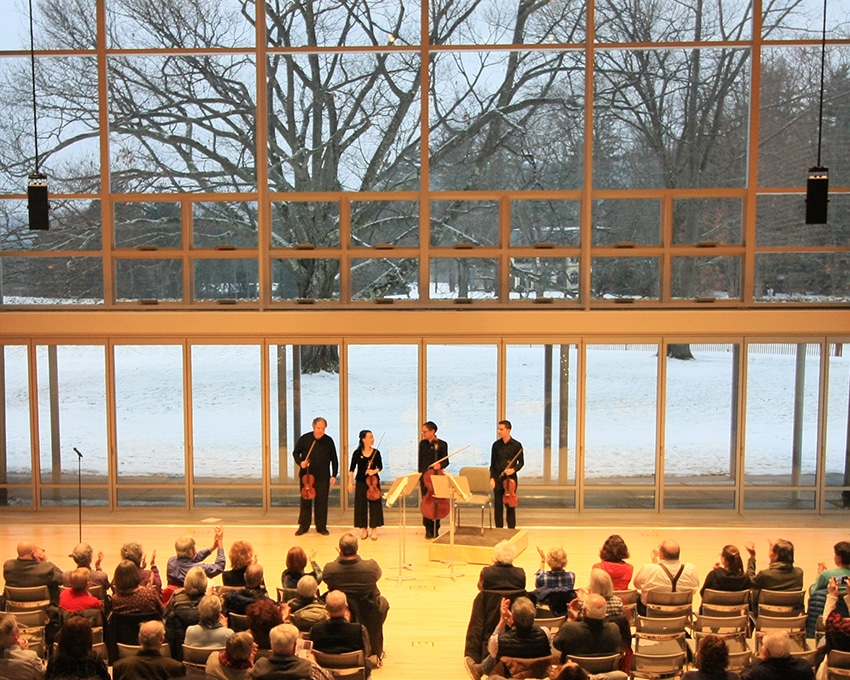 Lenox — Who expected a sellout crowd at Tanglewood on a snowy Sunday in the dead of winter? Only the Boston Symphony Orchestra. BSO staff were prepared for traffic jams on Sunday, Feb. 9, with a shuttle running between Tanglewood’s Linde Center for Music and Learning and an overflow parking area at the campus’ main gate. The big draw was a group of the BSO’s finest players: violinist Victor Romanul, violinist Xin Ding, cellist Adam Esbensen and violist Daniel Getz. These are the same musicians who gave killer performances of Kodály and Beethoven on Dec. 1 at the Linde Center. The orchestra’s management scheduled Sunday’s free concert, along with others throughout greater Boston, after the coronavirus epidemic forced the orchestra to cancel its scheduled East Asia tour, which was to run Feb. 6–16.

Sunday’s program consisted of three pieces: Mozart’s Duo for violin and viola, K. 423; the Chaconne from Bach’s Partita in D minor for solo violin (BWV 1004); and Beethoven’s String Quartet No. 10 in E-flat, Opus 74, “Harp.” Xin Ding and Daniel Getz handled the Mozart number with such aplomb that one could easily forget how difficult it is to maintain good ensemble on this piece. It was the same with the Beethoven quartet, which the group performed so sweetly and with such finesse that we could hear the lovelorn Ludwig speaking through the centuries of his unrequited love and constantly broken heart.

Victor Romanul specializes in J. S. Bach’s sonatas and partitas for solo violin. He has memorized all of them, and sometimes he performs the complete set in a single recital. So he was rather well-prepared to play the Chaconne from the D minor Partita on Sunday afternoon. Likewise, the savvy crowd was well-prepared to hear it, judging by the way they stood and clapped at the end. They knew that more violinists attempt this piece than are able to actually carry it off. But Mr. Romanul does quite a bit better than carry it off. He plays it as passionately as you’re ever likely to hear it — with accuracy of intonation that rivals all rivals. It will be difficult to find even a celebrated virtuoso who plays Bach’s D minor Chaconne better than Victor Romanul.

The BSO’s 10-day series of free pop-up concerts will culminate Sunday, Feb. 16, at 3 p.m. in a performance at Boston’s Symphony Hall under the direction of Thomas Wilkins, BSO Germeshausen Youth and Family Conductor.