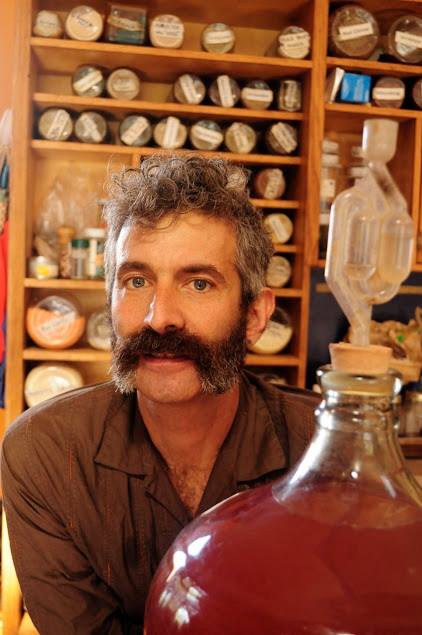 Michael Pollan calls Sandor Ellix Katz the “Johnny Appleseed of Fermentation.” A New York Times bestselling author, the New York Times calls him “one of the unlikely rock stars of the American food scene.” He even has a nickname, Sandorkraut, after the food that launched his experiments with fermentation, leading to the wildly successful 2003 book “Wild Fermentation.”

And he’s coming to the fourth annual Berkshire Fermentation Festival, happening Sunday, Sept. 16, at the Great Barrington Fairgrounds. His books, along with the hundreds of fermentation workshops he has taught around the world, have helped launch a revolution reviving the fermentation arts. “He has thousands of followers,” said Michelle Kaplan, who has organized the festival these past four years with co-founders Maddie Elling and Abe Hunrichs of Hosta Hill. “And I wouldn’t be surprised if him alone coming will triple the amount of people we had last year.”

And last year, the festival, presented by Berkshire Ferments, drew over 2,000 people. Since 2015, it’s grown each year not only in attendees but in the amount of fermentation-related vendors and activities. Over 50 local cultured vendors are slated for this year, including many new ones such as NYrture Food talking about natto (fermented soybeans) and Maple Valley Creamery making special batches of cultured ice creams for the fest (including pickle ice cream!). The family-friendly festival will also have live music, games, a culture swap, and plenty of fermented foods to sample and purchase.

“It’s certainly created a buzz. People seem really excited about it,” said Kaplan, who noted that more media outlets have wanted to feature the festival, and local businesses have been increasingly eager to sponsor it. “We have something to show now. They see how many community members come out for it, the educational component, how it supports local businesses, and how we continue to keep it a free, by-donation event.”

In part, she believes people are hearing more about the health benefits of fermented foods in the media. “But actually, sauerkraut was more popular 85 years ago. Honestly, though, fermentation never stopped being cool. There has always been an interest in cheese, beer, wine, sourdough bread, cured meats, condiments. It’s not like fermentation disappeared.”

Which is where celebrities like Sandor Katz come in.

Katz is somewhat of a hero for Kaplan, who first learned about him after high school, when she was traveling around the country work-trading in various organic farms and communities. “Everywhere I went seemed to always have a big bucket of peanut butter, Dr. Bronner’s soap and Sandor Katz’s “Wild Fermentation” book on the shelf.” The lime green and neon pink color scheme of the cover jumped out at her. “It became a game; when I first arrived at a new place, I would go directly to the book shelf and see if it was there, waiting for me to open it and experiment with a recipe.”

Then, a few years ago, she took a three-day intensive fermentation workshop with him at Rowe Conference Center, at the northeastern edge of the Berkshires. “His enthusiasm for food and how accessible he made the information was very inspiring. We covered everything from miso to sourdough pancakes to kombucha to kvass to kefir, while demystifying the process. It was such a breath of fresh air to be fully immersed in the broad world of fermentation, surrounded by people that were just as interested.”

Katz’s appearance at the festival, which runs 10 a.m to 4 p.m., will include a Q&A at 3 p.m., at which people can troubleshoot all their fermentation-related conundrums. And Chelsea Green Publishing, Katz’s publishing company, will be vending books.

In the foreword to Katz’s newest book, the more in-depth “Art of Fermentation (2012), Pollan writes: “To ferment your own food is to lodge an eloquent protest—of the senses—against the homogenization of flavors and food experiences now rolling like a great, undifferentiated lawn across the globe. It is also a declaration of independence from an economy that would much prefer we were all passive consumers of its commodities.”

That diversity is one theme evident if one browses Katz’s website. The other is the diversity and health benefits that fermented foods bring to the depleted microbial communities of our modern-day digestive tracts.

As Kaplan says: “We’ve been eating these foods all along … everybody in every part of the world eats and drink products of fermentation just about every day. It’s just a matter of reclaiming this ancient practice and becoming aware of the importance of fermentation in our lives.”

Of Katz, she promises, “Everything about him embodies the bubbly, effervescent quality of wild fermentation. Alive, excited, vibrant, unique. He has a very strong life force.”

For the full schedule, see the Berkshire Edge calendar.