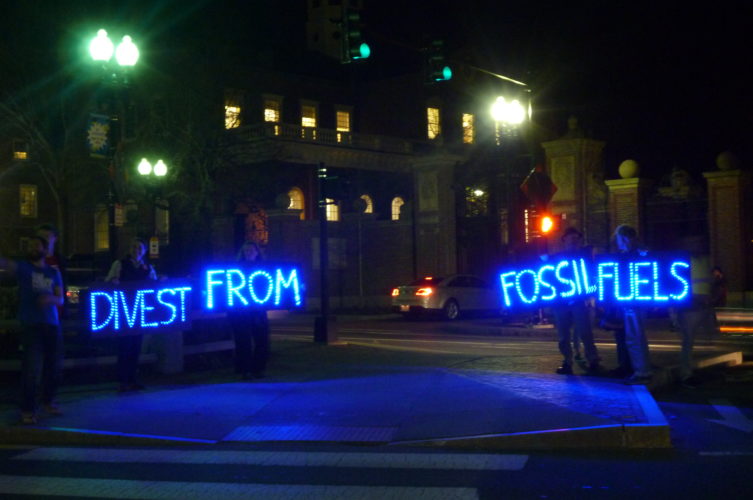 CAMBRIDGE — As the planet continues to warm, activists pushing for fossil fuel divestment are turning up the heat. College students have been organizing sit-ins and occupying their universities’ administrative buildings demanding justice and a reconsideration from university officials to answer the call to divest. A recent sit-in at Yale led to university police arresting 19 students.

Hundreds more took the same risk last week at Harvard University as alumni, students and others in the community participated in a weeklong act of civil disobedience. Harvard Heat Week kicked off on Sunday, April 12 with a rally at First Parish church in Cambridge. Following that event, protestors marched across the street to join students who had begun a blockade of the entrances to Massachusetts Hall, an administrative building that houses the office of university president Drew Faust.

For more than than two years student organizers on campus have been calling on President Drew Gilpin Faust to divest the university’s $36 billion endowment holdings in fossil fuel companies. But Faust has been steadfast in her refusal to do so, saying she does not believe divestment from the fossil fuel industry is “warranted or wise.”

Not only have Faust and her administration rejected the call to divest, but they have also refused to meet with student organizers on the record and refused to engage in dialogue or debate on the issue.

“What we face today is not just a problem of persuasion. It is a question instead of how to shake Harvard University out of its centuries-old institutional slumber,” Harvard student Talia Rothstein explained during the Heat Week opening rally.

“In the face of the climate crisis Harvard is profiting from the same companies that are actively undermining the scientific knowledge being generated from within the Harvard community,” added his daughter Kelsey Wirth, co-founder of the group Mothers Out Front.

Other speakers at the kickoff event, emceed by the Rev. Lennox Yearwood of the Hip Hop Caucus and Harvard alum and 350.org founder Bill McKibben, included global activists from South Africa and the Pacific Islands.

Ferrial Adam, former apartheid activist from South Africa, pointed out that it took Harvard a decade before it decided to commit to selective divestment from companies engaged in business in South Africa during the apartheid era.

“The issue now is, with climate change we don’t have ten years to wait. Climate change is happening now,” she said.

Following this call to action, more than 100 people gathered in Harvard Yard to officially kickoff a week of peaceful protests in front of administrative buildings.

Since the fossil fuel divestment movement officially launched in 2012, some 200 institutions globally have committed to divest, including religious institutions, municipalities, and foundations, in addition to universities like Stanford and, most recently, Syracuse.

Locally, student organizers with Divest Williams are gathering widespread support within the Williams College community. According to Divest Williams’ Sarah Vukelich, more than 900 students have voted in favor of divestment on a referendum, and 253 faculty and staff have signed on their support in a letter. Additionally, she said over 600 alumni have signed a petition supporting divestment.

Meanwhile, back in March the Great Barrington Selectboard unanimously passed a resolution supporting fossil fuel divestment at the state level. Town residents will be voting on the resolution at the Town Meeting in May.