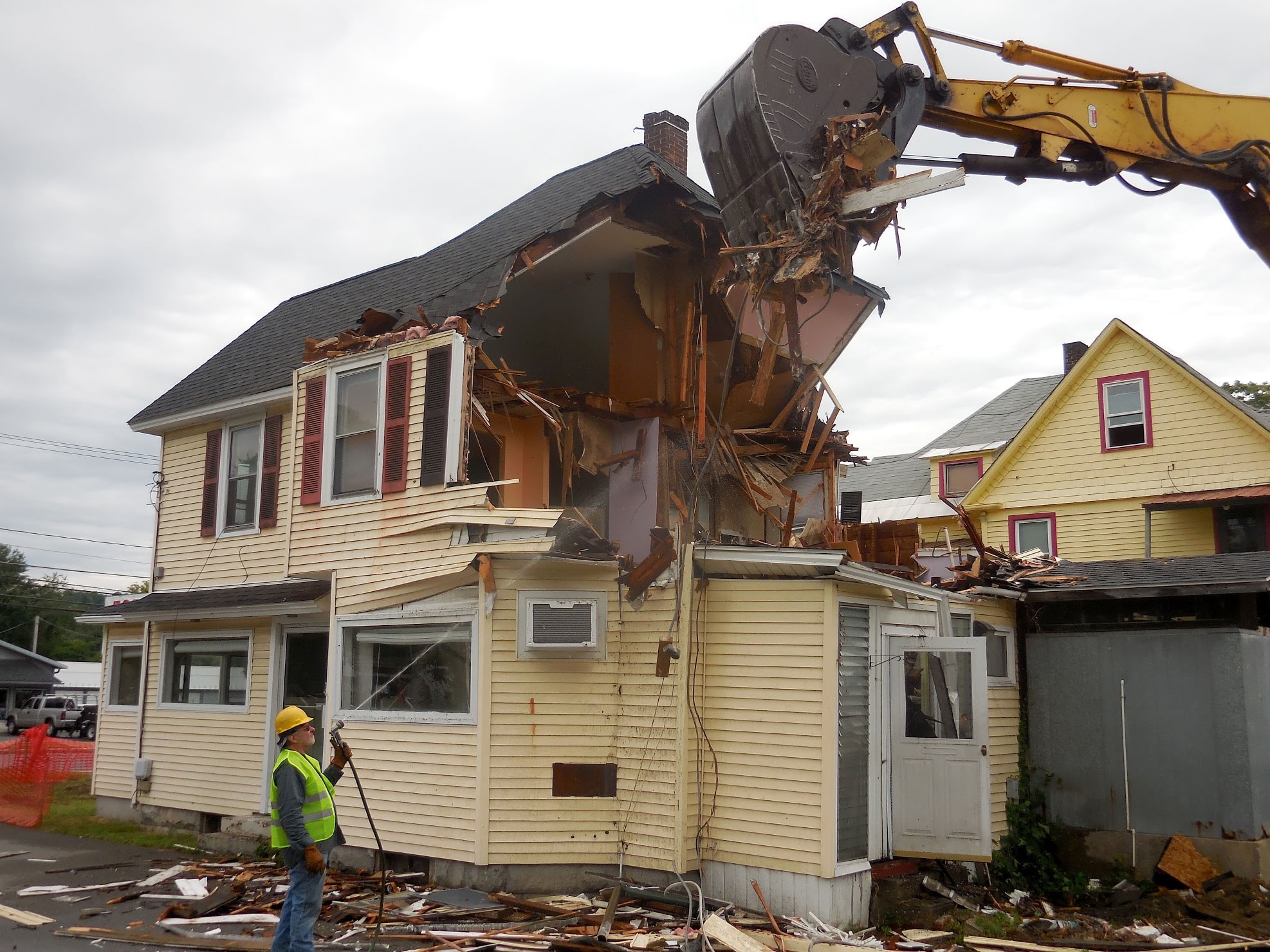 Great Barrington — A building that made generations of mouths water was torn down today to make room for a parking lot.

The two-story structure that formerly housed Marty & Jim’s sandwich shop was demolished this morning. The rubble will be carted away, the foundation will then be demolished and filled in to create more parking space for Goodwill Industries, which relocated to the former Sears appliance store on Stockbridge Road earlier this year.

“It’s been in the works for a while,” said Craig Barnum, who purchased the empty Sears store and the adjacent building in February for $1.2 million from Austin and Carole Mooney of Egremont. “We’re going to level it and give Goodwill one of the best parking lots on Stockbridge Road. Parking is oxygen to buildings. This will give them a nice, big open lot.”

Barnum’s tenant is Goodwill of the Berkshires and Southern Vermont, which had operated a retail outlet in a Stockbridge Road building that it shared with Laramee Cleaners between Mavis Tire and Theory Wellness, the cannabis retailer. Barnum and Goodwill announced the move in February.

Barnum said at that time he was considering his options for the outbuilding. In addition to the ground-floor retail space that housed the sandwich shop, there was an apartment on the second floor of the building, which reportedly had mold issues.

While Barnum said he did receive some rental inquiries, he decided the lot would be more valuable as parking than as a rental unit.

“The building was in rough shape,” Barnum explained. “Parking is the highest and best use long-term for the property.”

Business has been brisk at the Goodwill, said Barnum, who referred specific questions about the store to CEO David Twiggs of Goodwill of the Berkshires and Southern Vermont, which operates the store.

Twiggs said the number of donors and shoppers has definitely increased since the move but he did not have exact number at his fingertips.

“We’ve outgrown the property already, so that says a lot,” Twiggs said.

He said the project will add about a dozen new spaces to the 30 or so that already exist. In addition, Goodwill plans to put up a fence along the northern border of the property. The added spaces will also improve the traffic flow for donors who use the loading-dock drop-off point at the rear of the building.

“The amount of impact Goodwill has had is remarkable,” Barnum explained. “Support from the community has been awesome.”

Indeed, on Monday morning there were several shoppers in the 5,600-square-foot store and few empty parking spaces in the lot. The Sears building has almost five times the floor space compared to Goodwill’s store in the Laramee Cleaners building.

The former Sears building was built in 1997 on a little more than 8/10 of an acre and totals some 8,400 square feet, including a large storage room at the rear. It is zoned for business and has additional storage on the second floor that is serviced by a lift.

Before Marty & Jim’s, there were two other eateries at various times in the outbuilding: Angelina’s and Smitty’s Sandwich Shop. David and Jeanne Smith owned both the Sears building and sandwich shop. They sold both to the Mooneys for $1.85 million 10 years ago. Smith is a selectman in Sheffield and a former selectman in Great Barrington.

Local historian Gary Leveille said, once upon a time, there were several older homes on Stockbridge Road. Most, including the sandwich shop building, were designed to look like Victorians. Most have been demolished or turned into retail with apartments upstairs, as the sandwich shop structure was.

There are only a couple of single-family residential homes left on that stretch of Stockbridge Road: a stucco home to the south of the Goodwill building and a blue Cape Cod next to the Greylock Federal Credit Union office. Previously there were residential homes where the Cove bowling alley and the Marketplace Cafe (the former Friendly’s) are currently located.

“One by one, they have been torn down,” Leveille said. “They were just average homes.”

There was what Leveille described as an “absolutely beautiful inn” where the Lipton Mart is now. From 1886 to 1932, the Berkshire Street Railway Company trolley ran along Stockbridge Road through that section of town.

And of course, with the exception of the trolley, Stockbridge Road was largely quiet and residential until the 1950s and ‘60s, when it began its evolution into the bustling commercial strip it is now.