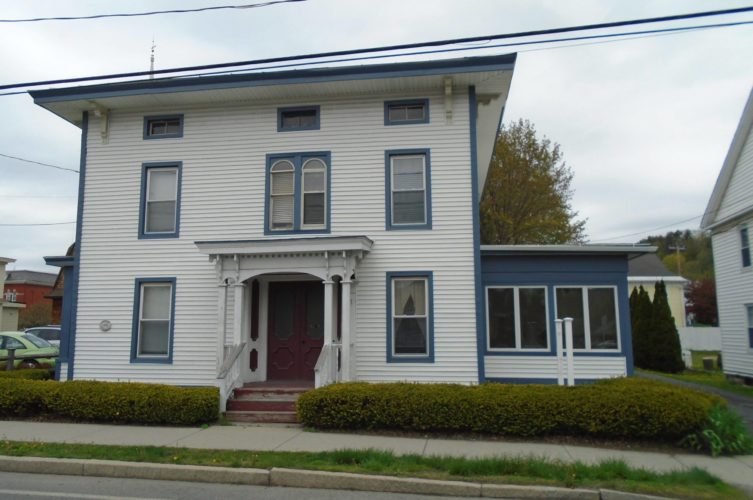 Lee — A historic office building in downtown Lee could be adapted for a new purpose, as it has been listed for sale for $209,000.

This past week, MacCaro Real Estate held viewings for the former Porchlight VNA/Home Care at 32 Park St. with buyers that had interest in both utilizing it for commercial uses or converting it back into a home, according to real estate agent Anthony Caropreso.

Porchlight, which was originally known as Lee VNA, had taken up residency in the Park Street building since 1992. The company’s beginning dates back to 1912.

In 2014, Porchlight VNA and Home Care merged with Chicopee VNA; and in 2018, Collective Home Care merged with the company, allowing for expansion of personal care services in Franklin County. Its offices located in Lee, West Hatfield and Chicopee covered Berkshire, Hampden and Hampshire counties for VNA services and also covered Franklin County for supportive services.

In March of this year, the organization announced that it would discontinue its operations in Lee as well as at its Chicopee and West Hatfield offices as of May 5, said CEO Ruth Odgren. When Odgren first came on board with Porchlight this past September, the company was dealing with a downward trend in its overall financial picture much like many other small visiting nurse associations across the country. Free-standing, small visiting nurse associations do not really have a referral source pipeline like hospital-based agencies or national chains do and are finding it hard to financially stand alone in this health care environment, she said.

By the end of March, the organization ceased offering services from its visiting nurses or home health providers. Between Porchlight’s Chicopee and Lee offices, the company had a total of 299 employees, said Odgren. Of that number, more than 40 were full- or part-time employees and the rest were per diem. With the closure amid the onset of the COVID-19 pandemic, she said that the company worked hard to make sure employees were offered or were able to transition to other home care agencies in the area.

Built in 1840, the original owner of the building was likely Franklin Sturgis, son of William Sturgis, according to Lee Historical Commission records. William Sturgis and his brother, Thomas Sturgis, were Lee’s first stonecutters who cut mostly gravestones. Records state that after Franklin Sturgis, Dr. Hubbard Bartlett purchased the Park Street building and owned the house in 1858. Bartlett was the first “and for a time, the only druggist in town.” He served as postmaster from 1818 to 1845 and was a state representative in 1825. When he died, he passed the house onto his son William Bartlett. William Bartlett lived with his wife, Sarah Ball, until his death in 1897.

“ … One of Lee’s finest examples of an Italianate house and one of the best preserved in its original detailing,” Macintosh’s record states.

In 1875, the building had a large, two-story addition added onto its rear.

As a nonprofit organization, Porchlight is required to seek approval for where its assets go from the sale of the buildings and its contents, said Odgren. Porchlight will need approval from the attorney general for the sale of the Chicopee building because the building’s worth is the biggest asset and it’s important that it’s sold for a fair-market value, she said. The 22,557-square-foot Chicopee office building, located at 2024 Westover Road, was previously utilized as the mess hall for Westover Air Force Base and is listed for nearly $1.6 million. Though it’s too soon to say where the assets will go, the company was instructed to provide them to other nonprofit organizations that have similar missions as Porchlight.

“It is an honor and privilege to care for patients and their families in this community,” Odgren said. “We have enjoyed the opportunity to serve you and believe that we helped people to stay in their homes, where they prefer to be.”