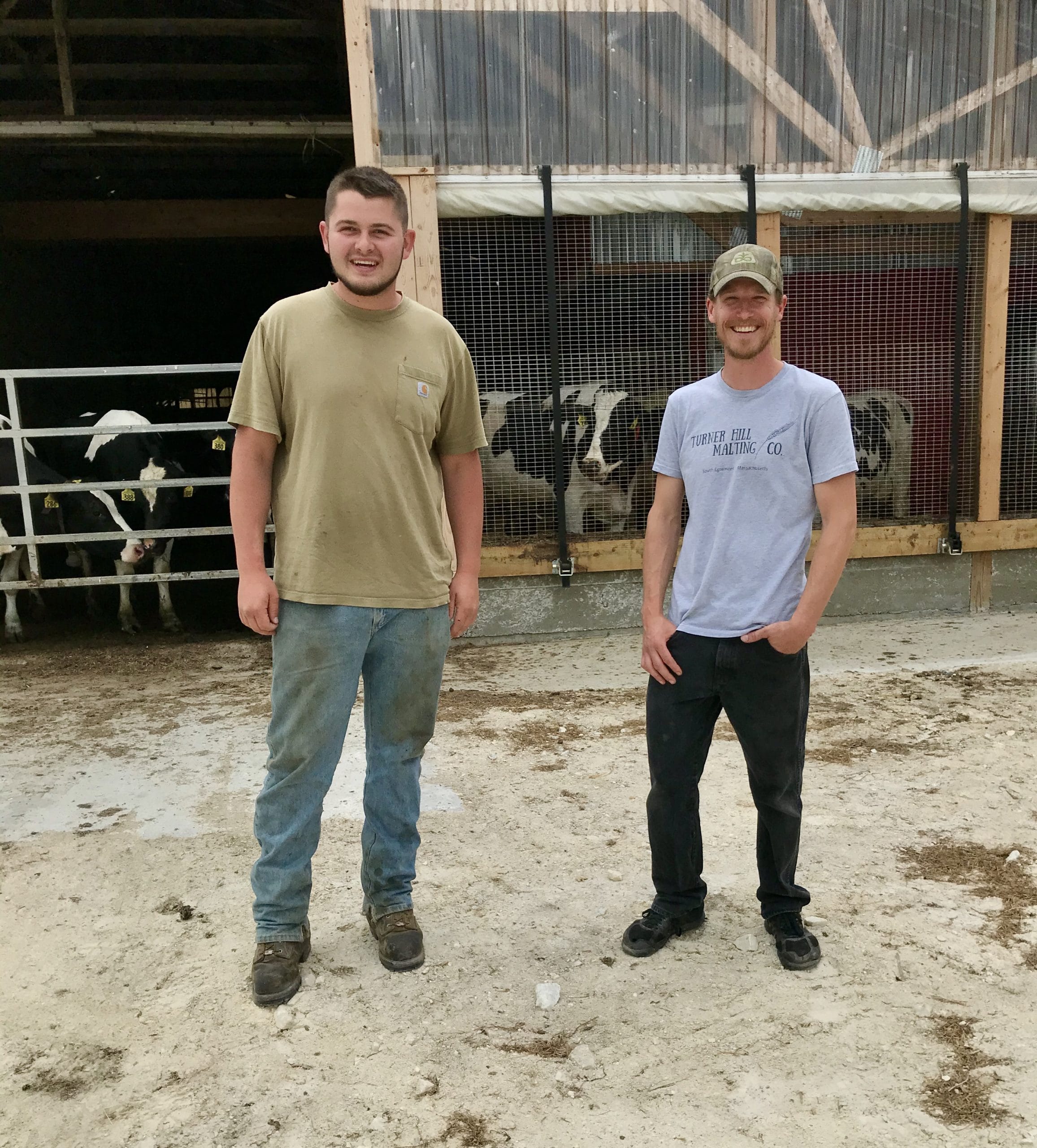 Editor’s Note: Please see information at the end of this article about three State programs that are vital for Berkshire farmers.

Darrell Turner was planting corn at his South Egremont farm in May when a neighbor stopped and asked him what he was doing.

“We have a lot of city people, like that neighbor, who are usually only here on the weekend,” said Turner, 36. “They didn’t realize that we actually farmed in the area.”

It took the pandemic for the general public to realize that most of the food we eat in New England comes from somewhere else. It also made them realize a good way to avoid shortages was to turn to local producers. Massachusetts farmers have reported a run at their farms for eggs, meat, cheese and veggies since the lockdown began. “They are suddenly interested in what we’re doing,” Turner says.

What the Berkshires have in abundance is milk. Seventeen of the state’s 117 dairy farms are in Berkshire County. They manage most of the farmland and inject millions into the local economy each year. Massachusetts is more food-sufficient for dairy than for anything else and most of the milk is bottled or processed into products sold in state. That’s important when 24% of the state’s residents are now facing food insecurity.

The average age of a Massachusetts farmer is 60, and new farmers need to step in. A handful of younger people in the county have decided to help keep their family dairy farms going. They know that farming in Massachusetts isn’t easy. Land costs are high and the second-home market drives up prices. Milk prices are declining and the work is relentless. The life of a dairy farmer often means living with debt. Even so, dedication to a family tradition and to growing food for the region brought them back to their farms. Turner and his friend Ian Allen, who runs Balsam Hill Farm down the road in Sheffield, are two of the next generation of farmers. With fresh eyes and youthful enthusiasm, these younger farmers are changing the game with robotic milking systems, iPhone tracking of cows and innovative ideas for diversifying their businesses.

Turner wasn’t headed for a life on the farm, even though three generations of Turners had been on the land since the 1950s. He went off to study mechanical engineering at Boston’s Wentworth Institute of Technology and then got a job at a plastics company in Rhode Island. After 11 years away, he and his wife Rebecca decided they wanted to be closer to their families and started thinking about moving back. Turner saw that his dad and uncle had too much work – in addition to their 120-cow dairy operation, they were growing all their own feed on 650 acres and doing most of the field work for five other farms. Maybe, Turner thought, he should join them. “I didn’t fully comprehend the lifestyle change—it was culture shock at first,” working from 7 am to 7 pm and only taking every other weekend off.Turner, like a lot of the younger generation, pushed to add technology to the farm. “The workload had become unmanageable, so we made a big decision to invest in a robotic milking system,” said Turner. He, his father and his uncle rebuilt the barn and invested half a million dollars in a state of the art Lely robot. It saves them about six hours of labor a day. Always the engineer, Turner lights up when he describes the robot and the software that tracks each cow’s food intake, milk production, fertility, movements, and general health – all of which can monitored via his iPhone. Changes on the farm come with some friendly inter-generational conflict at times. Bill Turner jibes his son about the robot, “These young guys haven’t paid their dues on the three-legged stool.”

The Turners and other dairy farms can’t sustain themselves on the milk check anymore: the federal price that farmers receive for milk has been below the production costs for the past five years and the pandemic pushed the price to rock bottom. This month, farmers are losing about $7 per 100 pounds of milk they produce. The Massachusetts Dairy Farmer Tax Credit softens the blow but doesn’t compensate for the full loss. “The dairy operation can’t sustain three families,” says Turner. “To survive, we have to diversify.” In addition to the farm’s crop work, and his uncle’s maple business, Darrell has a side gig: Turner Hill Malting Company, where he malts barley for several Berkshire craft beer brewing companies. “The future looks good,” he says, “and we’re in it for the long haul.”

“I’ve been helping my father on the farm since I was a little kid. I think I started driving the tractor when I was about 8” says Ian Allen, “Anyway, I know my feet couldn’t reach the pedals.”

Fourteen years later, he’s full-grown and following in his Dad’s footsteps. He and his father, Morven, are business partners, running Balsam Hill Farm in Sheffield. Together with a handful of employees, they manage a 400-cow milking herd and 1,300 acres of pasture and cropland.

At 22, Allen already knows cows, crops, computers, and the dairy business, and can discourse on ag policy with the best of them. He earned a degree in agricultural business from SUNY Cobleskill and then went off to California for a dairy academy and later worked on other farms. “I missed the Berkshires and my family, and I really missed the farm,” he says. He came back to build on what his dad had built from nothing. “My dad is kind of my hero.”

His father came to the states from Britain when he was 22 and bought two cows and had a little barn in Housatonic where he tied them to his bumper at milking time. It’s now one of the larger dairies in the Berkshires. “I’ve put my whole life into this farm,” said Morven, “and what better thing could happen than Ian wanting to farm it? Having your son take on your farm is as close as you’ll get to a home run as a farmer.”

The farm wouldn’t have a future as a dairy without Ian. And the farm’s future depends on continued access to farmland, too. “It would never have been possible for my father to afford a farm, or for me to be a farmer, without the APR Program,” says Allen, referring to the state’s program to preserve farmland. The Allens also lease fields from more than a dozen property owners who benefit from a tax break for letting farmers work their land.

Even though it costs more to produce milk in New England, Allen says it’s important to keep dairy local because it ensures we won’t have shortages during times of crisis, like the pandemic, or weather disasters caused by climate change. “If the farms close here, we’ll be getting our milk shipped in from the Midwest.”

Allen fears that misinformation, including how the farmers treat their animals, has turned consumers against dairy farmers at a time when they need them most. “People don’t understand what we do,” he says. That can be remedied with a little communication. “We like to talk, so talk to a farmer.”

Massachusetts is supportive of its agriculture and realizes that sustaining farms and farmland is key to the state’s food security. Two state farmland protection programs are key to sustaining dairy farms like Turner Farm and Balsam Hill Farm.

The Agricultural Preservation Restriction (APR) Program makes land more affordable and available to farmers by paying farmland owners the difference between the market value and the agricultural value of the land. In exchange, the land is permanently restricted to agricultural use.

Chapter 61A  is a current use taxation program that assesses farmland for its agricultural value, thereby reducing property taxes for the landowner while supporting local agriculture. Farmers or non-farm landowners owners who lease their land to farms may enroll in Chapter 61A.

The Dairy Farmer Tax Credit Program is essential to dairy farms in Massachusetts, because it’s a safety net that kicks in each month that the milk price paid to farmers drops a set amount below the cost of production. That’s been the case almost every month for the past few years. The credit is based on the amount of milk the farm produces and can be applied to the income tax or corporate excise tax. Almost every dairy farmer benefits from this program and most will tell you they wouldn’t be in business without it.