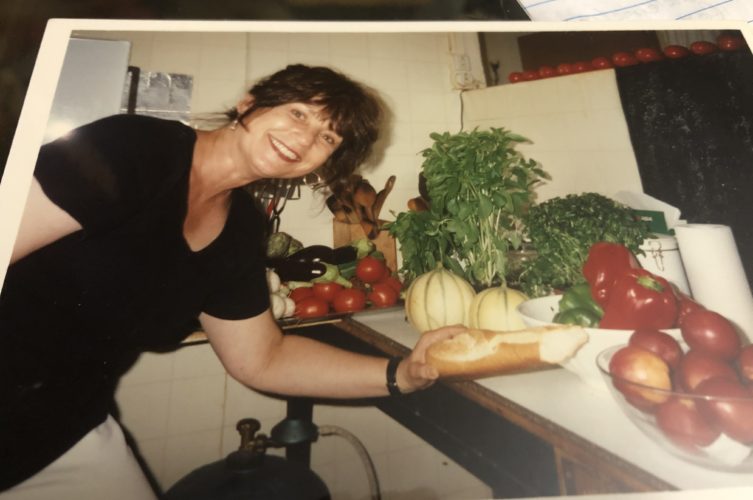 The author in her kitchen -- in a more companionable era.

Meals are becoming joyless and time is meaningless. I can go to sleep at 2 a.m., get up at 10, have breakfast at 11, lunch at 3 and dinner whenever. It’s  4:28 p.m.as I’m writing this and I have just poured a glass of cold white burgundy instead of my usual 7 p.m. pinot noir. All the old demarcations of the day have become fluid or have disappeared entirely. My calendar is empty except for an occasional Zoom get together with friends. Zoom was exciting and innovative at first when we thought that we were living in a state of the temporaries. Now it’s become boring and tiresome. Conversations center around the narrow aisles at Guido’s versus the empty shelves at Big Y. My guy friends discuss the pros and cons of letting their wives give them haircuts. My gal friends and I wonder if the holes in our pierced ears will close up if we stop wearing earrings. No one has anything new to say, including me.

What I look forward to during these dark times are meals, which more than anything, mark the passage of time. I love to cook and entertain and I’m still preparing delicious dinners with good wines, flowers and candles on the table, but there’s no one to entertain, no one to toast, to nurture, to be nurtured by, share stories with…..  except me and, lately, even I fail to excite me.

And so, during these solitary times, my mind returns to the memorable meals of my past… meals I was able to share with family and friends. As Andrew Cuomo reminds us his in daily Corona updates, his Sunday family spaghetti dinners were never about the food but, rather, an excuse for getting family together. For me it’s always been about both.

When I was a child, maybe seven years old, sitting with my brother in the back seat of the family car,  my mother would try to entertain us on the long ride to our country home. The game she made up was not “Geography” ”or “Trivia” but rather, “Death Row.” “Kids,” she’d say, “Imagine you’re on death row, you’re going to be executed in the morning, and you can choose any last meal.What would it be?” We loved that game, At least I did. I always made lobster the central part of the meal, accompanied by potato pancakes and ending with strawberry shortcake. It seems that my love of good food began in the back seat of that car.

Now with no one to share strawberry shortcake with during this plague, I revert to my own remembrances  of things past…….meals and experiences embedded in my culinary DNA.

There was that debut dinner I made in my first apartment in Paris when I was 45 years old and had just moved to France after spending most of my life in the New York area. My  entire 3-room pied-à-terre  was no bigger than my pre-divorce, suburban garage but it was all mine. I’d invited two friends for a home cooked dinner. I picked up a duck on my way home from work, I had prunes soaking in Cahor wine on a kitchen shelf and sage in a planter on my petite outdoor balcony. When I pulled the duck out of the wax paper and was about to soak it in the wine sage marinade, I noticed feathers sticking out of the bird. Merde! There was no time to pull them out. So I put it in the oven and when I took it out the feathers were miraculously gone. They had melted in the heat. The dinner, the conversation and the bonhomie turned out to be perfect. My guests raved about the meal and when they asked how I made the duck, I lied and said it was an old family recipe, handed down from my grandmother….canard avec des prunes et des plumes. Duck with prunes AND feathers.

And there was the Thanksgiving in Paris, in my next and larger apartment, where I set the floor with a white sheet, faux sterling silver candelabras, bouquets of wildflowers and crystal wine glasses. Twenty-seven ex-pat and French friends sat cross-legged around the “table” dining on turkey (“dinde”)  flown in hours before from Burgundy. The feathers were plucked and blow torched at my locale boucherie. Cranberries from Fauchon added to the feast and friends made the pumpkin and apple pies and the sweet potato casseroles. I baked my favorite recipe of apricot tart from “Patricia Wells’ Food Lovers Guide to Paris” and, at midnight, we cleared the “table”, turned it into a dance floor and got high on weed brought in by Cory who had just returned from Amsterdam. My concierge, Mme Leviant, was invited because she had always wondered what a real American Thanksgiving was like. Poor thing, after that one, she still will never know.

Another meal — if one could call it a meal— was my daily breakfast in France at Chan Parker’s farmhouse where I lived when I first moved to France. Chan was the widow of the jazz legend, Charlie Parker, and the mother of a friend of mine in New York. Mme Parker was a glamorous bohemian and a happy lush. Food meant nothing to her.  She would begin her mornings with a glass or two of kir, followed by a baguette which she pulled out of the freezer, before toasting  and smearing it with melted Camembert cheese.  She served it with a side of radishes dipped in sweet butter. To this day, it’s one of my favorite food memories.

And then there were the Passover meals of my youth, the huge table laden with the traditional Seder plate of haroset (apples, honey and nuts which symbolized the mortar used by slaves in Egypt) egg, parsley and lamb shank. Few of us fasted that day so it was a feat to finish the onslaught of matzoh ball soup, gefilte fish, brisket, roasted chicken, and  tzimmes, that traditional Passover dish made with sweet potatoes and prunes.

But, it was not just the food that made those meals so memorable. It was the confusion and laughs around the table as my grandfather led the Seder from the Haggadah he got from the A&P supermarket while many of us were reading from different prayer books, given out by the local bank or Maxwell House coffee. Papa would say, “kids, turn to page 6” and he’d read about the Red Sea parting while, in our various books, the Pharaoh was ordering the drowning of first born males or the Israelites were marking their doors with lamb’s blood.

Every year, we had a surprise guest and it was always Dr. Steinfelder, who delivered us kids (not from slavery, but from the womb) and every year we giggled and pretended to be stunned. But, the best part of the evening was the arrival of the prophet Elijah. The doorbell would ring and there was Uncle Murray, wrapped in a white sheet over his naked body, his skinny legs protruding. Oh, how we laughed before we returned to the Ten Plagues and the remainder of the meal, the sponge and honey cakes and macaroons.

Those memories of food and family feel so far away, especially this year — the year of the eleventh plague. Friends zoomed their families on Passover as they sat alone in their kitchens or at their dining room tables, eating their single portions of matzoh ball soup, picked up with disposable gloves from Barrington Bagels or Zabar’s or Whole Foods. I made matzoh brei but, otherwise,  passed over Passover. Next year will be different, I hope, when we’ll be released from this new slavery of hug-less, kiss-less, solitary dinners.

For now, I’m grateful for memories of past favorite meals, death row or otherwise.