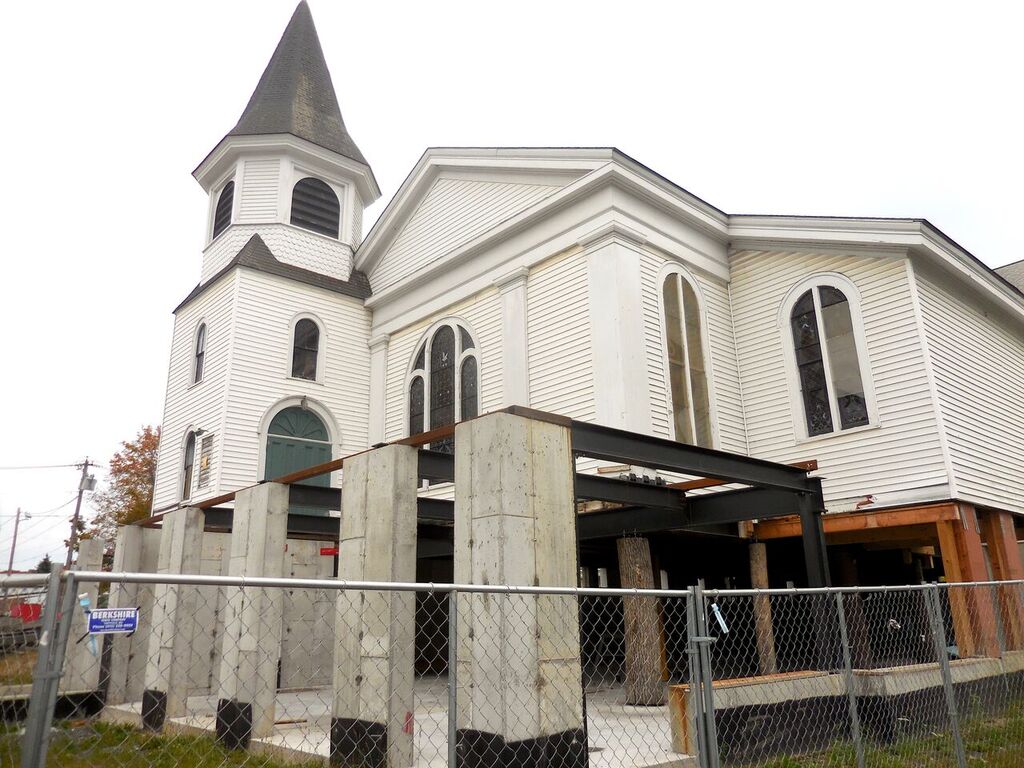 Work will start again soon at the former United Methodist Church at the intersection of Main and Rosseter streets, where developer Paul Joffe plans a mix of retail, office and residential space. Photo: Terry Cowgill

Great Barrington — Known locally as the flying church for its newly elevated foundation that beckons southbound travelers on Main Street, the United Methodist Church has been in a holding pattern since June, with the concrete forms pushing the steel crossbeams aloft to no discernible end.

The lack of activity had led many to believe that the developer, Paul Joffe, had run out of money. Not so, Joffe said in an Edge interview. While the reason behind the inactivity isn’t terribly pleasant, it should come as a relief to those who feared the project was kaput.

“I’ve been sick with Lyme [disease],” a weary Joffe said this week.

After a three-month hiatus for the winter, Joffe had more work done on the foundation in May, including installing a vapor barrier and pouring the concrete floor and connecting sewer and water lines.

Shortly afterward Joffe fell ill. Joffe works a lot on his property in New Marlborough. One of his projects has been to cut wood there to fashion beams from the felled trees. Then he installed them in the basement of the church to create a rustic feel for the restaurant he plans to put there. But that kind of work can expose one to deer ticks, the insects that spread Lyme disease.

“I don’t know what happened,” Joffe said. “I’m very careful. I wear a Tyvek suit when I go into the forest.”

Joffe looks healthy now and is on the mend after a period of heavy doses of strong antibiotics. He’s well enough to be out and about but still tires easily. And he’s had Lyme before so he knows the drill.

The project was suspended because, unlike many other developers, Joffe is a hands-on boss. He’s at the site most of the time, not only making sure things are done to his satisfaction but lending a hand to the contractors in order to keep his costs down.

As for people noticing the inactivity and asking about it, Joffe said, “It’s a great thing that everybody sees it and cares.”

Joffe said the plans for the reuse of the building have not changed but the projected completion date has been pushed back to about 12 months from now, perhaps a little longer.

Joffe bought the land and structures from the church in 2013 for $425,000. Total project costs are not yet known, Joffe said, though he told the Edge in 2015 he expected to spend $1.2 million when all was said and done.

In order to install a new foundation and create more space in the basement, Joffe had the 1845 wooden structure – Great Barrington’s oldest church – raised 6 feet, 9 inches in late 2015, with the expectation that the reconstruction would be completed in 2017. Earlier, he had demolished the parsonage.

But Joffe didn’t want the parsonage to be a total loss so he’s employed an innovative technique: Use some of the materials from the demolished parsonage, such as the timbers, to renovate the church itself and build a food kiosk that will sit where the parsonage used to.

Joffe and his company, GB Historic Preservation LLC, plan a restaurant downstairs. Upstairs will be a mix of office and retail, and perhaps a studio apartment. The exterior will be Greek Revival-style, similar to how the nearby Great Barrington post office looks.

The church was elevated to secure the foundation to today’s standards, Joffe said, and the developer seized on the requirement as an opportunity to increase the building’s space.

On Halloween 2015, Joffe held a party for the community. Near what will be the Main Street entrance to a planned restaurant on the first floor, Joffe and his supporters buried more than 100 stainless-steel time capsules.

Joffe and his staff used a pneumatic wrench to seal the capsules with desiccants and argon so that the items inside will be less vulnerable to decay. Several past and present town and regional officials were on hand to bury their own capsules and watch the proceedings.

This is not Joffe’s first foray into reusing a church. He finished another church restoration in Kingston, New York, in 2011. That project included saving a 200-foot steeple and converting the church into a chapel for same-sex marriages, which had just been legalized in New York. He has also renovated six buildings in Brooklyn, New York.

In 2015 Joffe found himself briefly in the national media spotlight when he purchased the domain name BernieSanders.com before the presidential campaign of Sen. Bernie Sanders had noticed. A big Sanders fan, Joffe later donated the domain to the campaign in exchange for a meeting with the senator.

Meanwhile Joffe will continue his work in Great Barrington even through the winter. Passersby should see more activity, though some of it will be conducted out of the sight of the road. He is looking forward to the project’s completion as much as is everyone else in town.

“It’s going to be a beautiful place,” he said. “Nice looking, but in an old way.”