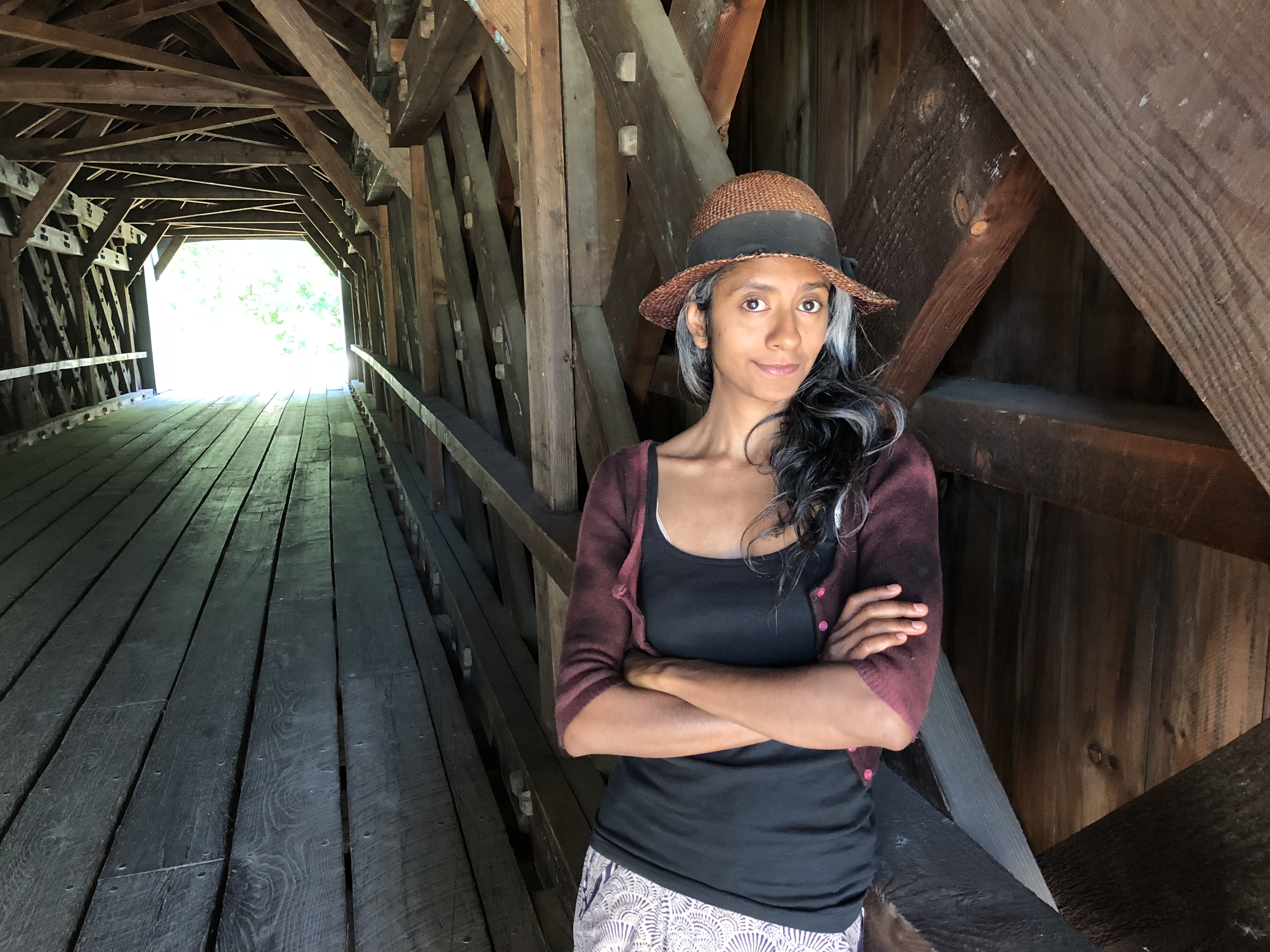 Sheffield – For those who have been entranced and elevated by the ritual theatre productions of Rogue Angel Theatre’s Pooja Prema, set in a variety of environments, you’re in for another treat.

At the moment of the summer solstice this Thursday, June 21, and for the three days following Pooja Prema is performing her latest creation, “Flowers Falling from my Mouth” at the Old Covered Bridge just off Route 7 in Sheffield.  The current structure is replica of the 1837 covered bridge, rebuilt in 1996 after the original was destroyed by fire. The performances takes place at 7 p.m., June 21 through 24, inside and outside the bridge.

Pooja describes “Flowers Falling from my Mouth” as a “solo ritual dance theatre play about love and loss, women and men, war and peace.” Pooja herself has become something of a Berkshire ritual. She graduated from from Bard College at Simon’s Rock in 2003 and for the past six years she has introduced audiences to mysteries of the spirit through her ritualized theatre – in solo performance or with a cast — at locations such as the Green River in Egremont, a tunnel in Housatonic, the railroad track in back of the Triplex Cinema, and at her pop-up improvisational theatre in Rotary Way – the alley outside Rubi’s in downtown Great Barrington– as well as her seasonal costumed dinners occurring in Berkshire hilltop meadows.

In her 2014 creation in the Green River, for instance, the audience sat on the bank at sunset, as shadows were long and the water dark, witnessing Pooja robed in scarlet walk upstream, and then, dressed in flourishing white, re-emerge from behind a bend in the river, and make her way downstream, her white garment floating out around her. Her slow, deliberate progression was mesmerizing – joining the call of the birds, the whisper of the wind, and the ripple of the water into a unity of expression.

And it this narrative built upon ritualized movement embracing the natural environment that will be realized in her latest work. While walking through the replica of the 1837 covered bridge, rebuilt in 1996 after the original structure was destroyed by fire, Pooja explained the “Flowers Falling” was a solo piece, accompanied by cello.

“I’ll be singing a song,” she added, “but the music during my performance will combine jazz and classical – and be improvisational. Beth Craig will be playing the cello. This is a low-tech show: the bridge and me and the cello—and the audience.”

Open to pedestrian traffic, the Old Covered Bridge spans a languid stretch of the Housatonic River, and is the centerpiece of a small riverside park. There is a narrow sandy beach on the western side, as well as a small parking lot.

“I’ve known this place, and I feel connection to it. Just as this bridge unites the banks of this river,” she said, striding through the bridge’s canopy of aging wooden trusses, “I am trying to bring opposites together. I am the bridge. How do you create peace, peace between men and women since patriarchy appeared — a hierarchy of gender that is much older than human beings? In my work here I’m going to the root of things.

In her art, she is recreating a modern ritual, using music, spoken word and drama to tie community together. “It’s not about entertainment,” she said. “This is sacred science. How many times can you witness a live interactive experience that compels you to think deeply about the confluence of influences, about gender, origin, woven in a way that’s coherent?”