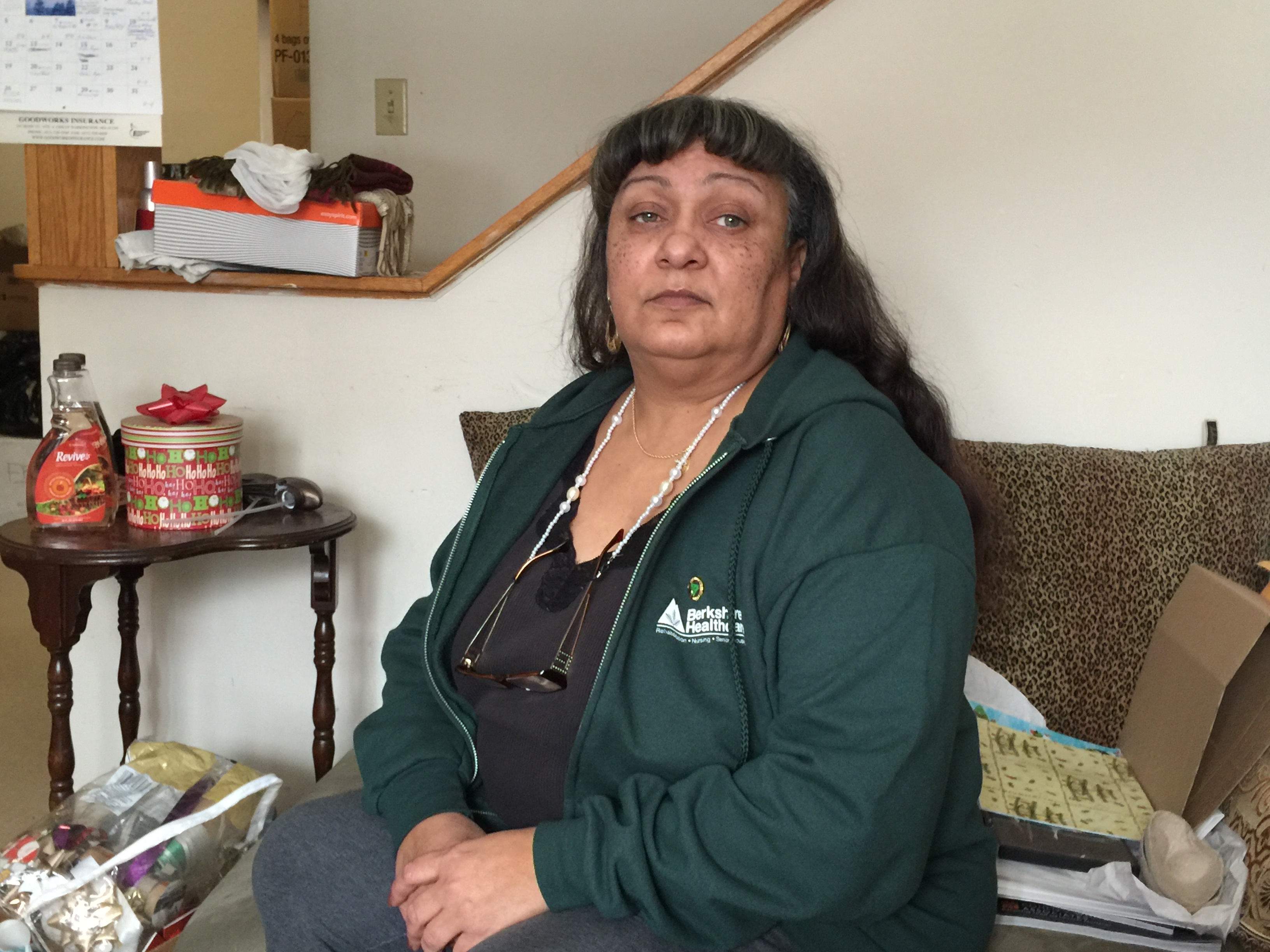 Ariane Blanchard and her physician say moisture and mold at her home in Flag Rock Village in Housatonic has destroyed her autoimmune system, making her too sick to work full time and sinking her into deep poverty. She is suing the Great Barrington Housing Authority and needs a settlement to move out. Photo: Heather Bellow

Housatonic — I’m sitting at Ariane Blanchard’s kitchen table with her lawyer when she brings me a Ziploc bag containing a solid chunk of what she says is mold-filled debris.

“That’s what came out of the bathroom fan,” she tells me, noting that the exhaust fan was installed by the Great Barrington Housing Authority (GBHA) six months ago and operates only when it registers humidity. “It’s going to be sent for analysis.”

But Blanchard, who used to sit on the GBHA herself, says what came out of the fan is the least of it at three out of 18 family homes in Flag Rock Village, low-income Section 8 housing that Blanchard says was “built on a swamp” in 1995 with nothing between the linoleum floors and the dirt but a cement slab.

She shows me where part of a tile broke off and, indeed, there is the cement.

The floors actually sweat from the moisture and, on frigid days like today, it feels like a “block of ice radiating right through the soles of my shoes.”

Blanchard and her neighbor say the resulting systemic mold created a toxic building syndrome that has made them sick. And remedies ordered by the Board of Health can’t be used because, her physician says, they will increase airborne mold.

Blanchard takes me around the house, showing me where, despite intense cleaning with bleach over the years, mold stains persist and the floors are stained from the bleach.

In Blanchard’s case, her health problems have grown chronic and serious enough to sink her into a deeper poverty than what began around 13 years ago when she had to find a place large enough to take in her grandmother after Blanchard’s mother died. She gets hives, severe swelling in her ankles, stiff joints, and she has to take regular medications and steroids for flare-ups. “I’ve never been sick until 2011,” she said.

Things haven’t always been so hard for this Bronx, New York, native, who’s lived in the Berkshires for 32 years. She used to be a full time executive in an advertising agency and later owned and ran a Section 8 housing home herself in Pittsfield. Now health problems keep her from working 40 hours a week, and instead she’s a receptionist at Fairview Commons Nursing Home eight to 10 hours per week.

Blanchard sued the GBHA, a state-funded agency that functions under the aegis of the state rather than the town and is funded by U.S. Housing and Urban Development (HUD). GBHA is overseen by the Massachusetts Department of Housing and Community Development (DHCD).

The suit alleges a violation of the state sanitary code, which her attorney, who did not want his name used in this story, said is in mediation, though that changed this week after a state official didn’t show up for the settlement meeting. “We are prepping for trial,” Blanchard later said, noting that the state is trying to “low ball me to set a precedent for future cases.”

She said the settlement is to help her get out of this house. And her problems don’t end there if you are in a boat like hers, since, right now, there is a more than four-year wait for Section 8 housing in Massachusetts with over 4,000 people on the waiting list, her lawyer told me.

He further said that, because the original source of funding for Flag Rock is federal, “HUD would be paying the settlement” for Blanchard. This, he added, would subject the housing to EPA (U.S. Environmental Protection Agency) standards. He said this was “key” to Blanchard’s case.

“This is sick building syndrome,” he added. “EPA regulations are applied to almost every other building, most notably schools that take federal money.”

Blanchard has lived here since 2005 and wrote her first letter to the GBHA about the mold problem then before she started to develop symptoms and an autoimmune disorder, what her physician, Eric Bush at East Mountain Medical, has stated in correspondence as being caused by “mold toxicity.”

In those earlier years, the moisture was so bad that, when she went away for a weekend, she came home to a “green kitchen” and furniture that was so coated in mold that she had to throw most of it out.

While Blanchard may have already been susceptible, having a “lupus-like” condition during one of her pregnancies, the mold, along with the constant use of bleach by the GBHA, has “destroyed her autoimmune system.”

Both her children, now in their 20s, are “allergic” to the home and can’t come back and stay in it per doctor’s orders, her attorney said.

She continued to tussle with the GBHA over these last 12 years, and her requests were “only met with Band aids,” she said. She shows me where outgoing Great Barrington Health Agent Jayne Smith ordered a section of wall cut out near the floor all the way around the boiler room in an attempt to get rid of what air testing indicated was stachybotrys mold, the infamous “black mold” known for wreaking havoc on human health.

But Blanchard said Smith also noted that the inside of the walls needed to be investigated, but GBHA “refused” to do it. Also, GBHA never bothered patching that section back up, leaving it open for vermin to wander in. She says she occasionally finds snakes and toads inside her home.

Smith also directed the installation of industrial dehumidifiers, but that shot everyone’s electricity bills up to $45 extra per month, Blanchard said, that the housing authority would not cover but for $6, starting an endless cycle of shut-off notices and harassment from National Grid.

Flag Rock tenants pay rent of 27 percent of their income.

Blanchard’s attorney said Dr. Bush told her not to install the dehumidifier because it will “recirculate the air” and anything in it.

Her attorney further said the GBHA can’t afford to install systems with expensive micro-air cleaning HEPA [high efficiency particulate arrestance] filters “where these tenants have to pay the electricity.”

But Blanchard’s refusal to allow the dehumidifier installation has undermined her case a bit, since Smith’s order says the Board of Health won’t hold the GBHA responsible for moisture problems until this happens.

Blanchard’s attorney said mold was growing again at the house next door just two months after the dehumidifier was installed, and that former tenant Sarai Liebenow said that indeed was the case. “It helped in the area around it,” she said. “But even after that, there was still mold and moisture.”

She said an industrial hygienist came and inspected it and found it needed to be adjusted, but that was of minimal help. Liebenow was evicted for withholding rent—on her lawyer’s advice–until the moisture issues were fixed by GBHA.

However, Smith’s letter to the GBHA says the spores were reduced in both homes after the 2015 dehumidifier installation and said the order had been “satisfied.”

Liebenow’s asthma worsened when she lived there for a few years with a toddler and infant who was born when they were tenants. Both children had developed asthma and were on nebulizers “constantly.” Their pediatrician documented that “the environment is making them worse,” she said.

“I tried to keep them out of house as much as possible—they were better when they weren’t there,” she added.

Liebenow said the trouble started when she first moved in. “I remember waking up one morning and there was a layer of water on the floor and [the toddler] slid and fell.”

She said the GBHA is “supposed to disclose the mold and moisture issue” to any new tenants of her former house, and she worries about new children being exposed.

At Blanchard’s house, the moisture rises to the second floor. It’s so bad she had taken to blow-drying her sheets before bed until her physician stopped her, saying that would recirculate mold into the air.

While Smith declined comment for this article, her official notices of housing code violations shows she was all over these three homes. She had seen the “mold and mildew-like substance,” and told the GBHA it had to fix gutters, repair damaged vinyl siding, and do some grading and landscaping, among other things that varied somewhat among the three units. But they did get done with Smith’s prompting, Blanchard said, though some of the work was done “incompetently.”

The GBHA also has 32 elderly units each at Flag Rock and Brookside Manor, and 22 units at Dewey Court.

GBHA Executive Director Barbara Heaphy told the Edge she can’t comment because of Blanchard’s litigation. And a GBHA board member, who did not want to be identified, expressed frustration over this muzzling, and issued the only statement she said she could.

“The documentation on public record shows that remediation is complex,” the board member said. “The GBHA worked with the Board of Health and under the direction of state certified engineers and multiple testing and inspections throughout the process.”

She further noted that the GBHA “complies with municipal codes and regulations.” She also said the GBHA has a “comprehensive protocol for preparing an apartment for new occupancy and that they absolutely want to insure that apartments are not only clean and in good order but absolutely safe when rented.”

But the GBHA may have found itself with a lemon in its lap. Blanchard’s attorney said it was built at the edge of a wetland, at the base of a hill where “you can see where the water runs.” He said a heavy rain will bring the water almost right up to the house. “That’s why no basements were put in,” he added.

“Jayne [Smith] made them regrade,” Blanchard said, “but they didn’t hire a professional, just a snow plower, and they screwed it up.”

Maranba Builders Inc. out of Hartford, Connecticut, built Flag Rock. According to the Secretary of State, the company dissolved in 2012 after about 30 years in business. The architect on the project was Dietz & Co. out of Springfield.

Both Blanchard and her attorney say Blanchard is speaking for others in the community of 53, including children, and that the adults are afraid to speak out on any number of issues for fear of “punishment” or a loss of housing.

But, according to that GBHA board member, we only know the half of it. “We won’t know the story from both sides until the litigation is final,” she said.

Blanchard, a smoker, scoffs at the possibility that the GBHA will force a no-smoking policy on tenants, though she understands that is going to come from the feds. But she points out an inconsistency.