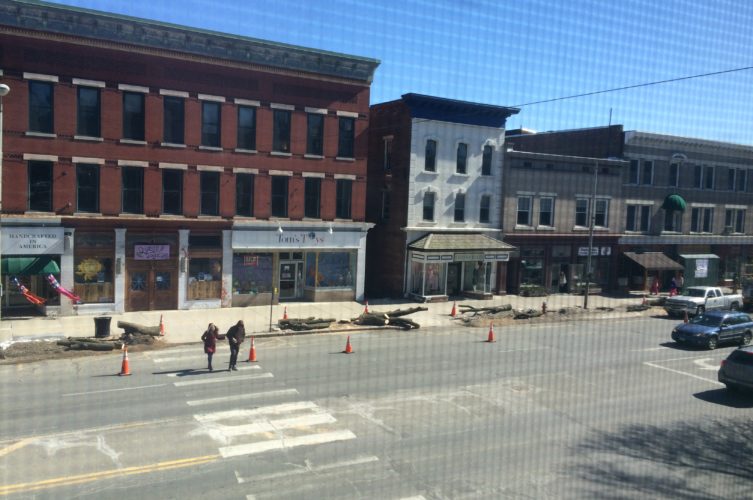 Great Barrington — It is the season of renewal and blossoming, for all but Main Street’s pear trees.

A crew from Maxymillian Technologies is busily sawing down the allee of pear trees that for 35 years has lined either side of Main Street.

The first of the 35-year-old Bradford pear trees was cut down on the east side of Main at around 8:30 a.m., in front of Emporium. As the first tree’s branches were loaded into a chipper, a police officer at the site said the tree removal crew had gotten a late start due to trouble with that machine.

The clear cutting did not go without incident, however. Around noon, a falling tree branch clipped off a Cobra-headed street lamp in front of the Gypsy Joynt.

The officer further stated that it may take two to three days to remove all the trees. The east side trees will be taken down first; they are a bit more complex, he added, since cables and wires run through some of branches. The west side trees are next: those trees are larger since they get more sunlight.

The work began in earnest between Bridge and Church Streets at 7 a.m. Monday morning, and a northbound backup on State Road and Route 7 was already aggravating the morning commute. On Tuesday the work on the sidewalk and parking areas moves to the west side of Main, between Castle and Elm Streets. According to the Southern Berkshire Chamber of Commerce’s (SBCC) construction update, there might be “traffic shifts” depending on the scope of the work. Indeed, during the morning “rush” hour – as much as there is a morning commute shortly after school begins, atraffic was backed up to Plaza Package on State Road.

On Wednesday, the sidewalk on the east side of Main is slated to be cut in half in preparation for sidewalk removal, starting on the east side of Main between Bridge and Church Streets. It will be done in stages, explained SBCC Executive Director Betsy Andrus. In the first phase, the sidewalk pavement nearest to storefronts will be removed; in the second phase, the sidewalk nearest the street will be replaced. But at all times, she added, there will still be access to businesses, and two-way traffic will be maintained constantly by police officers directing traffic.

The Main Street Construction Project is a $5.4 million state Department of Transportation (MassDOT) plan to improve the one-half mile stretch on Route 7 from St. James Place — also known as Taconic Avenue — north to Cottage Street. The project will replace roads and pavements, “improve sidewalks, drainage, curbs, traffic signals, crosswalks, and lighting,” according to the Town of Great Barrington. The reconstruction will also add better crosswalks, and bike lanes.

The project will proceed throughout this construction season, and into the following year. During the tourist season in July and August, work will be suspended in the downtown core, from Bridge to Elm streets.

All work begins at 7 a.m. and ends at 3:30 p.m., Monday through Friday. After 3:30 pm, all traffic flow is back to normal. For weekly updates, click on the green button on the right side of The Berkshire Edge homepage, just below the “search” window. The button connects to the Southern Berkshire Chamber of Commerce construction updates (scroll down to see the latest construction update). During the reconstruction, the Chamber will provide daily updates on the project, with schedules of where work will be proceeding.