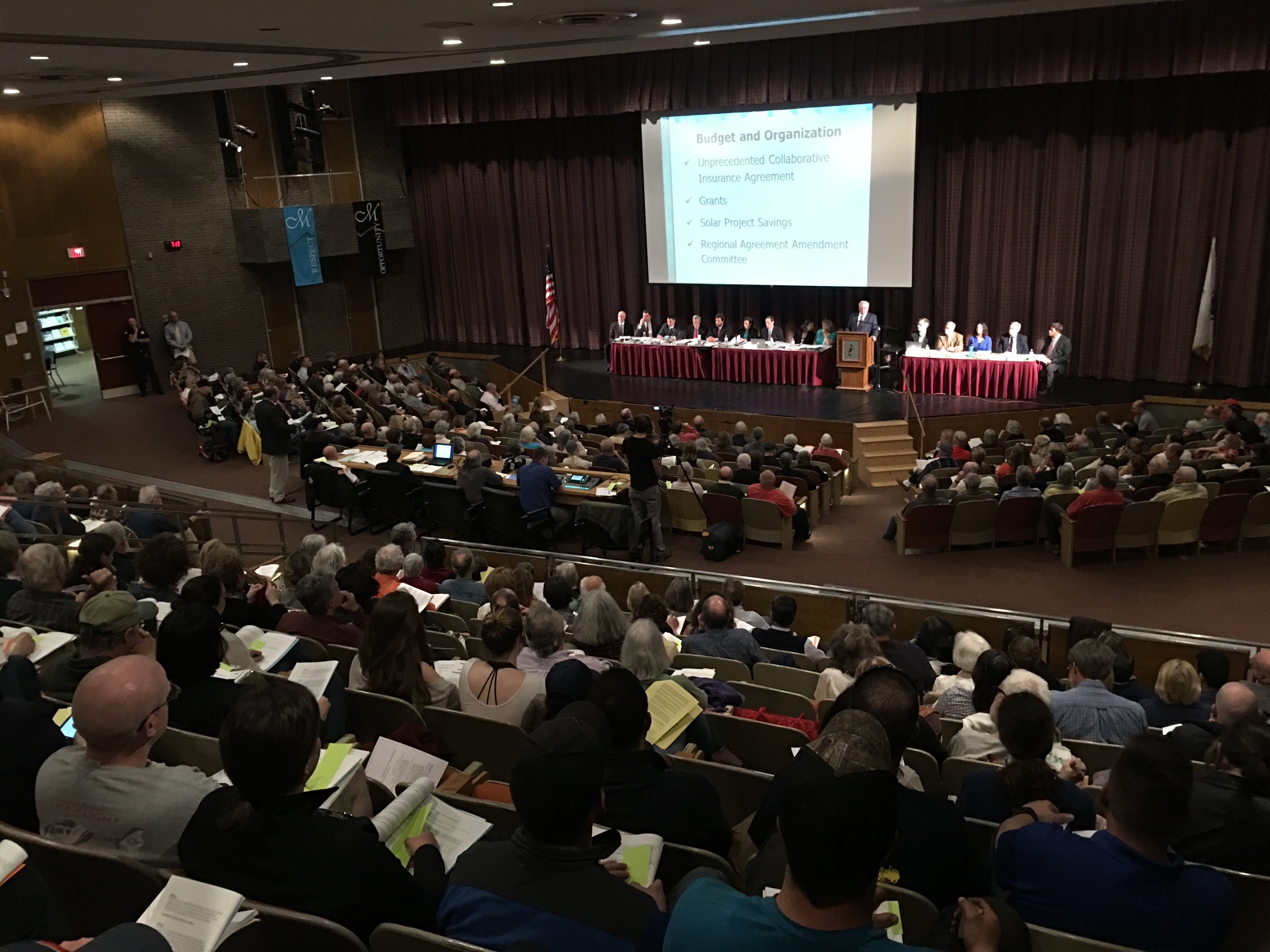 Great Barrington — For the first time in recent memory, the Berkshire Hills Regional School District’s $25 million budget went down to defeat at Great Barrington’s Annual Town Meeting May 9 by vote of 215 to 176, apparently the victim of taxpayer weariness and anger with the lack of a revised Regional Agreement that currently has Great Barrington paying 52 percent of school costs among the 3-district towns.

“I’ve been moderator for 21 years, and lived here for longer, and I’ve never seen or heard of a school budget defeated,” commented Town Moderator Edward McCormick at the conclusion of the 4-hour meeting at the Monument Mountain Regional High School auditorium.

The defeat will not affect programming this year, provided Stockbridge approves the budget next week. West Stockbridge approved it last week. Great Barrington will, however, have to hold another town meeting to appropriate the town’s $14.5 million share of school funds.

The district has seen increases in salaries and benefits due to rising insurance costs that drive the budget up every year, and this year Great Barrington’s obligation will have increased by $938,000 over last year, even though each year the district cuts close to the bone, nearly wiping out art and music programs to try to keep the town’s taxpayers from yet another heavy hit to the wallet.

The way this three town pie is divided was cited by Great Barrington taxpayers as the primary reason they overwhelmingly voted down two proposed renovation projects for 50-year-old Monument Mountain Regional High School, a building that badly needs an overhaul.

Lately, the pressure and fervor to change this agreement has increased, and school officials convened the Regional Committee Amendment Committee (RAAC) last fall to see if the three towns could work out a solution. But after a handful of meetings between representatives from each town and the school committee, it became evident that Stockbridge representatives were not interested in changing the agreement.

This apparent stall out turned the heat up under Great Barrington residents, including the Green Tea Party (GTP) a newly formed group who claim their mission is to make Great Barrington economically vibrant and sustainable. Members of the group publicly encouraged town officials and residents to make a “symbolic” no vote on the budget to send a message to both the RAAC committee and state officials.

There were emotional pleas to support the budget. “It does matter the message you send to these young people and it does matter that you support public education,” said Monument High Principal Marianne Young, her voice cracking.

Roselle Chartok said this financing battle should not be fought “on the backs of thousands of students.”

And Leigh Davis said rejecting the budget to gain leverage for the deteriorating RAAC talks was playing “political football” with schoolchildren.

It may be that Chip Elitzer, who sits on RAAC and has engineered several rejected proposals to change the funding method, sealed the fate of Monday’s budget vote when he made a call to reject the budget being presented at the Annual Town Meeting as ammunition to push for a uniform tax rate at RAAC, but to vote yes on the budget at a special town meeting in 45 days in order to avoid school district financial hassles and possible state interference.

“We need to fix a funding mechanism that if it is not fixed, will break our schools,” he said, adding that the whole purpose of voting no in this instance was to get the district on sound financial footing to take it far into the future.

“If we don’t do it,” he said. “We’re dead in the water for another year, I guarantee it. Because Stockbridge doesn’t have to do it.”

School Committee and RAAC member Richard Dohoney told the Edge he didn’t think the budget defeat would have an “immediate impact on the district but it may be a step backwards for broader strategic goals like expanding the district.”

Stay tuned for further reports of the other decisions made at Town Meeting, including a resolution opposing General Electric’s PCB dump in Housatonic and the narrow approval of CPA funds for the restoration of the Unitarian-Universalist church in Housatonic and additional funds for affordable housing at 100 Bridge Street, the former New England Log Homes property.