There may be differences of opinion about details and sharp disagreements about prior events and the aftermath, but there is no doubt that the basis for our national holiday of Thanksgiving is a three-day feast held at Plymouth Plantation in the fall of 1621.

What details we do know we learned from two sources: a letter written in 1621 by Edward Winslow and an entry in Gov. William Bradford’s Of Plymouth Plantation. 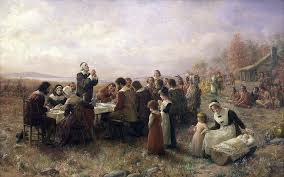 Edward Winslow: “And God be praised we had a good increase [and] our Governor sent four men on fowling so that we might after a special manner rejoice together…many of the Indians coming amongst us…King Massasoit with some ninety men whom for three days we entertained and feasted. These things I thought good to let you understand so you could on our behalf give God thanks for having dealt so favorably with us. ”

Upon that brief picture of life in Massachusetts almost 400 years ago we built a national holiday. On that day the pilgrims were replicating an ancient harvest celebration, and the Puritans were celebrating in the only manner that strict Calvinism allowed. (Puritans were allowed to celebrate only the Sabbath, fast days, and days of thanksgiving.) The combination of the two traditions created the holiday we know.

During the Revolutionary War, the Continental Congress twice declared a national day of thanksgiving in 1777 and 1782. President Adams proclaimed a national thanksgiving day in 1798. However, it was in 1865, in the midst of another war, that President Lincoln created an annual national holiday and called it Thanksgiving Day. 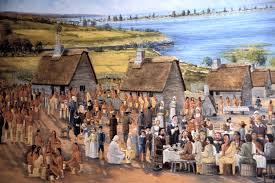 In the 1890s, a time of passionate nationalism and great plenty, all the trimmings were added and the holiday blossomed into one of the most popular on the calendar. At the same time the pilgrims (sadly undifferentiated from the Puritans in most stories) were idealized and the three-day feast in 1621 was made a model for brotherhood and good governance; a symbol of both democracy and “the new Eden.”

When asked to write a column about Thanksgiving, I wonder if folks mean the whole story, not just the attractive bits.

The pilgrims landed in 1620 and attempted to create the settlement they would call Plymouth. The seeds they brought from England did not thrive in North American soil. The land was strange and wild. Many were weakened by the long voyage and by illness. Many were discouraged and some were flat out scared. All were far from thriving when an Indian found them. In the fall of 1621 there were 53 remaining, and Bradford’s entry reflects what they survived and overcame.

“They began now to gather in the small harvest they had, and fit up their houses against winter being all well recovered in health and strength [because] all the summer there was no want and [we] had all things in good plenty. There was a great store of water fowl and wild turkeys and Indian corn…which made many write so largely of their plenty here to their friends in England which was not feigned but true reports.”

That summer of plenty was in large part due to the efforts of an Indian who came to their rescue. His name was Squanto. He was a Patuxet living among the Wampanoag people. The closest thing to a miracle in the New World was happening upon a native who spoke English; a man who could help them and teach them because he could communicate. How was it that Squanto spoke English?

Here is the first sad truth. The slave trade in the New World did not begin with Blacks kidnapped from the African continent and taken to America. It began with Indians kidnapped from America between 1614 and 1620 and taken to Europe. Squanto was one such Indian. He was enslaved in England, learned the language before escaping and finding his way home. When he arrived home he found his people destroyed, murdered, kidnapped, or scattered. And yet he helped the next Europeans he found on his door step, and because of that good will, there was the first thanksgiving meal in the new world. 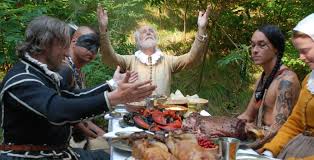 What we know about the first proclamation of a thanksgiving day in the new world is this: in 1637, sixteen years after that meal, Governor Winthrop named an official day in celebration and thanksgiving for the safe return of a hunting party. They were hunting Indians and they slaughtered 700 men, women and children. In the proclamation, Governor Winthrop thanked God for His help in “eradicating the heathen.”

This is not meant to dissuade celebration or turn the turkey to ashes in your mouths. Giving thanks is a good thing. Being grateful and satisfied are good for the soul. And yet, our history is not a Disney animated movie with a pretty sound track; there is the other side to the story. Perhaps the best way to rectify the two sides is to remember to thank the American Indians – specifically Squanto and the Wampanoag tribe of the Algonquin nation – for the lives of the original settlers and the beginnings of our nation.