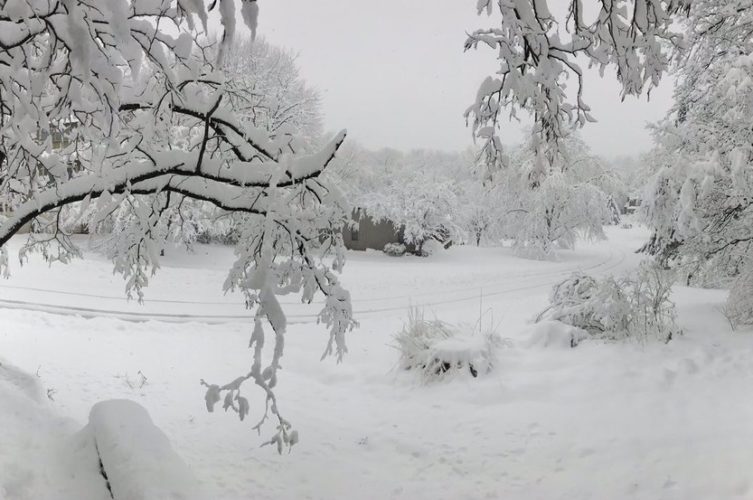 Robert Frost and his family had just moved into an old stone house in South Shaftsbury, Vermont, in December 1920, when what would become one of Frost’s most popular poems appeared in that month’s issue of Harper’s Magazine:

Some say the world will end in fire,

Some say in ice.

From what I’ve tasted of desire

I hold with those who favor fire.

But if it had to perish twice,

I think I know enough of hate

To say that for destruction ice

Suffice it to say that the poem also speaks to our time.

Or rather, it doesn’t really address any times, other than the end times of cosmological speculation. It looks inward, not outward. The speaker of the poem joins with those predicting a fiery ending for the world based on his own experience of passion, expressed through the primal sensory metaphor of tasting. That is not the end of the matter, though: “But if it had to perish twice.” The idea of a second ending is whimsical; surely one apocalypse would be enough. Then the tone changes: “I think I know enough of hate.” That sounds once again like self-knowledge, but includes a knowledge of the world. The rhymes tighten and the punctuation disappears as the poem reaches its astringently understated conclusion: to destroy, all you need is hate.

I blame the Hater in Chief. Hate, after all, has been part of his brand for many years. “Of course I hate these people. And let’s all hate these people because maybe hate is what we need if we’re going to get something done.” That hate-filled exhortation comes from an interview that citizen Trump gave to Larry King in 1989, after he had drawn attention to himself by publishing a full-page ad in the New York Times calling for the execution of those responsible for the rape and beating of a white woman who was assaulted while jogging in Central Park. You’ll recall that five black teenagers were convicted of the attack and imprisoned. They spent years in jail before the actual perpetrator was identified in 2002 on the basis of a confession corroborated by DNA evidence. Not surprisingly, Trump still maintains that the young men were guilty. Haters gonna hate, as Taylor Swift says. And voters, 74.2 million of them, though surely not all haters themselves, still gonna vote for a hater, let us hope for the last time.

The president didn’t invent political hate, of course; he just crawled into its shell. Big Brother’s totalitarian regime in Orwell’s 1984 kept the people of Oceania in line with the help of the daily “Two Minutes Hate” and an annual “Hate Week,” when enemies of the state were vilified on state-run media and at rallies. For authoritarian (and would-be authoritarian) governments, there is nothing like hating “the other” to bring people who are not “the other” together.

But what about the Trump-haters, you may ask, aren’t they just the same? True, we both snarl at each other from the same animal part of our common human nature. We share a capacity for hate. Everyone knows what Trump hates. What we hate are Trump’s lies, his corruption, his meanness, his contempt for the press and science, his assault on democracy. It’s Trump’s incessant nastiness that has set the tone, echoed by his media allies. It sets off a reaction in kind. When two of Trump’s henchmen called, in sickening detail, for violence against Dr. Fauci and the chief of U.S. election cybersecurity, I was ready to dismember the haters in return. Ice is also great.

Is it my imagination, or is the ice melting a little? When even the hateful Mitch McConnell says the election is over, I dare to think that decency and empathy, not to mention sanity, will be returning to the White House. That kind of climate change would be a blessing. I feel my own cold fury ebbing as January 20 – and Christmas – approach.

“Fire and Ice” ends with a grim evocation of the power of hate. To destroy a world, or a country, or ourselves, “ice/ Is also great/ And would suffice.”

Phil Holland, of Pownal, Vermont, has written for the Edge since 2018. He has spoken on Robert Frost to the Jewish Federation of the Berkshires and wrote about the part played by Frost in the early days of Bennington College in the Spring 2020 issue of the Bennington Museum’s Walloomsack Review.