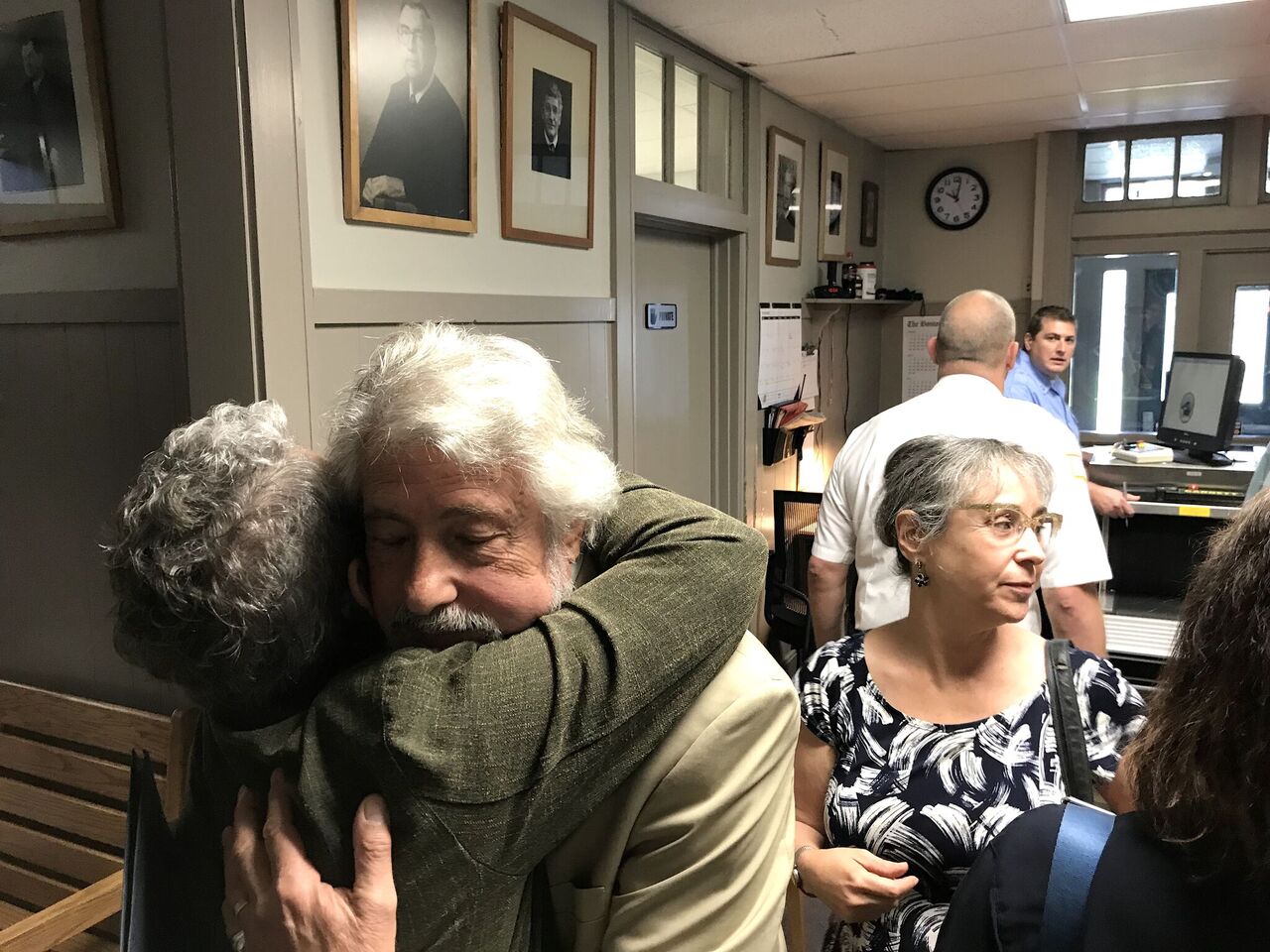 Great Barrington — A Columbia County, New York, man who, last month, shoved a bullhorn into the face of a U.S. Senate candidate admitted Thursday that the state had sufficient evidence to convict him of assaulting the provocative, screaming office-seeker.

In an appearance at Southern Berkshire District Court, Paul D. Solovay of Hillsdale, New York, did not admit guilt but conceded to sufficient facts on charges of assault and battery and disorderly conduct stemming from a July 22 altercation with Shiva Ayyadurai minutes before a campaign rally for Sen. Elizabeth Warren, D-Massachusetts. Ayyadurai is running against the first-term senator as an independent in November.

In what appeared to be a pre-arranged plea agreement, Judge Paul Vrabel agreed to continue both charges without a finding of guilt. The assault and battery charge will be continued for nine months, with a $50-per-month administrative probation fee.

The disorderly conduct charge will be continued for 60 days with a fine of $150. In addition, Solovay was ordered to attend an “approved anger management program.”

Solovay, 74, stood impassively as his lawyer, Great Barrington attorney Louis Oggiani, told Vrabel of his client’s remorse, but insisted that Solovay was “bombarded” with heated rhetoric.

“He was being called a racist,” said Oggiani, who added that Solovay has many friends and relatives who are African-American and that the rabbi who married Solovay and his wife was active in the civil rights movement.

“He realizes he should have just stood across the street,” Oggiani continued. “He went up to engage Dr. Shiva and he ended up pushing the microphone back.”

“He apologizes,” Oggiani said of Solovay. “He should not have let that happen and that’s why he’s here … He’s never been in court before.”

Assistant Berkshire District Attorney Dana Parsons told Vrabel that Ayyadurai and his supporters “were angering people in the Elizabeth Warren crowd” and that Solovay subsequently approached Ayyadurai and “was waving an umbrella at him and took the bullhorn and smashed it into the victim’s face.”

Solovay, an artist and graphic designer with no prior criminal record, was arrested and booked by Great Barrington police after he was tackled and subdued by Ayyadurai supporters on Castle Street.

Ayyadurai, who suffered no visible injuries, had been taunting rally-goers lined up on Castle and Main streets to gain admission to the Mahaiwe Performing Arts Center. Click here to view video of the scuffle taken by an Ayyadurai supporter. The video went viral on right-wing websites such as Breitbart.

Even after the incident in which he claimed to be injured, Ayyadurai continued to shout at Warren and her supporters, calling her a “fake Indian” and attempting to disrupt Warren’s brief speech to the overflow crowd in the gazebo behind Town Hall before the main event.

See video below of Sen. Elizabeth Warren’s interaction with supporters at the gazebo, along with audible attempts by Ayyadurai and his hangers-on to disrupt the speech:

Vrabel warned Solovay that, in accepting the plea, he would be forgoing his right to a trial by judge or jury. Solovay nonetheless threw himself at the mercy of the court.

Ayyadurai was in the room and asked Vrabel if he could make a brief statement. Ayyadurai, 54, gave a five-minute campaign speech and essentially told his life story of fleeing India’s caste system nearly 40 years ago with his family.

“I’m running because I believe that violence is not the answer to solve these issues that we’ve seen over and over,” Ayyadurai said. “Whether it be what happened to me on July 22 or in Charlottesville a year ago, I think we need a civil discourse.”

Solovay appeared relieved as he exited the courtroom. He briefly greeted supporters in the courthouse lobby, headed upstairs to the probation office and was not available for comment.

Solovay worked in the advertising business for nearly 30 years and won awards for his work, according to his online biography.

Editor’s note: After this story was filed, the Edge received a statement from Ayyadurai. Click here to read it.