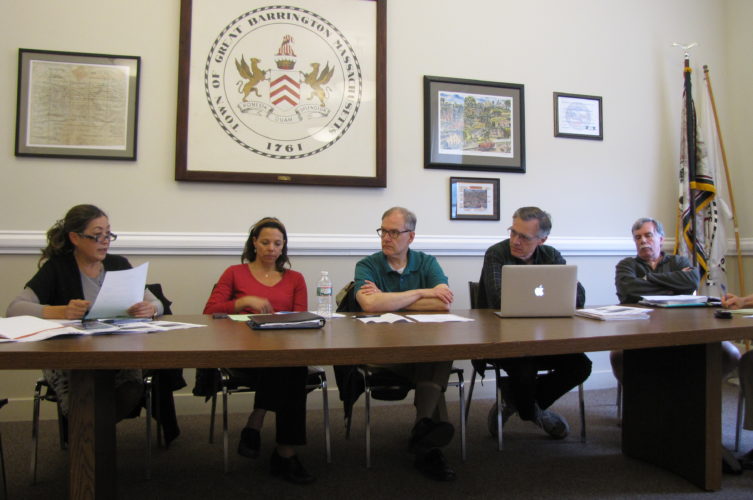 Great Barrington – Convening Thursday (May 22) at high noon, the Finance Committee has demanded greater credibility from School Committee proposals to either renovate the 48-year-old Monument Mountain Regional High School for a scaled-down figure of $51 million, or perform basic repairs to the aging building’s infrastructure for $44 million.

The committee was meeting in advance of a Berkshire Hills Regional School Committee meeting Thursday evening at the Middle School where a decision about which alternative to adopt will be made, with a district-wide vote likely in the fall.

The Finance Committee did not take a formal vote on a recommendation to the regional school committee.

Whatever the alternative, Great Barrington taxpayers would be see the average property tax bill increase by $337.67, the School Committee has estimated.

Only a portion of the repairs would be eligible for state assistance, while the renovation has already been approved for 48 percent reimbursement. The final cost to the district, the School Committee insists, would thus be the same for either option.

“It appears to me that they’ve stacked the numbers to make it look as rebuilding the school or simply repairing it would cost the same,” declared Finance Committee Chairman Sharon Gregory. “They need to make a credible case for the repairs. And they haven’t done that. I’d like to believe them but I can’t.”

She could support the school renovation project, she added, if it could be credibly shown that the cost of basic repairs were comparable to the rebuilding of the MMRHS facilities, thus resulting in a modernized educational environment that would substantially benefit students.

“The figures they gave us include a 5 percent inflation factor for the repair option,” she noted. “I think 3 percent is more reasonable.”

She also argued that before the district – and town voters – underwrite a major upgrade of the high school that the School Committee undertake a serious examination of the size of the school and what the future of education is likely to require of school facilities.

“We need to right size the district, either by adding school districts like Richmond or Farmington River, or reduce the size of the school itself,” she maintained.

Michael Wise, the newest member of the Finance Committee agreed.

“It’s in our interest to have a quality school, but at the same time, we in Great Barrington enroll 48 percent of total enrollment but are paying 55 percent of the cost,” he pointed out. “This is a gap that is unsustainable. It is prudent to step back and to determine who’s in it to pay for it.”

The School Committee meets at 7 p.m. tonight (Thursday, May 22) at the Monument Valley Regional Middle School.