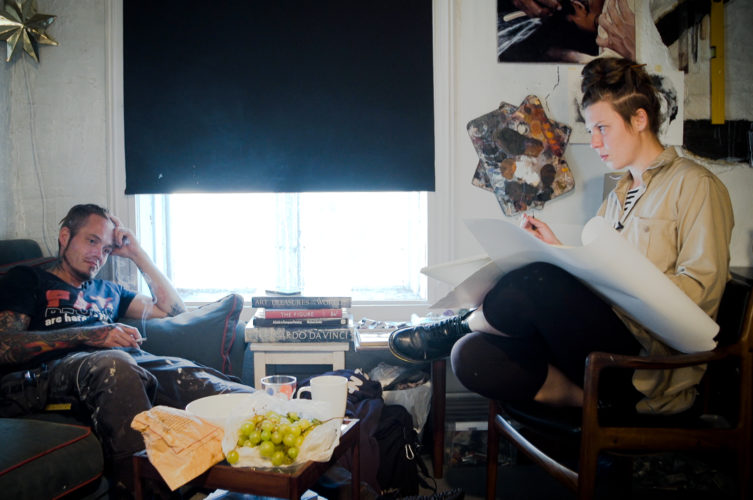 A still from the film 'The Painter and the Thief' by Benjamin Ree. Image courtesy neonrated.com

Given the apocalyptic moment we inhabit, most of the documentaries I have been watching have dealt with political or social subjects. Still, there remain exceptions. “The Painter and the Thief,” directed by the Norwegian Benjamin Ree, is not about the public world, but it’s an intricate, deeply emotional exploration of the unlikely relationship between two wounded characters: a Czech painter, Barbora Kysilkova, who has just moved to Oslo; and a heavily tattooed, muscular junkie and thief, Karl-Bertil Nordland.

It begins with two of Barbora’s gloomy photo-realist paintings stolen from a gallery in broad daylight. The two thieves are quickly caught, but Barbora’s prime interest, oddly, is not in recovering the paintings, but in trying to understand and get to know one of the thieves. She decides to paint him, and he begins to talk easily about his life to her.

Karl-Bertil is the kind of junkie and thief who can recall that he stole the paintings because he thought they were beautiful, but not what he did with them. Their conversations take place over three years, shot by a director who recedes into the background. Karl-Bertil talks of his mother abandoning him, his father never being present, and his evolving from being a good student and holding a variety of jobs (e.g. working with special-needs kids) to being incarcerated in prison for a long period. He is smart, articulate, a talented carpenter, wary of strangers and extremely self-destructive. Barbora’s completed painting of him spontaneously moves him to tears and loud sobs, stunned by what she has created. This striking scene conveys the power of art: the grace that it can bestow on someone whose life has had little of it, and that Karl-Bertil is no ordinary criminal and junkie.

The connection between them deepens, though there are breaks between them, as the director moves back and forth in time and the sequence of events become less clear. Karl-Bertil has been in a car crash, ending up in a coma, and has spent time in prison while the documentary is being shot.

We also learn that Barbora, as a child, was fascinated by death and before coming to Oslo, had a brutal, masochistic relationship with a man in Berlin. It helps to explain why Barbora is clearly fascinated by Karl-Bertil’s self-hating, outlaw character. He also makes for an exciting subject for a painter who gives her life to her work. However, she has a loving, gentle partner, Øystein Stene (a man we don’t really get to know), who is truly disturbed by her penchant to be attracted to destructive people.

One may also feel that Øystein is also threatened by her connection to the thief, which seems carnal, but she informs Øystein: “There was no way I could see the thief in this guy. I just saw purely, like, a naked soul.” And the film somehow convinces us that these two vulnerable people have a genuinely intimate connection where sex is not a part of it.

It’s a moving film, and their complex relationship can’t be reduced to one or two schematic explanations. They are distinctive, fascinating characters, and that’s what holds us throughout the messiness and turmoil that we see on screen. Toward the conclusion, Karl-Bertil seems to have found himself, is studying to be a nurse and is living with a school principal in an arresting wooden house he has built. He sees life as good, but Barbora responds that she can’t ever remember thinking that. One doesn’t know if Karl-Bertil’s new life will last, but we are rooting for him and for Barbora to begin selling her paintings. The film succeeds in making them an integral part of the viewer’s life.

“The Painter and the Thief” is one of the films being given a virtual screening by Great Barrington’s Triplex Cinema, (413) 528-8886.