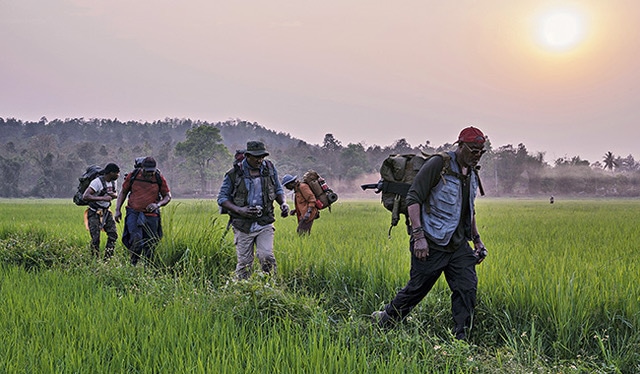 A scene from the film 'Da 5 Bloods' by Spike Lee. Image courtesy lavie.fr

Over the years I taught a great many Spike Lee films and have written about a number of others. Lee has made bad films, but also brilliant ones like “Do the Right Thing” (1989), and very good ones like “Malcolm X” (1992), “Clockers” (1995) and “25th Hour” (2002). He’s directed more than 35 films since 1983, and his work often strikes a political nerve. He can be didactic and inchoate, but he’s always stylistically of interest, and usually ambitious and in tune with the historic moment in the films he makes.

“Da 5 Bloods” (it is now screening on Netflix) has some of the visual panache and energy, and striking musical score (Terence Blanchard is the composer and it features six of Marvin Gaye songs from the early ‘70s) of his best films. It’s also a successful attempt to yoke the black experience as combat soldiers in Vietnam’s horror with the roiling Black Lives Matters protests that have become part of the daily life of American and even some European cities today. He has done it by messily linking a serious, timely political critique to conventional war-movie action, a contrived father and son conflict, an undeveloped romantic link between David and a pretty French woman, and a nonsensical treasure hunt (shades of John Huston’s “Treasure of Sierra Madre.”

The Bloods, as they call themselves, are all veterans of the Vietnam War who plan on a return to Vietnam. Accompanying them is David (Jonathan Majors), the son of the film’s tortured, raging central figure, Paul (Delroy Lindo giving an intense, demanding performance). They fly to a luxury hotel in a transformed Ho Chi Minh City. From there they embark into the jungle where they had fought the Viet Cong close to 50 years ago. They head there to the thundering horns of Wagner’s “Ride of the Valkyries,” a reference to that most ambitious and portentous of Vietnam movies, “Apocalypse Now.” Their plan is to find the loot they had stashed away in the jungle during the War.

The film flashes back and forth to the Vietnam War past when the Bloods were led by their squad leader, Stormin’ Norman (Chadwick Boseman). Stormin’ is a man with a sense of moral rightness that they all look up to and romanticize, a man who has melded them into a fighting unit: a band of brothers who love one another. They may not embrace the war; they are ready to quit combat after hearing of Martin’s Luther King’s death. Still they continue fighting, adhering to Norman’s words, “We won’t let nobody use our rage against us. We control our rage.” What they are fighting for is their own selfhood, not for the U.S. government.

As their quest goes on, they quickly discover the loot and Norman’s remains, followed by a number of violent misadventures. The film’s violence is of little interest, and the ritualistic byplay of insults between the Bloods is watchable for a while until it becomes tedious, though a scene when a landmine left over from the Vietnam War kills one of the Bloods conveys just how much that war has been part of their lives and deaths.

Dominating the narrative is the macho, Trump-supporting, MAGA hat-wearing, paranoid Paul, whose life is a series of sleepless nights in which he talks to Norman. On screen, the profane, uncontrolled Paul rages against having been screwed by life, especially by the toxic war. For a moment he is ready to kill everybody, including his son and his best friend, the balanced equitable Otis (Clarke Peters), to keep the gold. Paul angrily goes off alone, delivering two long monologues in close-up directly to the camera (Lee using his customary Brechtian techniques). One senses it’s not only the trauma of the Vietnam killing fields, but by extension, that of living as a black man in America itself that is the cause of Paul’s rage. There is a scene that follows with the ghost of Norman forgiving Paul for accidentally killing him: one more of the film’s plot contrivances. And even if these plot turns are consciously inserted by Lee to satirize the war film, they don’t quite play that way. They seem awkward and gratuitous.

Lee’s problem is that he sees this muddle of film references, Hollywood war film clichés, and pat conclusion as entertaining the audience. The fact is that the core of his film is his evocation of how black soldiers were used as cannon fodder in Vietnam, which has remained a barely told story. And he evokes that story very movingly.

In Lee’s striking opening montage, he uses video footage of Mohammed Ali refusing to fight in a war against people he has no conflict with — people who had never called him the N-word. The film then cuts a few images later to Bobby Seale and Angela Davis, linking the war to what was happening in a volatile U.S., where protests against the government were a profound part of our lives in the ‘60s and early ‘70s. Lee intermixes photos and newsreel footage of black soldiers fighting a war they may have had mixed emotions about then. Some may have been patriotic; a number were just apolitical, courageous soldiers doing what they saw as their duty; and a few must have been already thoroughly disillusioned with the war, feeling exploited by a country where systemic and overt racism reigned.

The montage underlies a current that goes through the film: lives sacrificed by African Americans for a country that remains blatantly economically unequal and whose police continue to brutalize blacks. (Blacks often made up a disproportionate 25 percent or more of combat units in Vietnam while constituting only 12 percent of the military. Their deaths made up 14.1 percent of the total of American soldiers killed, while they made up 11 percent of the young male population.) The “madness,” cries Otis — the surviving Blood, seen lying on the ground in a high overhead shot — sums up the wanton violence and deaths in the film as well as Lee’s feeling about the nature of black life in the U.S.

The film’s concludes on an optimistic note — some of it pure mainstream Hollywood saccharine, and the rest profoundly stirring — with the final image a card stating that Martin Luther King Jr. was assassinated “in these United States of America.” However, the footage that precedes it provides a message of hope, with King speaking and quoting a Langston Hughes poem, “America never was America to me. And yet I swear this oath — America will be!”

What more can I say? In this time where Black Lives Matter may have real effect on both the nation’s consciousness and its institutional structure, I wish I could say Spike Lee made a great film. But the fact is that “Da 5 Bloods” is a potpourri of politically penetrating and just absurd moments, which is, more often than not, Lee’s signature as an artist.