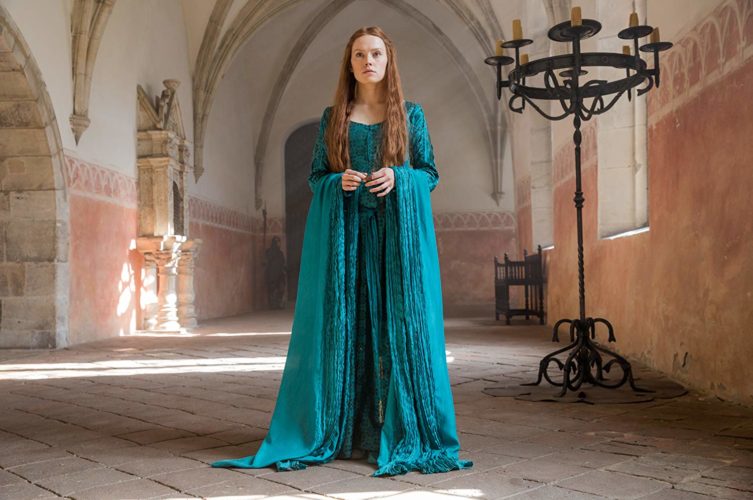 Great Barrington — Shakespearean adaptations are nothing new. The British Library has estimated that there have been more than 400 feature-length film and television versions. You can add to those Claire McCarthy’s “Ophelia,” which showed this past Saturday at the Berkshire International Film Festival.

McCarthy’s audacious film takes the Bard’s iconic tragedy in whole new directions, with elements drawn from centuries of Shakespeare adulation and other aspects reflecting the latest trends in the entertainment industry. Think one part pre-Raphaelite painting; one part plaintive diva-licious anthem; one part irrepressible heroine in the manner of Wonder Woman or Captain Marvel; and one part costume fantasy in the style of “Game of Thrones,” and you will have a sense of what McCarthy and company are up to.

McCarthy’s film actually premiered at Sundance last year. In an interview leading up to that event, the director revealed some of her goals: “Ophelia in the original story is really undone by love. This version gives her much more grit and agency, yet still keeps her within the framework of her time and culture.” The grit and agency revealed in McCarthy’s direction of “Star Wars” standout Daisy Ridley is likely to resonate with younger female fans who have thrilled to the exploits of Katniss Everdeen from the “Hunger Games” series.

Like that trilogy, this feature, too, comes from a young adult novel: Lisa Klein’s 2006 “Ophelia.” The title character’s voiceover at the start highlights the primary ways in which this version differs from Shakespeare’s original: it is a tale told by an empowered young woman who stakes a clear claim to her agency within Denmark’s royal Elsinore Castle and throughout her own narrative.

In addition to this re-orientation toward the title character, the screenplay by Semi Chellas offers some interesting revisions of Shakespeare’s original. Young Ophelia reveals herself to be a plucky young adventurer seeking erudition and literacy at the hands of her sensitive, studious brother Laertes. (You’ll not find any evidence of those attributes in Hamlet.) In the new backstory, Polonius’ daughter is drafted into a handmaiden’s role for Queen Gertrude, played by a compelling Naomi Watts. As it turns out, this royal Dane has a long-lost twin sister who earns her living as a maker of potions, and the concoctions play a key role in the events. Not to give too much away, but Chellas throws in a clandestine marriage and a temporary death a la “Romeo and Juliet.”

In addition to introducing new backstories and parallel plots, Chellas reworks a number of essential scenes between Ophelia and other characters. I can’t say that the new versions hold up particularly well in relation to the originals, though I am certainly not without bias in that regard. Chellas seems to have pulled key words like “honor” and “nunnery” and even throws in a common misquotation of the Bard—“There is method in his madness” for Shakespeare’s original “Though this be madness, yet there is method in’t.” It is as if Chellas worked from a contemporary translation rather than referring to the original text.

Reading between the lines, I wonder whether this decision was made in part to suit a contemporary cinematic cast. Daisy Ridley, for example, has little theatrical background; the closest she has gotten to Shakespeare is a part in “Murder on the Orient Express” by certified Bardophile Kenneth Branagh. (Branagh’s 2018 film “All Is True,” imagining Shakespeare’s life in retirement, is poised for American release this summer.) McCarthy has admitted a long and involved casting process, and Chellas’ simplification of the language would have broadened the range of young female actors who could succeed in the part.

McCarthy reveals an ambitious motivation for her work: “To an audience who is not an expert in Shakespeare, my hope is the story and characters have new currency and invite an audience to experience, or re-experience, this timeless story.” Those who know the original “Hamlet” well, such as your faithful correspondent, will likely be frustrated by this stylistic choice.

Certain aspects of the production were fabulous from start to finish. The visuals were gorgeous, with gothic arches and splendid banquet halls courtesy of various Czech locales—ditto the elegant period costumes and rich score by Steven Price. (The title track featured the haunting refrain “doubt thou the stars are fire,” lifted from Hamlet’s letter to Ophelia.)

“Beautiful visuals,” agreed one BIFF grandee. “Except those wigs—absolutely appalling.” She looked as if she might have some first-hand knowledge of hair-replacement techniques. “Like ‘Game of Thrones’ meets ‘Hamlet,’ right?”

“I’ll have to take your word for it,” muttered her mature companion, scouring her program for the next BIFF offerings. (Two European features and a U.S. documentary were the next films at the Triplex Cinema, as well as the Martin Scorsese tribute event over at the Mahaiwe Performing Arts Center.)

Lights up, a gentleman in my row stretched his arms and legs as he waited for the crowd to depart, dropping their rating sheets with ushers on the way out.  His take was positive but equivocal: “Better than I thought it would be.”

Needless to say, the cast and crew of “Ophelia,” not to mention those who backed the project along the way, are looking for a more resounding response. IFC, which picked up the American distribution rights in February, is hoping for a strong summer showing once “Ophelia” debuts in theaters Friday, June 28. As McCarthy notes: “This film has the potential to also reach younger audiences who are interested in epic tales with mythic, romance and action components. Ophelia’s emotional journey raise[s] questions about morality, gender and self-determinism, and will be of interest to a younger audience.”

There’s the rub for this particular adaptation: It will win in theaters if Claire McCarthy’s direction of Daisy Ridley’s performance can capture a much younger demographic than that on display at BIFF this past weekend. I have to say I like their chances.