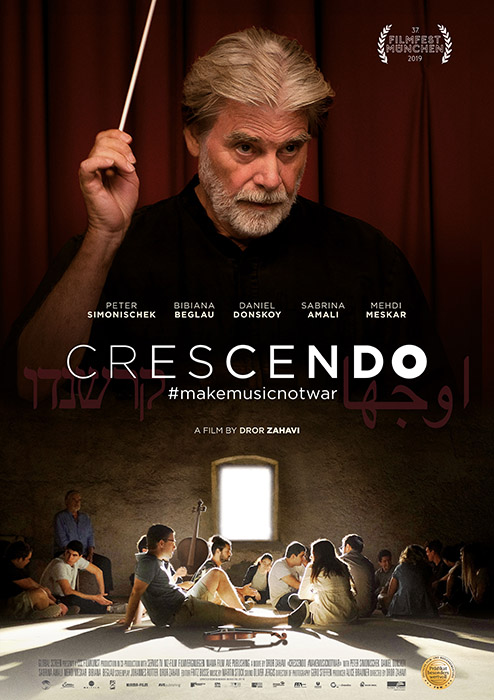 Directed by Dror Zahavi, “Crescendo” is a fictional narrative that draws on real-life orchestras made up of Israeli and Palestinian musicians, such as the West-Eastern Divan Orchestra founded by conductor Daniel Barenboim and the late Palestinian scholar Edward Said, which loosely inspired the film.

In this film, world-renowned German conductor Eduard Sporck (a strong, feelingful performance by Austrian actor Peter Simonischek, who starred in “Toni Erdmann”), accepts the job of creating an Israeli-Palestinian orchestra. It’s a difficult feat given the years of unending hostility and murderous hatred that have festered between West Bank Palestinians and Israelis.

The film too neatly provides Sporck (the “maestro”), a horrific past — his parents were Nazi doctors responsible for atrocities at Buchenwald, who have left him with a profound sense of guilt and disgrace. In addition, he has to live with threats from neo-Nazis. Obviously, his past grants him a special insight into the nature of ethnic conflict, for, as he informs his students, if Jews and Germans can learn to live together and find a common ground, so can they.

Sporck, however, has to deal here with young musicians who, on one side, cannot forget the harsh Israeli usurpation of land, occupation and their ubiquitous checkpoints, and on the other, Palestinian bus bombings and rocket attacks. There is so much intense anger and distrust they have to move the concert from Tel Aviv to South Tyrol.

Only a few of the film’s young musicians are individuated. One of them is Layla (Sabrina Amali), a 24-year-old West Bank violinist who rebels against her mother’s traditional notion of what being a women is supposed to be. Layla also only feels rage toward the Israeli IDF that treats her with utter contempt at the checkpoints. Her shy 17-year-old neighbor, Omar, who plays traditional music on clarinet at local weddings, joins her. The film also provides two Israeli characters that partner with them. The gifted and arrogant Israeli violinist Ron (Daniel Donskoy) resents that Layla is chosen as concertmaster by Sporck, but ultimately, they create a good working relationship. Omar has a brief, sweet Romeo-and-Juliet love affair with pretty, foolish Israeli French horn player Shira (Eyan Pinkovich) that has tragic consequences. None of the interaction between the characters goes beyond the superficial.

The film’s emphasis is not on the character of the musicians, but on Sporck using therapeutic methods so the group can transcend their hostility and establish a workable bond as a chamber orchestra. He gives them exercises where they learn to notice each other, to see that there is an individual beyond their group identity. He also asks them to shout out what’s on their minds about each other. Consequently, we hear babel of voices crying out “terrorist” and “murderer.” But that moment provides a catharsis, and they begin to talk. What Sporck wants them to do is to separate as individuals from their country’s histories, and they are able to make some kind of link.

The strength of this predictable film is that it has honorable intentions without ever engaging in magical thinking. “Crescendo” merely seeks to achieve some human connection between individual Arabs and Jews, even though the conflict between the Palestinians and Israelis has hardened and seems more insoluble with every passing year. Its sense of hope is helped by music that ranges from Dvorak’s Serenade for Winds to Vivaldi’s “The Four Seasons.” I think “Crescendo,” though far from a masterwork, will truly move some audiences.