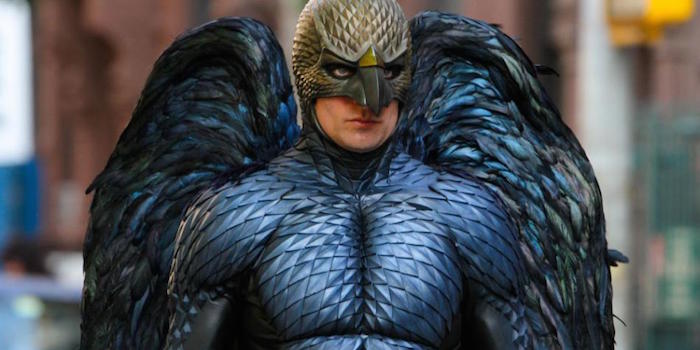 Watching director Alejandro Gonzalez Iñárritu (“Babel” and “21 Grams”) and cinematographer Emanuel Lubezki’s stylistically virtuosic black comedy “Birdman or (The Unexpected Virtue of Ignorance),” one is first struck how visually imaginative it is. The film works well on other levels, but what is most memorable is the illusion of a single shot or take, as the camera pounces and veers following its characters through the labyrinthine backstage of a Broadway theater. The camera moves then onto the stage, into the audience, up on the roof, out onto the teeming streets of Times Square, and upwards into the sky itself.

The film’s narrative centers on Riggan Thomson (Michael Keaton), a movie star who left millions on the table when he declined to repeat his lead role as comic book hero Birdman in a 1990s sequel of the film. That scenario runs parallel to Michael Keaton’s own career, when he turned down $15 million — exiting from the Batman franchise during its first incarnation in the ‘90s. After years of career doldrums, broke and separated from his wife, Riggan seeks to redeem himself by putting on a Broadway version of Raymond Carver’s fine short story “What We Talk About When We Talk About Love.”

The film eschews the traditional linear exploration of a once successful popular blockbuster film actor trying to purge his past success, and renew and rediscover himself as a genuine artist. Instead, the film shifts tones from a satire of the pretensions of the New York theater, to a father-daughter conflict, to a magic realist fable capturing Riggan’s mixture of arrogance, egoism, aspiration, profound insecurity and vulnerability, and his becoming totally untethered in his ambitious attempt to mount the play.

Keaton’s performance richly embodies the anxiety and self-doubt that plague him, though the director’s use of stylistic effects to reinforce his anguish can at moments feel heavy-handed. Riggan is literally haunted by his old Birdman role, that speaks to him in a deep rasp offering the temptation to play at being a destructive, all-powerful figure. Hearing the Birdman voice in his head, he telekinetically spins objects through space or hurls them into walls. He later soars through the air across entire city blocks and blows up cars with a snap of his fingers. Is this madness or just vivid fantasizing, or a satire of super hero films? None of this is explained or delved into in great depth, but the film sustains an exhilarating, dynamic surface throughout.

The performances besides Keaton’s are first rate. Edward Norton as the committed method actor Mike Shiner is perfectly cast as a gifted narcissist, who has penchant for making self-indulgent scenes. It gives Norton the rare recent opportunity for a meaty role where he can play a broken personality, who only comes alive when acting.

Emma Stone’s Sam as Riggan’s recently rehabbed, rebellious, alienated daughter, angry at her absent father, has a more predictable role, though she has a couple of strong scenes where she delivers her put downs of Riggan with panache. Also, Lindsay Duncan has a scene-stealing scene, as a vicious New York Times critic avid to “kill” Riggan’s play with one over-the-top review attacking Hollywood’s commercial encroachment on the temple of New York theater.

But despite these striking performances, the film is dominated by the director’s vision. In an interview Norton said that in this film “Iñárritu is one of these larger than life auteur personalities, and as an actor you have to go with it; you just have to surrender yourself, because it’s his world and you are playing in it.”

Iñárritu has made an off-kilter film, which successfully balances a number of genres and themes. If it sometimes feels too frenzied, and leaves characters and sub-plots hanging, still, it’s a truly imaginative work of art.

“Birdman” opens to general audience this Friday, November 7, at the Triplex Cinema in Great Barrington. Click here for show times and tickets.