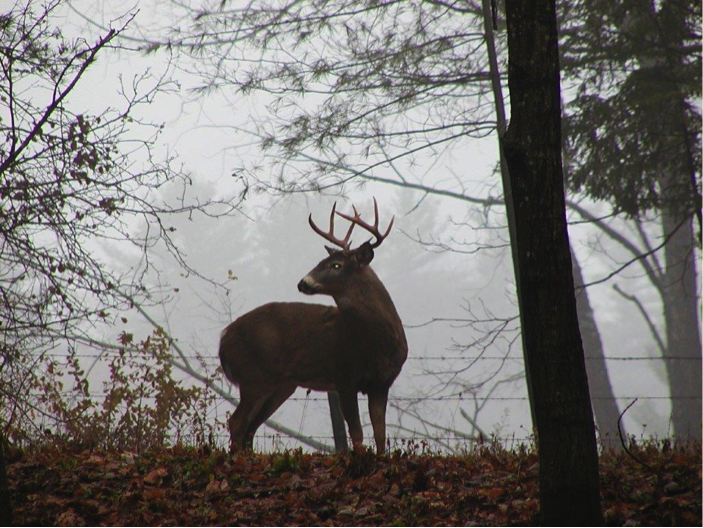 A buck in the fall, before shedding antlers. Photo: Holly Hamilton

Even if you are not a hunter, “deer season” is easily recognizable in the Berkshires by the prevalence of pick-up trucks. They are parked at trailheads and along forested roadsides. They fill motel lots the night before opening day. You might see the hunters themselves, even though they are up and out much earlier than the rest of us, in their tell-tale mix of blaze orange and camouflage. When you see the pick-ups and other signs of deer season, do you think “science?” Or “math?” Probably not. But deer season is based on data. It is informed by deer demographics, population stability, forest health and arithmetic.

Before delving into the science of harvesting deer, here is some vocabulary to help it all make sense:

The vocabulary is not the science per se, but it is the precursor to understanding some ecological and management concepts: the science of deer season. First, let’s examine seasonality. Walt Disney would have us believe that does (mothers) can be hunted while their fawns still depend on them for survival, but that is not the case. Fawns may remain with their mothers during the first year of their lives, but they can survive without their mothers after they are weaned, at about8 weeks of age. Many of them are put to this test when the mother is killed by a vehicle. When hunting begins, at least four months have elapsed since the onset of the birthing season (late May to early July). The young-of-the-year are 5 to 6 months old at the start of shotgun season.

For information on chancing upon a newborn fawn in the early summer, and how to interpret the encounter and why it is important not to jump to conclusions about a missing mother, click here.

At this time of year, questions abound about hunting regulations in Massachusetts: How far from an occupied building does a hunter have to be? At least 500 feet. Does a hunter need written permission from the landowner? Yes and no—it depends on the town. For general, state-wide hunting regulations, click here. For a list of specific prohibitions in Massachusetts, click here. Can I take my dog for a walk in the woods? For a good article on hiking etiquette during deer season by Lauren R. Stevens of the Berkshire Eagle, click here.

When MassWildlife issues a hunting license, it is permitting that hunter to harvest up to two adult male deer (two bucks). Doe permits, on the other hand, are carefully monitored, controlled and adjusted. Because deer are not monogamous, the number of does in a population determines the age structure and stability of that population. In other words, the number of adult females is more demographically significant than the number of adult males. (Did you catch that? Monogamy makes males more demographically significant!)

It is through the number of doe permits that deer populations are managed, for ecological health. When MassWildlife biologists compile harvest data at the end of each season, they examine the numbers by zone (the state is divided into 14 wildlife management zones) and determine the population trend: Is it increasing, decreasing or holding steady? They adjust the number of doe permits accordingly for the following year. Documenting population trends is a statistical and mathematical skill. These biologists know how to correct for variables such as change in hunting effort.

How do the biologists collect data? At deer check stations. The Lee Sportsmen’s Club is one such station in the Berkshires. Every killed deer is reported, either in person or online, and several data points are collected: weight, antler diameter, age (determined by teeth), sex, location of harvest and so on.

Antler diameter is an indicator of health, both the deer’s and the habitat’s. A deer that has a relatively thick antler is a deer that has dedicated a lot of energy to antler growth, and that is indicative of a habitat rich in food sources. Age data is used to examine the age structure of a population. It is a way to check for evenness—versus a disproportionate number of any single age class—and to check for signs of population instability. Weight is like antler diameter in conveying the overall condition of the animal, the population and the habitat: The data points are similar to measurements taken when we go for a physical, except that, in the case of the deer, it is post mortem.

Deer biologists also look to the trees. Overpopulation of deer can be detected with forest surveys. Over-browsing by too many deer is evident when the mixture of mature trees in a native forest does not match that of the saplings on the forest floor. In other words, if a forest consisting of tall, mature maple, beech, oak and birch trees is devoid of those species at the sapling level, the density of deer may be too high. This is risky for the forest as well as for the deer. A less diverse forest (i.e. dominated by white pine) takes the place of the once-diverse mixture of tree species. Lower diversity makes a forest—or any ecosystem—less resilient in the face of storms, droughts, fires, floods and other natural disturbances.

There is a lot of literature on over-browsing by deer, and this is an issue that keeps MassWildlife busy. Numerous towns inside the I-495 corridor have an overpopulation of deer, resulting in decreased forest diversity, frequent deer-vehicle collisions and contentious battles about where to permit hunting. To learn more about forest ecology and the impacts of too many deer, click here.

Speaking of science and truth, let’s talk about climate change and its connection to the locavore movement. More and more organizations are issuing reports and warnings about the large carbon footprint associated with beef consumption. Most recently, the World Resources Institute presented its findings at the UN Climate Summit in Katowice, Poland. This report and others urge us to cut back on or eliminate red meat from our diets, but it is important to remember that not all red meat is farmed, processed and shipped.

Taking a deer is a carbon-neutral way of eating red meat, and MassWildlife is seeing an uptick in the number of hunters whose primary motivation is knowing where their food is coming from: eating locally. After all, hunters rank at the top with birdwatchers for their knowledge of the natural world and their dedication to land conservation.