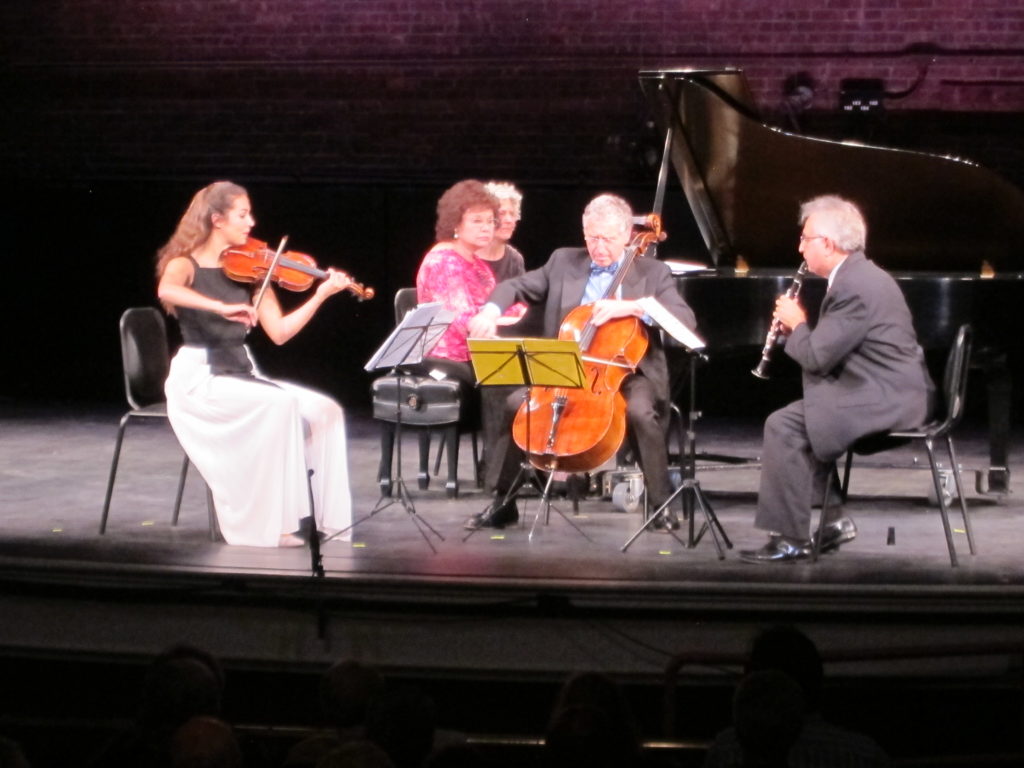 REVIEW: ‘Fiddler Off the Roof,’ celebrating the range of Jewish music with Close Encounters With Music

Great Barrington – On Sunday, April 17,  Close Encounters With Music (CEWM) presented violinist Sarah McElravy, clarinetist Paul Green, pianist Michelle Levin, and cellist Yehuda Hanani in “Fiddler Off the Roof,” a wide-ranging exploration of Jewish music. This program, performed at the Mahaiwe Center for the Performing Arts, the latest in the Close Encounters concert series, was the brainchild of artistic director, Yehuda Hanani, the go-to guy when it comes to asking the question, “What is Jewish music?” 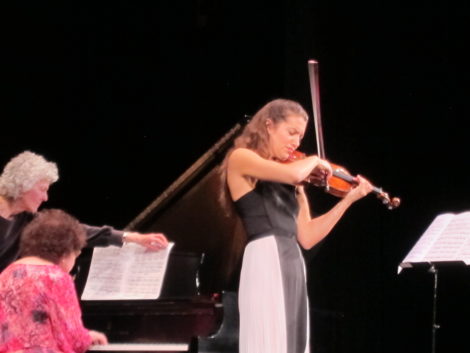 In his pre-concert lecture, Mr. Hanani proposed a definition of Jewish music that encompasses everything from ancient prayer chants and cantorial songs to pop ditties by George Gershwin and Leonard Bernstein. As helpful as Hanani’s oral instructions were, however, the most important insights about Jewish music came directly from each of the dozen selections he programmed for this concert.

The show opened with two excerpts from David Schiff’s opera “Gimpel the Fool.” Schiff says his music reflects “the basic eclecticism of the Jewish musical inheritance,” and he must be right. His compositions employ traditional Jewish melodic modes, even while touches of Stravinsky, Mahler, and others place it unmistakably within the 20th century.

Yes, Schiff’s music does sound relatively “modern,” and yet it is highly accessible, because it departs from traditional tonality just enough to make it unpredictable and enthralling while maintaining enough tonal stability to keep it from going off the rails harmonically. All members of the ensemble were comfortable with this piece, and they thoroughly enjoyed performing it. Juilliard-trained clarinetist Paul Green’s exuberant playing, in particular, was spot-on and as spirited — in a Klezmery way — as one could possibly require. Not all classically-trained clarinetists are capable of performing Klezmer-inflected music convincingly, but Green has unquestionably mastered the style. 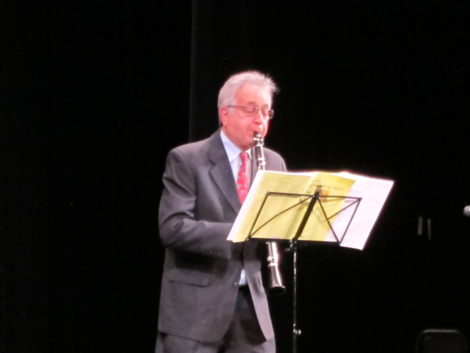 The brightest highlight of Sunday’s CEWM concert was the world premier of Paul Schoenfield’s  “ZEMER,” a piece based on Rabbi Max Roth’s melody. Some in the audience had driven long distances to hear this single piece, and their reward was great. Like Schiff, Schoenfield draws from a vast range of traditions to create music that’s melodic, playful, and beautiful but also gently challenging. Critic Raymond Tuttle once described Schoenfield’s music as “wild silliness in the face of existential dread,” and his words are perfectly apt: ZEMER’s frolicsome passages do flirt with whimsy at times, but they stray only a little from the solemn undercurrent running throughout the piece. Schoenfield’s music elicited louder applause and more enthusiastic shouts of approval on Sunday than any other selection on the program. Clearly, the crowd loved “ZEMER,” and so did the rabbi, who stood up to acknowledge applause from the audience.

If not for Paul Schoenfield’s attention-getting premier, the headline act on Sunday afternoon would have been Felix Mendelssohn. After hearing several shorter pieces from Bernstein, Mahler, Ravel, Gershwin, and others (with the vocal numbers executed beautifully by tenor Alex Richardson), the audience was well primed to enjoy Mendelssohn’s thrilling “Piano Trio in D Minor, Op. 49.” This piece is enormously popular with concert audiences everywhere. It’s also exceedingly difficult to play, even for accomplished musicians. The ensemble had obviously rehearsed this piece well, partly, one might surmise, because it is so challenging, but also perhaps because musicians of this caliber have so much fun playing it. In any case, the players enjoyed the piece at least as much as the audience. 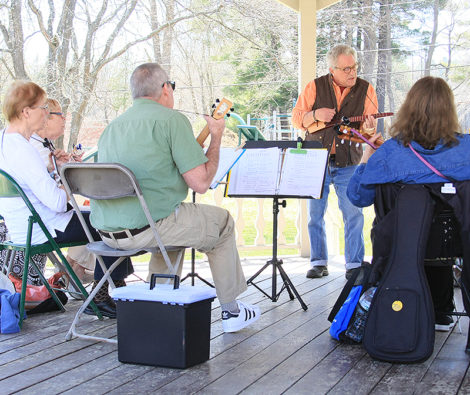 Prior to the CEWM concert, arriving Mahaiwe patrons were in for another treat, had they strolled by the park in back of Town Hall on their way to the theatre. They heard the dreamy sounds of the Sunday Strummers, a ukulele and vocal ensemble made up of Berkshire Ukulele Band members Paul Edelman, Bob Feuer, Faye Windram, Patrice Farrell, Peggy Richard, Ken Otsuka, Sherry Steiner, Jim Tyer, Jean Drees, and Jackie Shepardson. From a gazebo opposite the Mahaiwe, these musicians cast a spell over passers by with some of the loveliest music one could hope to hear on a balmy Sunday afternoon. In particular, their treatment of the Everly Brothers’ “All I Have to Do Is Dream” was magically sublime.

— Emma Goldman
Read next: Could a Farmers’ Market prompt a relocation?