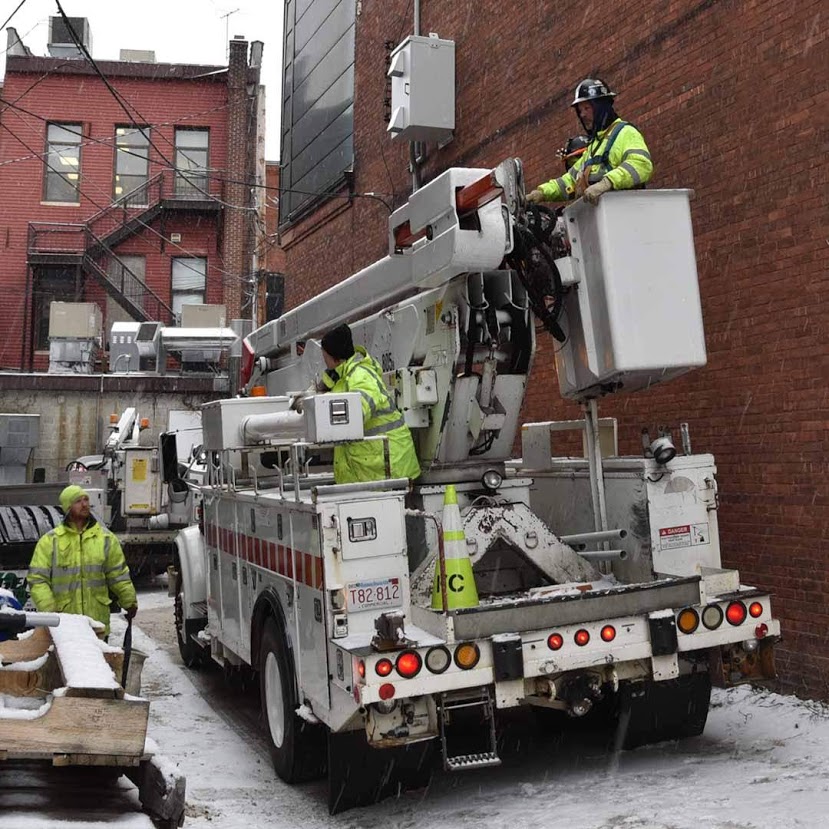 Editor’s note: This story has been revised to include better information about available Charter-Spectrum broadband services in Great Barrington.

Great Barrington — The quest for real broadband in downtown Great Barrington is finally moving ahead. Fiber Connect of the Berkshires, a regional high-speed internet service provider, is installing equipment to feed businesses and apartments with the goal of lighting up new customers after the new year.

Adam Chait, who heads the Monterey-based fiber provider, told The Edge his crews have been busy this week installing what’s known as a “head-end,” or equipment that feeds service to an area. The head-end will be behind the Mahaiwe Performing Arts Center on Castle Street.

“We’re in the middle of head-end construction,” Chait said in an interview. “There has been great interest in the service, so this is good news.”

In February, Selectman Ed Abrahams and Tim Newman of Wired West announced to the selectboard an agreement with Fiber Connect to wire the core of downtown with fiber-optic lines that will bring standard download speeds of up to 1 gigabit per second.

Charter-Spectrum, the unpopular cable television behemoth that serves most of Berkshire County, offers an entry level download speed in Great Barrington of 100mbs (about one-tenth of Fiber Connect’s). Faster download speeds are available from Charter, with an “Ultra Tier” of 400mps. Spectrum Internet Gig and Spectrum Business Internet Gig, which are roughly the same speed as Fiber Connect, are available for residential and business customers in the Berkshires.

In August 2017 Newman and Abrahams made a presentation to the selectboard that included a 10-page document listing various options and examples of other towns that have successfully brought fiber into their communities and at what prices.

The service has been long awaited, especially in downtown Great Barrington, which houses many businesses that crave faster speeds.

Chait said Fiber Connect is in the process of bringing power to the head-end unit and splicing various cables that will feed into it. He expects the unit to be fully operational by the end of the month. Then, after the new year, he will start wiring some downtown buildings near the head-end, but only the ones whose landlords have granted him an easement to do the wiring.

The town said in a news release earlier this year that the company “will pay for the costs of maintaining the network and will work directly with building owners in the coming weeks to obtain easements to run the fiber-optic cable between buildings in those areas.” Not only that, but the installation of the fiber-optic cable will come at no cost to landlords or the town.

Chait figures the south side of Railroad Street will be lit up first since it is closest to the head-end and he has secured easements from many of the building owners. Some other building owners, Chait said, have been less responsive to his inquiries.

In an interview, Abrahams wondered aloud why some landlords would be less-than-responsive since the wiring would cost them nothing and fiber connectivity would clearly make their buildings more valuable.

“The issue of vacancies is not much of a problem,” Abrahams surmised. “The Tom’s Toys building has a lot of businesses that could use fiber, but his building is completely full.”

Some downtown buildings, including the recently renovated 47 Railroad Street, have already contracted out to private fiber providers. Ian Rasch and Sam Nickerson, the principals of Framework, the developer, have contracted with Crocker Communications to bring a fiber line to serve their ground-floor retail spaces and 12 rental apartments. Another new downtown development, Powerhouse Square, has also reportedly contracted with a different fiber provider.

The precise territory to be wired is not set in stone, but it will likely be confined to both sides of Main Street from Castle and Bridge streets to the Berkshire Bank and Lee Bank buildings. The wiring of Railroad Street will likely be coordinated with the new pavement and sidewalks it will be receiving in the spring, Abrahams said.

Some of the buildings will see fiber enter from the rear. Others will have access to a small underground tunnel. Newman and Abrahams discovered that, as a result of the $6 million Main Street reconstruction project of 2014–16, there was supposed to be a utility box at the corner of Railroad and Main streets. Workers removed it “at the last minute,” Abrahams explained, but the town-owned empty conduit that runs under the street remains and can still be used.

Abrahams and others have said the availability for fiber is critical to the economic development of the downtown core.

“The issue all along for Great Barrington is that cable is good enough for a lot of people,” Abrahams said. “We have Charter and my teenage daughter and I can both stream Netflix the same time. But for businesses, there is a huge difference.”

Indeed, several so-called second-floor businesses in downtown Great Barrington, including Asa Steady Hardcastle’s Tonic 5, have told The Edge that slow upload speeds in particular are interfering with their ability to video conference with clients and move large files.

Indeed, The Edge itself, located in the Ware Block building above the Jane Iredale cosmetics store, has found Charter to be satisfactory for everyday use. But when this reporter returns to the office to upload an hour of high-definition video to YouTube, it can take hours.

As for the difficulty of getting landlords’ attention to respond to easement requests, Abrahams said, “If tenants would like fiber in their building, they should contact their landlord.”

“Let the tenants scream at them and maybe [the landlords] will talk to us,” Chait said. “We have a fair number of absentee landlords. Some feel if it’s broke, don’t fix it.”

Chait said he is convinced that broadband “makes the building more attractive” to tenants and buyers.

“We’ve seen it in Egremont,” Chait added. “Commercial spaces or houses that were unoccupied are now filled or have been bought.”

Fiber Connect has already installed head-ends and wired large portions of Monterey and Egremont, two very small rural towns that are not served by cable and so have a high “take rate” among those who are offered the service. Click here to see which portions of the two towns are “lit up” and which are in process.

Fiber Connect rates will range from $99 per month for standard residential fiber-optic net-neutral internet and $149 per month for business internet. Each requires a three-year commitment. Residential and business customers would also have the option to purchase custom coverage with download speeds up to 10 gigs per second.