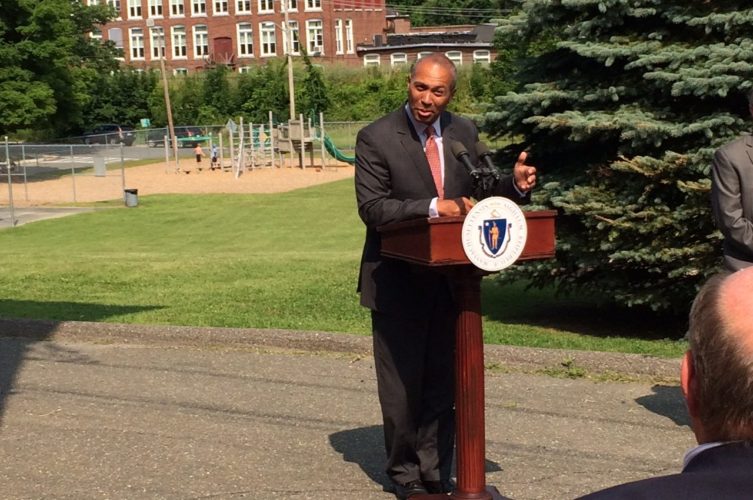 At the Housatonic Elementary School Gov. Deval Patrick announced $803,000 in federal grants for Great Barrington and Sheffield. In the background it the Bubriski playground and the Country Curtains mill.

Housatonic —The sun shone on the Commonwealth Friday. It was raining federal money.

In an afternoon press conference behind the old Housatonic Elementary School, Gov. Deval Patrick announced $27.5 million in federal Community Development Block Grants (CDBG) for 54 cities and towns across the Commonwealth, including $803,100 for a combined application from Great Barrington and Sheffield. The text of the announcement is here.

The CDBG program was developed for communities with populations of less than 50,000, and is administered by the U.S. Department of Housing and Urban Development (HUD). $900,000 for a single community is the maximum grant amount allowed.

Governor Patrick made reference to his administration’s commitment to three things: “education, innovation and infrastructure,” and he applauded a “congressional delegation that fights for these programs.”

Indeed, Congressman Richard Neal was on hand, and cited his 16 years in local government that predated his Washington career, to demonstrate his understanding and sympathy of the challenges faced by small town government. The CDBG, he said, gives communities flexibility, so that “you can determine what your priorities are.”

One of those priorities lies in Housatonic, where a stormwater conduit on Front Street and under Monument Mills is “falling apart,” and needs an estimated $76,000 fix, according to Great Barrington Town Planner, Chris Rembold, who worked tirelessly with other Great Barrington and Sheffield officials to apply for the CDBG funds, a highly competitive process. Rembold said that the water emptying into the mills was “not good,” adding that “the Town wanted to address it to avoid a redevelopment obstacle,” since Housatonic, a village within Great Barrington, looks forward to a revitalization to transform its old industrial infrastructure.

In Great Barrington and Sheffield, grants for 15 residential units, averaging around $30,000 apiece, will be made to help “low and moderate income homeowners” get their homes into compliance and make them safer. Most of the funds will go into Housatonic, since, said Rembold, the area had been given a technical designation as “slum or blight” by the Massachusetts Department of Housing and Community. In Sheffield, some of the funds will also be used to make Town Hall handicap accessible.

In the spirit of the CDBG program, this sort of assistance, according to state officials, will trickle out to reinforce job creation.

Local banks have committed to help with the program, said Rembold, by setting aside $400,000 for housing rehabilitation loans to those who qualify.

“This [grant money] will provide direct assistance,” said Rembold, “to homeowners who need to put a new roof on, get a boiler upgrade, or energy efficient windows.” Residents in a “house rich, cash poor” situation will benefit, he added, because “the federal government says they want to help low and moderate income homeowners.”

At the press conference, a highly pleased State Rep. William P. “Smitty” Pignatelli (D-Lenox) celebrated this federal attitude. “Keep bringing money here; this is where it belongs,” he said.

State Senator Benjamin Downing recalled the days of his youth, shooting hoops in the Housiedome – the old school gym – just around the corner. He marveled that he was now here, speaking alongside the governor. Downing, too, praised this gift from within the unpredictable beltway. “Value sometimes goes unnoticed in Washington,” he said.

Great Barrington Selectboard member Sean Stanton referred to “many, many long evenings,” of master planning for the Town’s “award-winning Master Plan,” and said that that this CDBG “builds on nearly $1 million in recent and planned town spending in the immediate area.” It was the master planning that led to a “community development strategy, on which this grant application was based.”

Roughly $150,000 of the funding will be used to administrate the grants, which, said Rembold, are “pure federal funding. No matching. There’s no other shoe to drop with this money.” 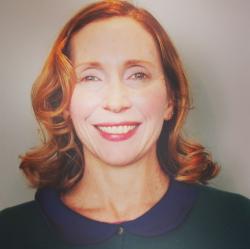 A former reporter and Managing Editor for The Edge, Heather Bellow is now an investigative reporter for The Berkshire Eagle. She lives in Great Barrington.