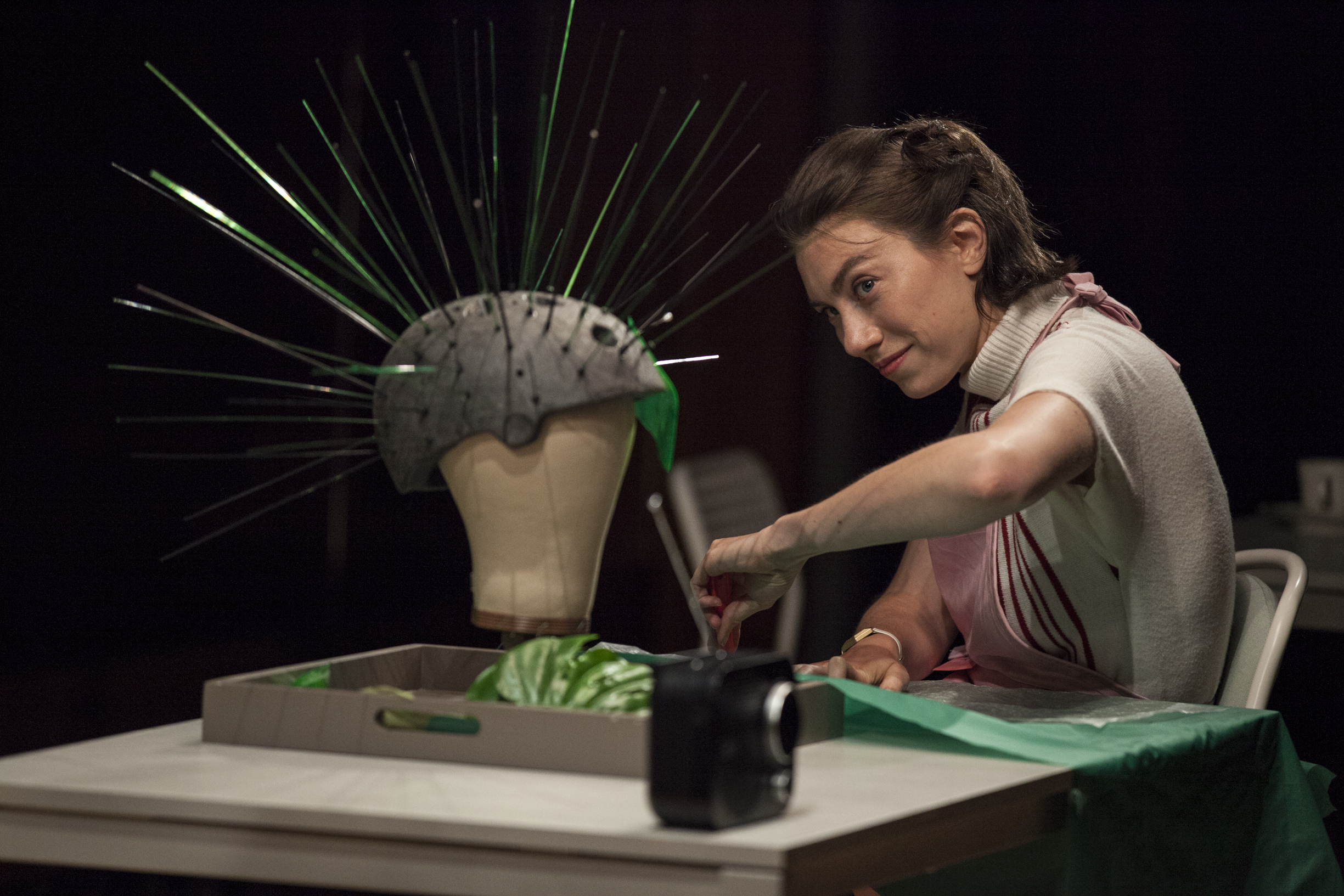 Caryl Churchill’s FAR AWAY is often described as “dystopian” – think HANDMAID’S TALE or the 1984 Apple MacIntosh commercial that began the personal computer revolution. It can be a frightening place where everything is controlled by some totalitarian state. In dystopia, we spend most of our time looking over our shoulders making sure “they” are not about to consume us.

FAR AWAY does not bother to postulate how we got to that place. We are not presented with reasons why our characters make fanciful hats that adorn the condemned in their state-ordered “marches de la mort.” We are not consulted as the world sinks into a condition, not of “us versus them,” but of everything versus everything else. It is a world where the announcement that “The elephants went over to the Dutch” is as logical as describing the enemy as “Spanish, computer programmers and dogs.” It is, simply enough, the world in which Harper, Todd and Joan live … and try, desperately, to survive.

This is not a frothy summer musical. FAR AWAY is a play that envelopes you from the first barefoot steps of a young Joan as she approaches her aunt, Harper, with a gentle but relentless series of questions that ultimately reveal why, in the middle of the night, her uncle has been hiding refugees in the shed until they can be whisked away. Harper attempts to parry her inquisitive niece’s inquiries until she can no longer hide the truth and, at best, assure the child that things will be all right and “your soul will expand right into the sky.”

Now to the performance – the compilation of a stark, yet stunning set that features a mirror inserting the audience into every move, every word is more than matched by brilliant performances by the four named stars of the play. Director Morgan Green, in her second outing at Sharon Playhouse this season, has created a seamless gem that repays the audience confidence with every move, every line.

The first act of FAR AWAY is entirely presented as a dialog between Young Joan, rendered by young Madelynn Peterson whose debut performance is eloquent, innocent, charming and compelling as she carries off every adult’s nightmare of being confronted by an innocent whose response to every hastily conceived answer is another question … “Why?”

Her aunt, Harper, is mystically, elegantly created by Mia Katigbak who is aware, at every turn of the play, just how critical these moments are. She understands. She does not panic. She is at the still center of the chaos around her. We need her. She is our guide and our sentry.

In act two, we meet Todd, a creator of hats who has, over the years, presented 300 different, fanciful creations to the condemned who parade before unseen judges as they move to their demise. The victims have already been judged. During the parade, the hats are judged, and Todd has had three of his creations selected “Best in Show.” Gabriel Levey’s performance dances between flirtatious, prideful and growing paranoia with an ease that makes a complex character charming – a person we care for and fear for at the same time.

And, there is the truly stunning performance of Madeline Wise as Joan, now grown to womanhood. Does her character find the irony in worrying about the careful design and delivery of her hats that fall with their wearers into the consuming flames? If so, she masks it with earnest innocence and the nuance of fully immersed character that defies disbelief. Madeline is Joan. There are no seams or lines of demarcation.

The production, set on a sparsely set stage (four tables, four chairs, four small radios … and that massive mirror) moves the audience into the middle of the play. Morgan Green’s uncanny ability to weave the audience in and out of her productions makes this experience totally engrossing.

A thundering tribute to her skillful direction and Artistic Director Johnson Henshaw’s remarkable foresight in bringing Green to Sharon is the parting view of the audience. The play has ended for the evening. The actors have taken a truly well deserved bow and left the stage. The audience, on their feet, seems to be paralyzed. They do not move. They stand and talk, and question, and posit theories and expect answers. They eventually, reluctantly leave the space, repeating a chorus of “I’ve got to see this play again. Really! This was incredible!”

In order to see FAR AWAY a second time, it is suggested that you see it for the first time. The short run of this explosively imaginative piece ends on July 23. It is being presented in the Bok Gallery Theater at Sharon Playhouse, Route 343, Sharon, Conn. Box Office 860-364-7469, ext. 20