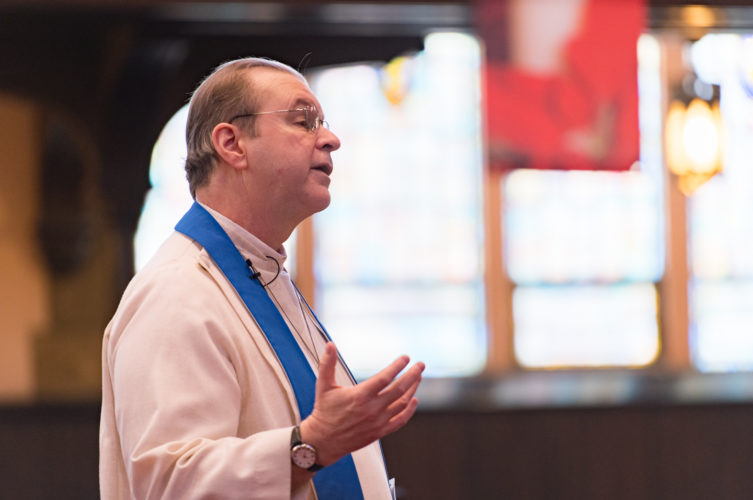 The pandemic is a type of trauma; our way of life has been altered. Something has been lost. There’s grief and sorrow and fear. As we adjust to a new normal and emerge outward, how can we transform the despair and panic instead of transmitting it to others? As author M. Scott Peck said: In every situation you’re either learning or teaching. What can we learn here? How can we become better human beings, instead of the other way around? Faith leaders weigh in on how to move forward.

The country is in “fight or flight,” it’s fear mode, said the Rev. Erik Karas of Christ Trinity Church in Sheffield. When you’re living in fear, you don’t have access to the more evolved parts of your brain. To help get out of fear, “ask questions.” Brain science shows that asking a question opens up the neural pathways to your executive functions, which include reducing impulsiveness and developing perspective, explained Karas. He pointed out that simply asking: “How’s what I’m doing working out for me?” or “Why am I eating this 45thcookie?” shifts your thinking to a higher octave. Additionally, if you’re in a conflict with someone, asking that person a question elevates their thinking.

Karas believes “God wants us — and all of creation — to have an abundant life.” Working toward that vision is always about “making decisions that help your neighbor.” “We’re being offered a chance to grow,” Karas said. “It’s an opportunity to repair the brokenness that has been exposed.”

Ask: “How can I be of greater service?” said the Rev. Monshin Paul Naamon, abbot of Tendai Buddhist Institute in East Chatham, New York. Service to others enlarges who you are. “If you do something for someone else without an expectation of a reward, you expand as a person,” Naamon said. “When you only think about yourself, you’re going to suffer more.”

The idea that “life is suffering” is a core Buddhist principle. “Being alive means that you’ll experience suffering,” Naamon noted. Relinquish your attachment to your ideas of how you think things should be. When you “fight” what is or try to force an outcome, you create more suffering.

Everything is impermanent, Naamon stressed. Acknowledge what you can control and what you can’t – and let go.

“At some point, you have to admit you’re not the writer of the script,” said Rev. Ralph Howe of First United Methodist Church in Pittsfield. “When you finally accept this, you make room to receive something larger,” Howe said. “The Divine is in every life,” he emphasized. “As you pay attention, you see more and more of it. Divine intervention might come to you in a momentary flash of insight: ‘I can do something different in this situation.’”

Howe believes abuse of the planet and lack of reverence for humanity were contributing factors to the virus. Instead of looking outward “to consume things and people,” look inward to your deeper self. Connecting with something larger is how you become a fully alive human being, he stressed.

“Every few minutes say, “thank you”: ‘Thank you for this glass of water,’… “Thank you that my arm doesn’t hurt right now,”… “Thank you for this food,” Howe urged. This changes the dynamic from “not enough” to having more and more. It also develops the pathways in your brain to higher level thinking — similar to the effect of asking questions, as Rev. Erik Karas mentioned.

In a state of panic, you don’t realize you have choices. The key, Howe said, is to carve out time every day for silence and stillness; this quiets the mind so inner wisdom and the transcendent can enter.

According to Rabbi Barbara Cohen of Congregation Ahavath Sholom in Great Barrington, this is a time of intense self-examination. “Ask yourself: ‘What am I doing, even in the slightest way, to contribute to the negativity and trauma?’” she said. How you respond is a choice. With every action, you’re either adding to the negativity or the positivity. “At every moment, you’re exercising your free will, and how you exercise that free will is how your life plays out.”

“We’re at a potential crossroads,” Cohen said of the situation. “It can go one way or the other.” And how the pandemic continues to unfold is largely up to us, and the choices we make.