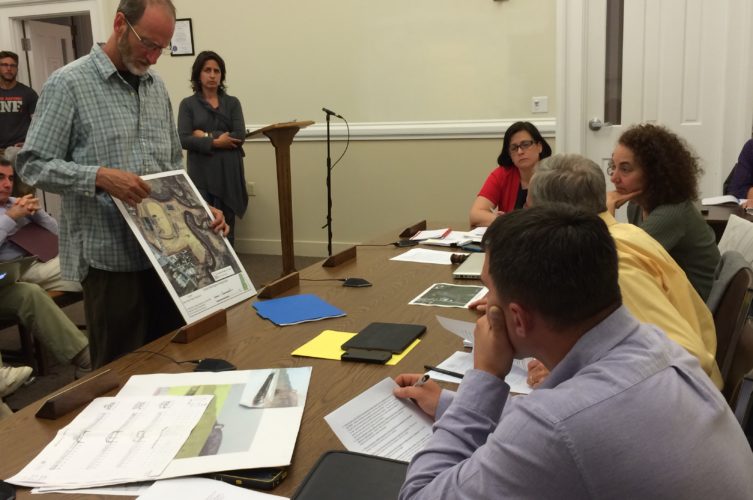 Great Barrington – For a project that seemingly has the good will of the community behind it, the revival of the Great Barrington Fairgrounds has proven remarkably adept at confounding and frustrating town officials who would otherwise be inclined to support it.

Since purchasing the 57-acre, derelict property on South Main Street along the Housatonic River for $800,000 last year with the goal of transforming the fairgrounds into a sustainable agriculture and recreation center, with educational programs focused on environmental preservation, Bart and Janet Elsbach of Sheffield have mustered an eager coalition of volunteers to clean up and clear out the overgrown race track, its grandstand and outbuildings, and have established a nonprofit organizational structure.

And no doubt about it, the property looks better than it has in decades.

This season, the Great Barrington Farmers Market has relocated to the fairgrounds with great success, attracting more customers and vendors than it was able to accommodate at its former downtown site at the railroad station.

“There are two to three times the number of people visiting the farmers market now than in the past, and the reason for it is that the community is asking town officials to make this happen,” farmers market director Howard Lefenfeld told the Selectboard this week.

But, perhaps because of the hybrid nature of the enterprise – a nonprofit, community redevelopment project, represented by the Elsbachs rather than an attorney or consultant – or perhaps because of the challenges of navigating regulatory requirements for property located within a floodplain, the Great Barrington Fair Ground (GBFG), as the project is formally called, has run afoul of the town’s permitting procedures.

First, the Elsbachs got into a wrangle with the Conservation Commission over which part of the property they could situate a dog park and which part was considered a wetlands. That matter is still unresolved.

Then, just this week, the Elsbachs came before the Selectboard with a special permit application to make a series of improvements, but the application lacked the required certification by a qualified engineer that the alterations to the property would comply with floodplain regulations.

The permits to begin improvements are necessary, Bart Elsbach explained, in order to pursue the fundraising that will sustain the project financially.

“We have 10 proposed components to the fairgrounds redevelopment, but the fundraising is contingent upon the permitting that will allow us to proceed,” he argued. “The funders need the permits in place. And with the Selectboard approval of this special permit, we can go to Building Inspector Ed May, for instance, for our repair of the cowshed for the farmers market.”

He also pointed out that solar array was intended to be a “financial engine” for the fairgrounds renovation, but that it needed to be approved by July.

For more than two hours Monday evening, the Select Board struggled to accommodate the applicants, by dividing the application into two sections, a compromise suggested by Town Manager Jennifer Tabakin.

“There are 10 projects we could divide into two phases,” she said. “In the first, they do the cowshed, the chainlink fence for the dog park, the community garden in raised beds – things that are seasonal and temporary in nature. In the second phase, which involves more floodplain issues, they could consider the office building, the grandstand and the solar array. You could approve Phase I conditional on the receipt of an engineering report.”

But Selectboard Chair Deborah Phillips noted that “there’s not enough information to approve a special permit for Phase II.”

And Tabakin pointed out that the solar array, for example, would need an engineer’s certification that it could withstand flooding, as required by law.

“We are not professional developers,” commented Janet Elsbach. “We’re the leading edge of a community movement to get this done and to make this happen at the fairgrounds.”

In the end, the Selectboard endorsed only the GBFG’s request to be designated a “community center,” the category within the town bylaws that most nearly describe the fairgrounds redevelopment.

The Elsbachs will return for another hearing on their special permit application.

“Our goal is to make this happen,” assured Selectboard Chair Deborah Phillips.