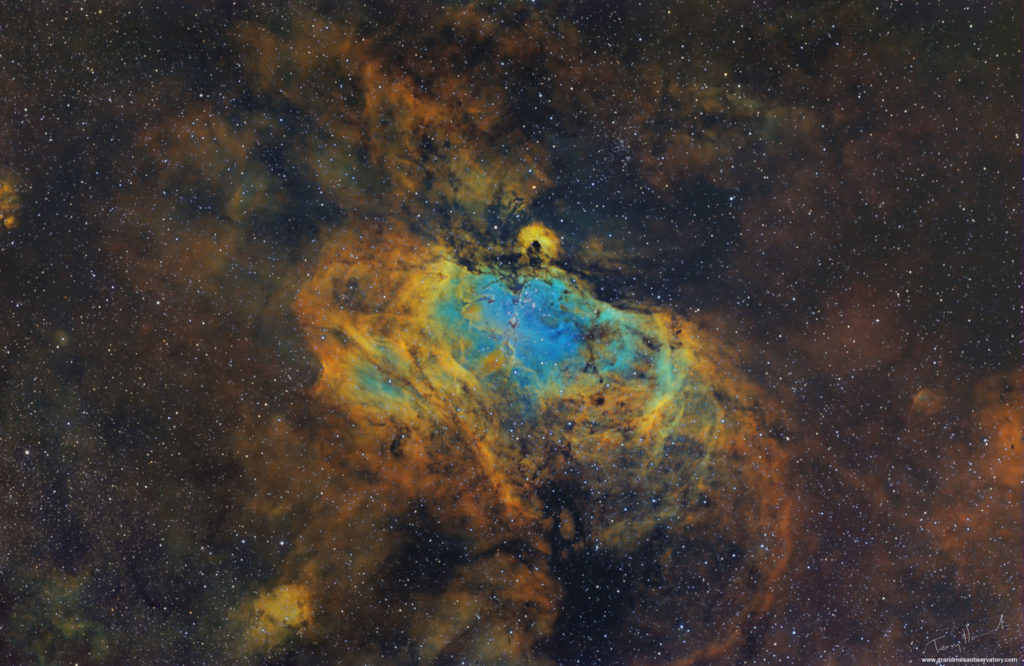 ‘Fly Like An Eagle.’ Nebula imaged by Astrophotographer Terry Hancock, Down Under Observatory and Grand Mesa Observatory. Purdy Mesa, Colorado. All rights reserved.

EYES TO THE SKY: Worldview: Origin of our Sun, solar system, ourselves

Mount Washington — During the dark time of year here in the Northeast, our visual environment is more of starry skies than earthly phenomena. In this “Eyes to the Sky,” as in a post a few weeks ago, I offer you the opportunity to reflect on the natural world as revealed to us by astronomers and astrophotographers. I have the pleasure of presenting the words and images of astrophotographer Terry Hancock, the creator of “Fly Like an Eagle,” the nebula image featured above.

The following description of nebulae is from the video preview of “The Armchair Astronomer: Volume I – Nebulae” by Brian Ventrudo and Terry Hancock.

“….nebulae (are) massive clouds of cosmic gas and dust set aglow by the borrowed light of stars… The color, intricate structure, and overwhelming beauty of a nebula become evident only in images taken through a telescope with a sensitive camera that, unlike the human eye, can collect light over many minutes and hours. … While they seem like natural works of abstract art, nebulae … teach us about the composition and lifecycles of the hundreds of billions of stars in our galaxy. … Our Sun and the planets and most of the objects in our solar system, for example, as well as the atoms in your own body were once embedded in a glowing reddish-pink nebula that faded more than 5 billion years ago.”

On another tack, Terry continues, “The field of astronomy has always held a power over the imagination that is unique among scientific disciplines, but modern technology has allowed us to explore the wonders of the night sky like never before and for the first time in history this incredible hobby is genuinely accessible. On both the amateur and professional levels there is now access to equipment that represents a cost and quality unlike anything we have ever seen, but even for the most well-equipped astronomer there is no substitute for clear, dark skies.”

Grand Mesa Observatory in Colorado, under the direction of Terry Hancock, offers on-site and remote access to unpolluted skies. Terry reaches students all over the world through downunderobservatory.com, an online astrophotography tutorial service with instruction on equipment and image acquisition and processing. Several of Terry’s students have earned a place in NASA’s Astronomy Picture of the Day series http://apod.nasa.gov/apod/.

Terry’s astrophotos have been published by NASA and featured in Astronomy, Sky at Night, Sky & Telescope, Astronomy Now, National Geographic, the Daily Mail, Yahoo, Space.com and many other well-known online publications.