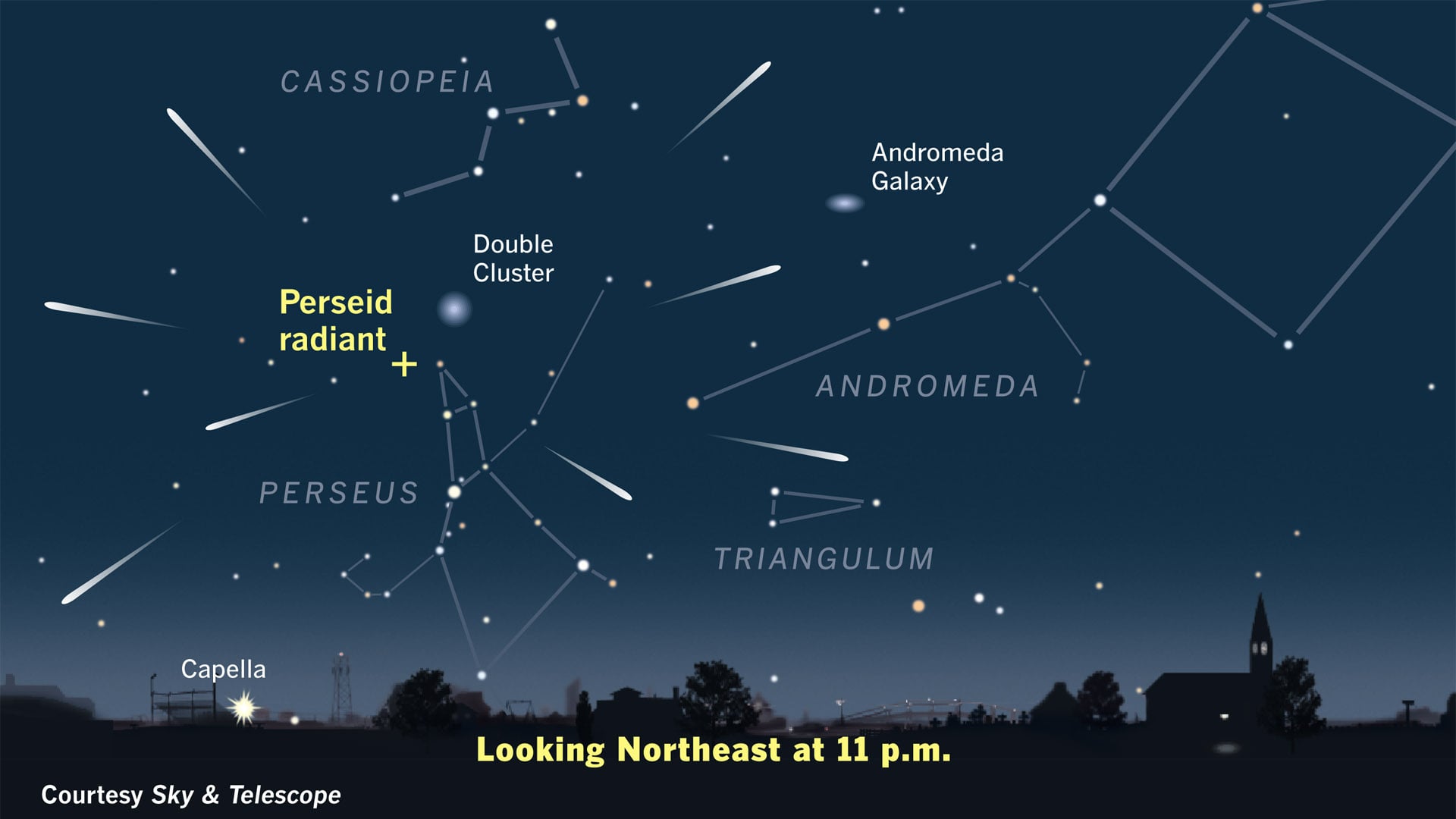 Perseid meteor shower radiant with constellations at 11 p.m. Published with permission from SkyandTelescope.com

Mount Washington — Summer’s real fireworks, the Perseid meteor shower, is predicted to peak overnight tomorrow, Tuesday, Aug. 11, until dawn Wednesday the 12th. Plan on a night out! The day before and after peak also provide opportunities to catch heightened numbers of shooting stars. Look before moonrise tonight, the 10th, and before dawn tomorrow morning, the 11th. Continue this rhythm through dawn Thursday.

Perseid meteors are seen every year from mid-July until the last week in August when we, along for the ride on planet Earth, delight in orbiting through the debris field left by comet Swift-Tuttle, a periodic comet that returns every 133 years. Most recently, the comet, named after its modern day discoverers, was visible with the aid of binoculars in 1992.

The Perseid meteor shower is celebrated as one of the year’s best, with 100 meteors per hour expected under optimum conditions. This year, we are challenged to watch for the meteors in the presence of a waning moon. Fifty meteors per hour are expected. Moonrise is after 11 p.m. all week. Although the Perseids are most prolific in the hours before dawn when the constellation Perseus has climbed high in the sky, it is worth skygazing before moonrise and again before dawn. Refer to the calendar below for times of moonrise and dawn.

In space, the rock and metal comet fragments are called meteoroids. Small particles – mostly pea- to grains of sand- or dust-sized – become meteors when heated to incandescence as a result of friction as they enter Earth’s atmosphere at tremendous speeds. The average speed of Perseid meteors is 37 miles per second, creating fast-falling streaks of light with long, lingering tails. We could be swept away by colorful fireballs, too.

Perseid meteors appear everywhere in the sky, although it is useful and enriching to be aware of the apparent radiant, or source, in the northeastern sky at the edge of the constellation Perseus. Note that comets bear the name of their discoverers and subsequent meteor showers are identified by the location from which the meteors appear to originate. When there is a lull in meteor sightings, I look toward the radiant. Under dark skies – in the absence of artificial lights and other pollutants – the constellation Perseus is a beautiful, dancing figure, fitting a mythic Greek hero. Find the easy-to-spot “W”: Queen Cassiopeia sitting on her throne. Then, relax your gaze to take in the stars that trace the curving limbs of Perseus below Cassiopeia. Perseus rises close to zenith just before daybreak all week.

During the pre-dawn hours, looking east, greet the rising of winter constellations and the goddess of love and beauty, brilliant planet Venus.