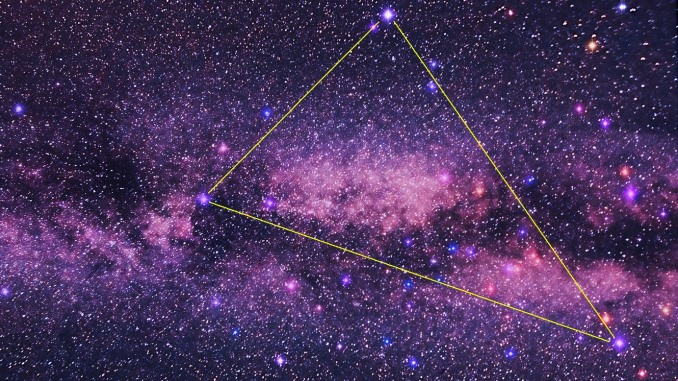 The Summer Triangle is a prominent heavenly landmark associated with the summer sky. Formed from the brightest stars in the constellations of Aquila, Cygnus and Lyra, this huge isosceles triangle can be seen from mid-northern latitudes directly overhead during the summer months. Image courtesy astronomytrek.com

Mount Washington — One month before summer solstice, which occurs Saturday, June 20, we find two of summer’s brightest stars rising above the east-northeast skyline as twilight deepens. Foretelling the summer season, Vega, third brightest star in northern skies at a magnitude of 0.00, rises in the northeast while less bright Deneb, 1.25 m, appears to the lower left of the blue-white beacon (the brighter the star, the smaller the number.) Deneb is the furthest star from Earth visible with the unaided eye.* About two and a half hours after sunset, Altair (0.75) rises in the east, joining Vega and Deneb to complete the Summer Triangle, one of the most prominent star patterns in northern skies.

Within an hour of sunset, spring’s brightest star, golden Arcturus (-0.07) shines above and to the right of Vega. Through the night, in clear, dark-sky locations, discover the charming circular pattern, Corona Borealis, the Northern Crown, sparkling between Arcturus and Vega.

Today, May 18, sunset is at 8:10 p.m. The sun sets about a minute later every evening for the rest of the month. Civil twilight begins about half an hour after sundown; nightfall, or astronomical twilight, two hours after sunset.

As the Summer Triangle rises in the east-northeast, the last of the great stars of the Winter Circle set in the west-northwest. Most prominent among them, Procyon (0.37) sets before midnight and Capella (0.06) after midnight this week. The Gemini Twins, Castor (1.56) and brighter Pollux (1.15) are poised above and between Procyon and Capella.

Now to the fleeting drama that is the piece de resistance of all celestial events this week: Dazzling planet Venus (4.31) and comparatively dim planet Mercury (-0.86) are celebrities among the bright stars of the Winter Circle all week. But both planets are following close to the setting sun, so locating little Mercury low to the west-northwest skyline might require the aid of binoculars. A clear view to the western horizon is of the essence.

This Thursday, the 21st, Venus and Mercury coincide in closest approach to each other, an exciting event known as conjunction. Be aware that sunset is at 8:14 p.m. on the 21st; Mercury sets at 9:52 p.m. and Venus at 10 p.m. Study the diagrams to guide your enjoyment of Venus’ final days as Evening Star in spring 2020.

Consider the implications of 5G for life on Earth – https://www.5gspaceappeal.org/