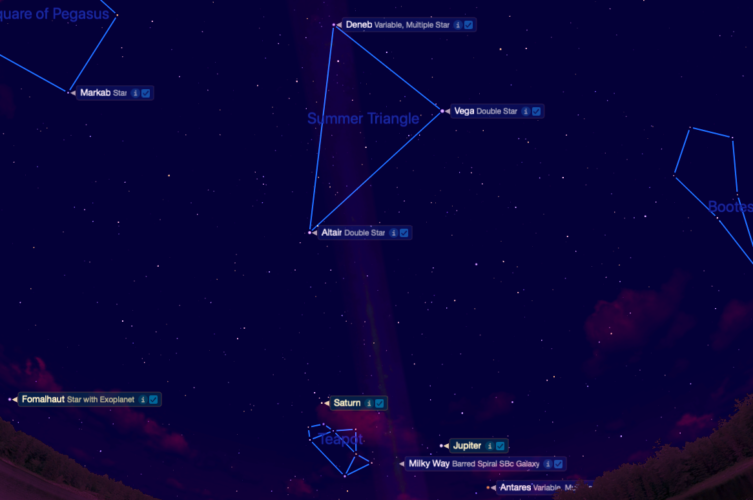 Mount Washington — I am always giddy at the turning point of the season when red and gold leaves fall by day, darkness falls perceptibly earlier every evening and, during the last few weeks of Eastern Daylight Time, bright stars are visible rather late in the morning. The brightest shine into dawn, or civil twilight, which begins within minutes of 6:40 a.m. to 7 a.m. for the rest of this month through Nov. 2. Clocks are turned back an hour to Eastern Standard Time on Nov. 3.

Before launching into the joys of stargazing in the morning without the need to set an alarm clock, let’s plan to observe tonight’s sunset in the west at 6:14 p.m. and the nearly Full Hunter’s Moon as it rises in the east at 7:02 p.m. It is equally restorative to observe the large moon as it approaches the western horizon tomorrow morning while the Sun rises opposite at 7:06 a.m.

Let morning stargazing begin! The darkness of night, when all naked eye stars and constellations are visible, prevails until about 5:35 a.m. this week and 5:50 a.m. at month’s end. While temperatures are rather mild, stroll under the star patterns of winter until about 6:30 a.m. Most prominent among them, Orion the Hunter, in the southwest, is the radiant of the Orionid meteor shower, predicted to peak during the hours before first light on Tuesday morning the 22nd, with suggested viewing also on the 21st and 23rd. The light of the last quarter moon will limit visibility.

Delight in the figure of Leo the Lion in the east, the springtime constellation on the heels of winter. Stir to the sight of harbinger of spring star Arcturus, which rises in the east-northeast at 5:32 a.m. on the 26th, to the left of a delicate crescent moon. In hilly terrain, expect the star to climb above the skyline later and be visible in the dawn sky.

The pleasure of observing Arcturus rise in the morning sky is all the more exciting when we observe it set the night before: at 8:53 p.m. tonight, the 14th; 8:06 p.m. on the 26th. Refer to the diagram of the evening sky for details.