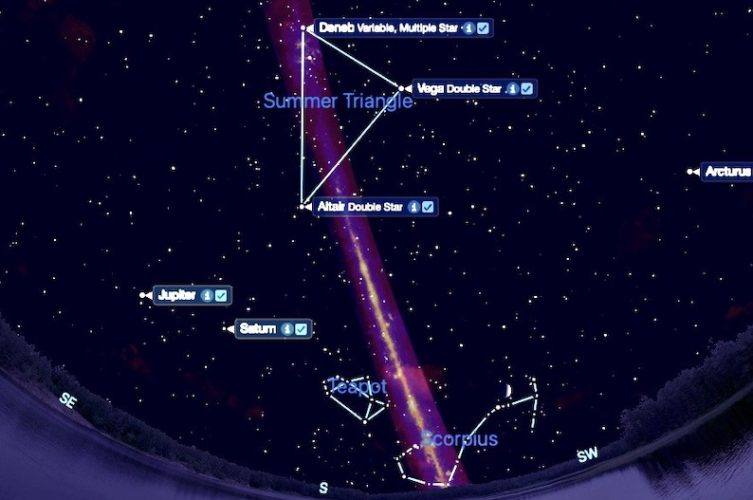 Diagram, mostly accurate for Sept. 6–19, fixes the sky on Sept. 12, 2021 at 8:20 p.m. The waxing crescent moon appears above Antares, the heart of Scorpius. The pink line represents the Milky Way. Venus has disappeared into the hills in the west-southwest, below Arcturus. On the 12th, Venus sets at 8:38 p.m. at horizon views. Illustration: Judy Isacoff / StarryNight

“The space beyond Earth is so incredibly vast.”—NASA

MOUNT WASHINGTON — Planet Jupiter shines with startling brilliance above the southeast horizon in evening twilight. The great planet, orbiting fifth out from the Sun in our solar system, could be mistaken for the light of a low-flying airplane above the hilly skyline. Jupiter (-2.83 magnitude) is the Evening Star rising in the southeast while dazzling planet Venus (-4.05m) is the Evening Star setting in the west-southwest. Note that the smaller the number the greater the magnitude of a celestial object. Sunset is, roughly, 7:15 p.m. this week and 7:00 p.m. next week. Twilight begins about half an hour later and, for nightfall, add another hour.

Saturn (0.34m), to the right, south, of Jupiter, seems a dim, copper-colored star at dusk. Jupiter’s reflected sunlight dwarfs the ringed planet, which increases in visibility as twilight deepens, although still markedly less luminous than Jupiter. The largest planet in our solar system, Jupiter orbits five times farther from the Sun than Earth, and Saturn is twice as far from the Sun as Jupiter, according to NASA. We are challenged to grasp that our naked eye observation of side-by-side Jupiter, so bright, and Saturn, so modest, is, in part, a function of the vast space between the two planets. By the numbers, Jupiter is 466,734,232 miles from the Sun compared to Saturn at 924,340,700 miles. Earth is 93,760,363 miles from the Sun.

Jupiter and Saturn can be observed all night, arcing from southeast to west-southwest, where they set during the hours before dawn. When seen through the night, Jupiter simply appears to be a bright white star traveling in tandem with dimmer Saturn to its right.

As summer turns toward autumn — the autumnal equinox occurs on September 22 — opportunities to admire Scorpius the Scorpion are coming to a close. To the right of Jupiter and Saturn, the full figure of Scorpius comes into view skimming the south-southwest horizon as darkness gathers. The Scorpion’s heart star, red Antares (1.03m), will be visible before lesser magnitude stars that punctuate the curves of the outstanding Scorpion. Antares is 550 light years from Earth. Reach out to Antares and the Scorpion before 9 p.m.

A light-year is the distance light travels in one Earth year. One light-year is about 6 trillion miles (9 trillion km). That is a 6 with 12 zeros behind it!