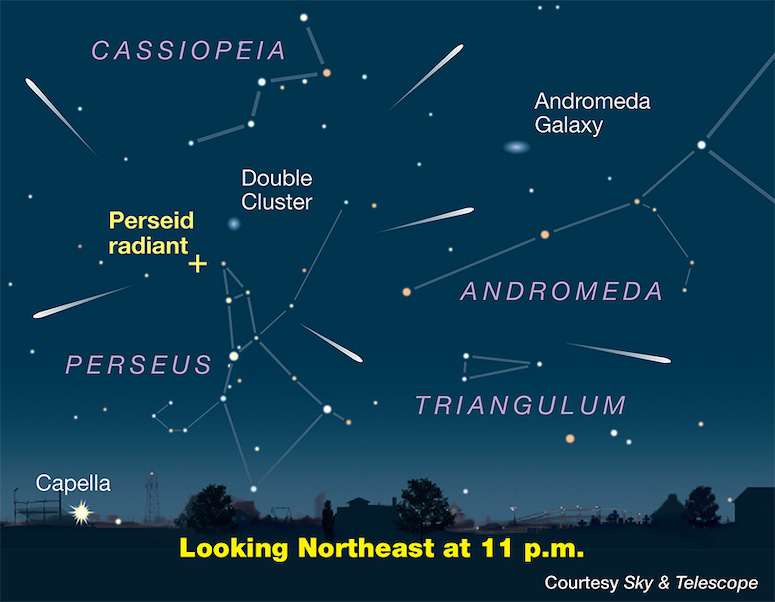 The radiant point of the Perseid shower gets fairly high in the northeast by 11 p.m., so the meteors become more frequent. The higher a shower's radiant, the more meteors are seen all across the sky. Peak viewing is Wednesday night, Aug. 11–Thursday dawn, Aug. 12; Thursday night through dawn Friday the 13th; and possibly Friday night, Aug. 13.

MOUNT WASHINGTON — The Perseid meteor shower, one of summer’s most alluring astronomical events, is known to rain 50 to 100 shooting stars per hour at peak, seen all over the dome of the sky. This is an exceptional year to see the Perseids, since the moon, a waxing crescent, sets in early evening. The greatest number of meteors is predicted to be observed during the period from Wednesday night, August 11 through Thursday dawn, August 12 and again Thursday night through dawn Friday the 13th, with possible Friday night, August 13. For optimum viewing, plan to settle in at a dark sky location for at least an hour and a half (allow 20 minutes away from artificial light for eyes to adjust). Most salutary, set up for sleeping outdoors overnight, to watch and dose through the whole show.

Whether exploring the summer sky with binoculars or the naked eye, morning stargazing is particularly intriguing, seeming to turn our world upside down as winter stars rise into view before vanishing at dawn. At 4 a.m. we see the iconic winter constellation, Orion the Hunter, stretched out on the eastern horizon. The head of Taurus the Bull floats above; Aldebaran its orange eye. Bright stars Capella the Goat, Aldebaran, and Betelgeuse form a right-angle triangle.

For those who would appreciate viewing the Perseids from a couch, here is the ticket. On August 11 at 11:45 p.m., livestream the Perseid Meteor Shower from McDonald Observatory in Fort Davis, Texas.

For early-to-bed stargazers, there’s brilliant Venus poised to set in the west close to 9:30 p.m. (9 p.m. in hilly terrain) and Jupiter beaming from atop the east-southeast skyline at the same time. Dimmer Saturn is to Jupiter’s right, southeast, with an hour’s head start. The two great planets travel in tandem all night, arriving in the southwest at 4 a.m. Observe Jupiter set before washed out by quickening dawn. Sunrise is within a few minutes of 6 a.m. for the fortnight ahead. Sunset is at 8:03 p.m. this evening and, on the 22, 7:45 p.m.

August’s Full Green Corn Moon rises in the east-southeast on the 22nd at 8:21 p.m.

Addendum: The backstory
Every year, from around July 17–August 24, our planet Earth crosses the orbital path of Comet Swift-Tuttle, the parent of the Perseid meteor shower. Debris from this comet litters the comet’s orbit, but we don’t really get into the thick of the comet rubble until after the first week of August. The bits and pieces from Comet Swift-Tuttle slam into the Earth’s upper atmosphere at some 130,000 miles (210,000 km) per hour, lighting up the nighttime with fast-moving Perseid meteors. Information from EarthSky.org.