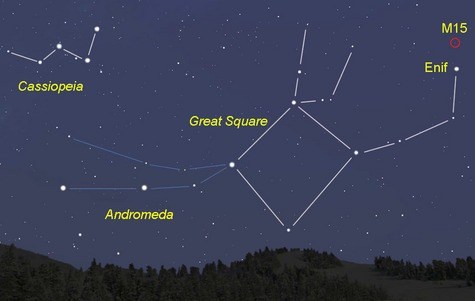 Mount Washington — At nightfall, look for the Great Square of Pegasus suspended above the eastern horizon. The Great Square is an easy-to-recognize pattern that is shaped by three stars of the constellation Pegasus – the winged horse of ancient Greek mythology – and one star belonging to Andromeda, the constellation that follows Pegasus in the sky.

The Great Square is an asterism, which is different from an official constellation: An asterism is a prominent star pattern that represents the brightest part of a constellation or a design composed of stars from more than one constellation. The Great Square may be visible in less-than-ideal stargazing conditions, whereas the whole of the flying horse, which includes dim stars, requires unpolluted, dark skies.

Most diagrams of Pegasus succeed in making the Great Square readable and nothing else. H. A. Rey, the children’s book author and illustrator, offers this redrawn figure in his book “The Stars: A New Way to See Them”:

Rey writes, “The triangular wing, made up of three of the Square’s four stars, is fastened to the Horse’s rump. This will look unorthodox to airplane designers but the Horse manages to fly all right.”*

According to Rey’s drawing, we are not looking at the body of the horse in the Square, rather, we are encouraged to imagine the wing of Pegasus in the triangle created when we connect the stars in the Square’s leading half. Pegasus moves from east to southeast, right, in the early nighttime hours.

Look for planet Venus in the southwest within half an hour of sunset in the coming days, before she disappears from the night sky. Gazing to Venus’ left, Jupiter appears within 45 minutes of sunset; Mars, still brighter than Jupiter, is also visible in the southeast before nightfall.

Stargaze early in the week before the light of the waxing moon dominates the sky. The Full Harvest Moon occurs at 10:52 p.m. on Monday the 24th.

Williams College Planetarium Shows, free of charge
Fridays at 8 p.m., September through Dec. 7 – For reservations (required), contact Michele Rech at (413) 597-2188 or mcr4@williams.edu. Others will be admitted as space permits. Large groups should call for special appointments.
https://communications.williams.edu/news-releases/9_14_2018_planetariumfall2018