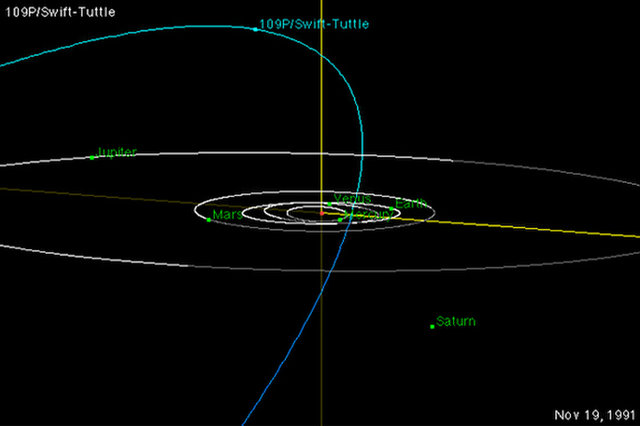 Comet 109P/Swift-Tuttle approaches Earth every 133 years during its oblique orbit around the sun. It last approached Earth in 1992 and will return in 2126. Its path of debris causes the annual Perseid meteor shower. Image courtesy NASA/JPL

Mount Washington — See streaks of light dart through a field of stars glittering in darkness. Streaks of light with long and lasting trails stir eyes, heart and voice to heaven’s touch. One of the greatest shows of the season here on planet Earth is underway right now; it is the Perseid meteor shower.

A meteor is light produced by space debris burning up due to friction as it enters Earth’s atmosphere at high speed. In the case of a meteor shower, the source of the bright, ephemeral streaks of light is cosmic rock dust from a parent comet. The luminescent bits are called meteors; the largest, brightest meteors are fireballs. Every year, from mid-July through about the third week of August, Earth orbits through the dusty, icy rubble stream left by comet Swift-Tuttle. In modern times, two American astronomers independently discovered that comet within a few days of each other: Lewis Swift on July 16, 1862, and Horace Parnell Tuttle on July 19. Their namesake, last seen in 1992, is forecast to appear again in 2125.

The meteor shower associated with this comet is named for the constellation Perseus, which occupies the place in the sky from which the shooting stars seem to originate, or radiate. Perseus, the radiant, rises above the northeast horizon around 11 p.m. He is best seen in dark skies. It is worth noting that Perseus travels below the easier to identify “W” star pattern that is Cassiopeia.

Shooting stars may be seen all over the sky. It is useful to know the radiant because the incidence of meteor sightings increases as the radiant rises higher above the horizon. Perseid meteors are more intense after midnight and especially as Perseus climbs highest before dawn. Conditions are propitious all week as Earth moves through the debris spread along the comet’s orbit. In dark-sky locations, anticipate a maximum of 70 meteors per hour as the shower peaks overnight Saturday the 11th until dawn on Sunday the 12th and again overnight Sunday until dawn on Monday the 13th. Some sources predict best viewing overnight Sunday.

Bear in mind that true darkness over the upcoming weekend is from about 9:50 p.m. until about 4 a.m. Fireballs are bright enough to be seen in light-polluted areas.