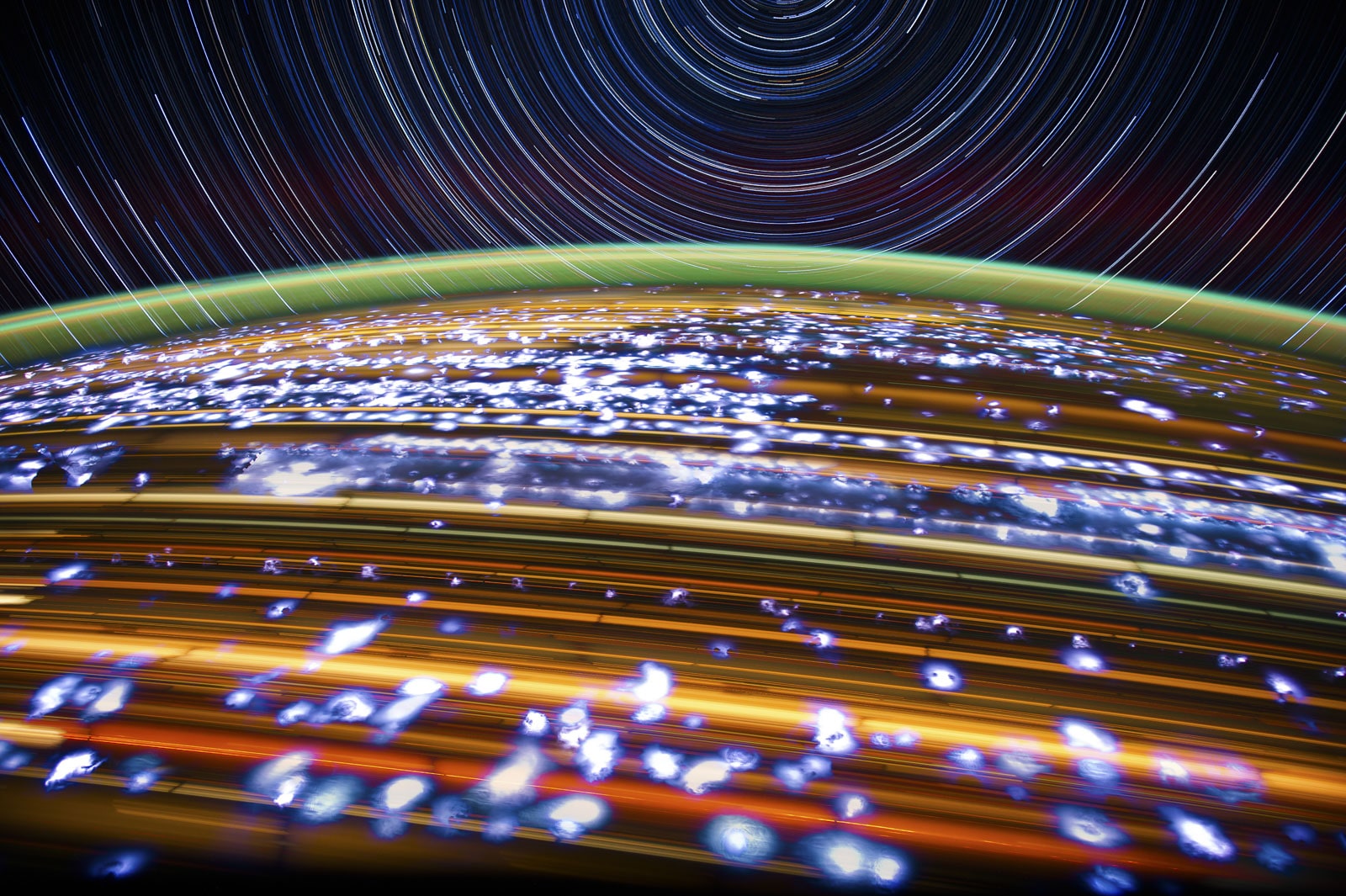 Mount Washington — The spectacular image above was produced by Donald R. Pettit, a NASA astronaut, from multiple photographs captured during Expedition XXXI of the International Space Station orbiting 240 miles above Earth. “It is a star trail and Earth image showing massive thunderstorms. The white flashes are lightning popping off over an urban area, similar to a photographer moving and firing a strobe through a scene in the dark. The green arc is the atmosphere seen on edge. Rotation of ISS during exposures creates circular star trails, while city lights of varying color temperatures create streaks on the ground.” Camera: Nikon D3S. Image: sequential exposures stacked in post production to create the equivalent of a single 30-minute exposure.*

Don Pettit will be a featured speaker at the Northeast Astronomy Forum Saturday, April 6, at Rockland Community College in Suffern, New York. An annual two-day event, NEAF will be in full swing both the 6th and 7th. Billed as the “World’s Largest Astronomy & Space Expo,” enthusiasts come from near and far. Pettit will also present in the specialized program of the Northeast Astro-Imaging Conference, to be held April 4 and 5.

The ambitious program includes numerous seminars, solar viewing through shielded telescopes, and 120 exhibitors and vendors enthusiastic about sharing their knowledge with the general public, including children.

Suffern, New York, is a two- to three-hour drive from western Massachusetts.

For more information, please see “Opportunities to participate” and “Resources,” below.

Eyes to the Sky, April 2018 – https://theberkshireedge.com/eyes-to-the-sky-stars-of-astronomy-and-space-shine-at-neaf/

*Photo and captions provided by Peter A. Blacksberg, executive producer, “Portraits of a Planet: Photographer in Space,” a 2018 exhibit of Don Pettit’s images at the University Gallery at Rochester Institute of Technology
https://www.rit.edu/fa/gallery/content/portraits-planet-photographer-space
https://www.rochestercitynewspaper.com/rochester/art-portraits-of-a-planet-photographer-in-space/Content?oid=5916715