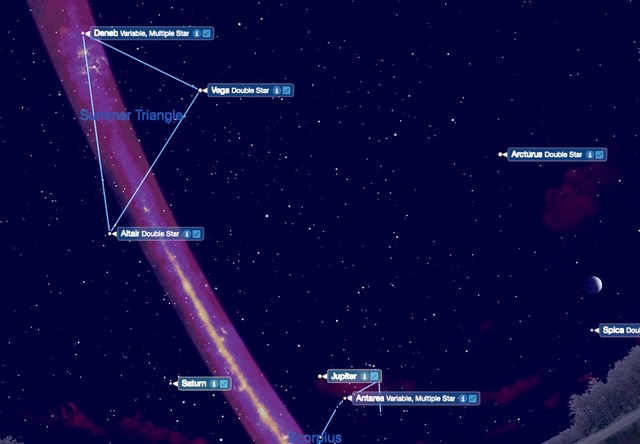 Mount Washington — A profusion of celestial lights comes into view these August evenings and through the night. The promise of seeing bright planets, the moon, summer’s brightest stars and shooting stars is an invitation that, when accepted, may reveal unexpected lights of earthly origin. One recent night at about 10 o’clock, I walked to a clearing with a view to the southeast. Fireflies surprised me – not as many as earlier in the summer, but a welcome presence. Then, while looking up to the three brightest stars of the Summer Triangle, I was startled by frenetic flickers and diffuse light patches in my peripheral vision. Heat lightning! The first I had seen this summer. Returning my focus to the Triangle’s faraway Deneb, Vega and Altair, my eyes were drawn to yet another unexpected light: The incandescent beacon of the International Space Station cruised above the eastern horizon and disappeared. To my delight, a green frog punctuated the scintillant light show with its distinctive, throaty “GUNGK” from out of the darkness of a nearby pond.

Below the Summer Triangle, we find golden planet Saturn at the upper edge of the Teapot star pattern. Look closely at the diagram to discern the boxy teapot. A ways to the right, south, Jupiter blazes above red Antares, Scorpius’ heart star. Jupiter is so bright that it shines in evening twilight. In a dark sky, with a clear view to the south, the whole figure of the Scorpion will be visible.

Continuing to the right, to the west-southwest, on the 5th, a waxing crescent moon appears below orange Arcturus, the brightest star in the summer sky; Vega is a close second. See the moon diagram for the moon’s placement with the planets and Antares later this week.

Every year, from about July 17 through Aug. 24, planet Earth orbits through the debris field of Comet Swift-Tuttle, the parent comet of the Perseid meteor shower. The Perseids – which, under ideal conditions, have been known to shower 50 to 300 meteors an hour – are predicted to peak overnight on Aug. 12 until before dawn on the 13th. Light pollution and moonlight interfere with optimum viewing. The moon arrives at full phase on the 15th. The moon lights our skies all night when it is close to and at full phase. On the 12th, moonset is at 3 a.m.; on the 13th, 4 a.m. This year, our best chances to see Perseid meteors will be during the hours before dawn between now and peak. Shooting stars are visible all over the sky. The Perseids appears to radiate from the constellation Perseus.