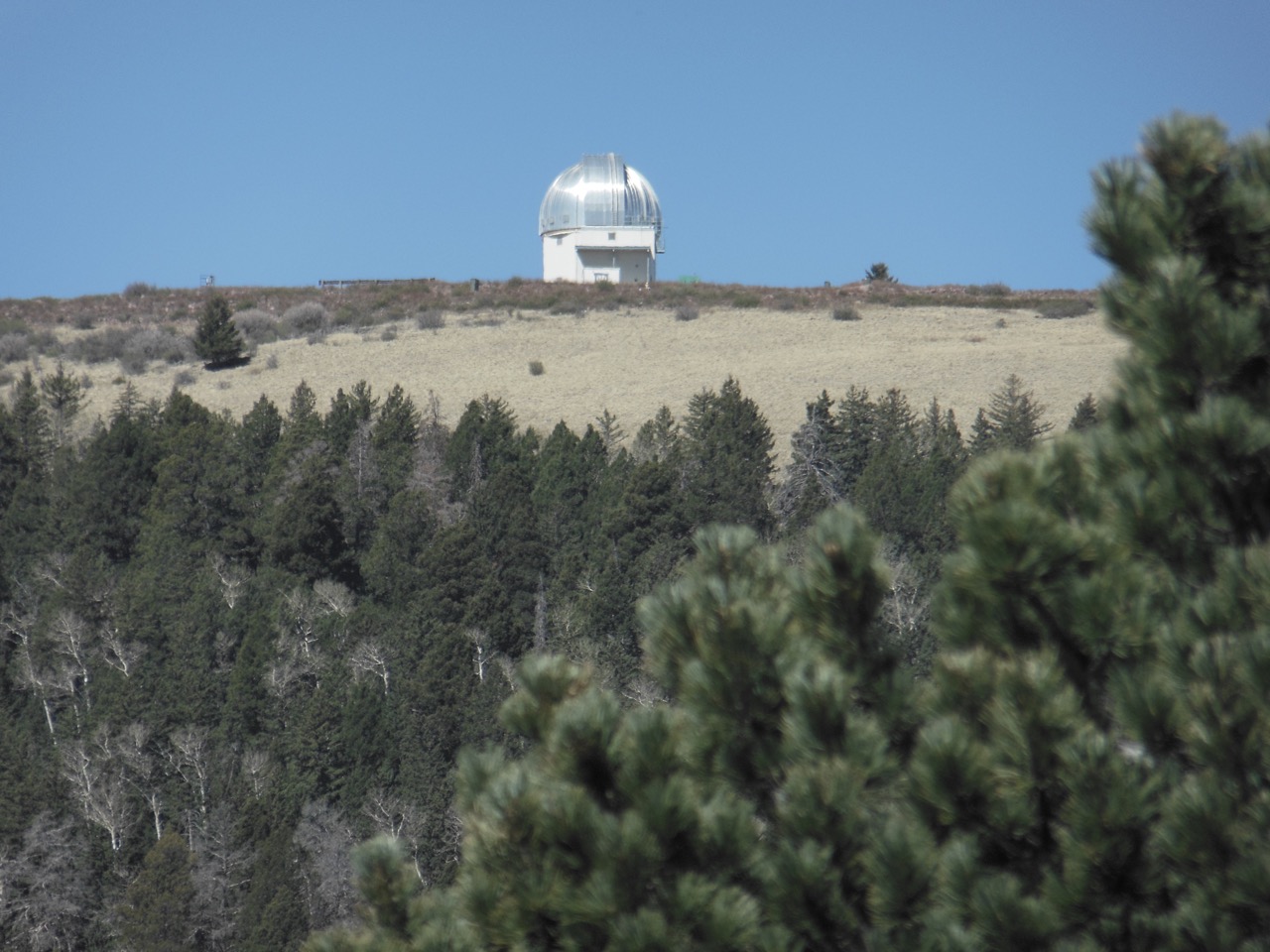 Mount Washington — When we look up to the night sky, we see beyond Earth’s protective atmosphere to the planets in our solar system and the universe of stars that comprise our galaxy, the Milky Way galaxy. To the eyes of astronomical researchers and faculty at New Mexico Tech in Socorro, New Mexico, there’s a world of Near Earth Objects (NEOs) — and occasional Interstellar Objects (ISOs) — between Earth and space. Thanks to the whole-hearted welcome extended to me by Eileen V. Ryan, Ph.D., director of the university’s Magdalena Ridge Observatory (MRO), I broadened my awareness of the study of these natural and human-made bodies. Dr. Bill Ryan, MRO research scientist, joined his wife and collaborator in describing their work with MRO’s 2.4 meter telescope. A responsive team, NMT personnel and guest researchers search for asteroids that could be on a trajectory to collide with Earth and, among other initiatives, observe human-made satellites to determine possible threats. MRO partners with major space agencies tasked with maintaining national security.

Astrophysicist Dr. Daniel A. Klinglesmith III, whose commitment to offering astronomy experiences to the public includes conducting star parties, invited me to the Etscorn Campus Observatory where I looked over his shoulder at his computer screen, which is connected to Etscorn’s 14-inch Schmidt Cassegrain telescope, as he tracked an asteroid he is studying. He is advisor to the NMT Student Astronomy Club, which takes responsibility for the operation of Etscorn, where monthly star parties are hosted. Dr. Klinglesmith’s research focuses on asteroid light curves.

The Magdalena Ridge Observatory, primarily a research facility, is located at the top of a 10,612-foot peak in Cibola National Forest. I knew that access is restricted, but memories of other astronomical sites I’ve visited prompted me to express interest in seeing the MRO. I pictured a paved road to a spacious summit. I was delighted when Eileen Ryan arranged for me to meet Craig Wallace-Keck, who would give me a tour and a ride “in his 4-wheel drive truck, necessary to negotiate the rugged terrain.” Wallace-Keck regularly checks systems at the observatory and keeps all manner of support equipment functioning. Agile as an acrobat, he maneuvered the truck up the 6,000-foot elevation gain, effortlessly taking switchbacks on the narrow, red gravel road that looks down through the vital forests of Water Canyon. He spoke of minus 38-degree temperatures, 8 feet of snow, gale-force winds and 50 truckloads of materials being hauled up this road to build the observatory.

Then we were inside the quiet space of the control room, equipped for scientists to pursue their studies, the dome of the observatory adjacent, with its great eyelid to be opened to the sky so that the remarkable 2.4-meter mirror of the telescope might look out, a formidable tool for gathering light.

I have written this preamble to the work of the Magdalena Ridge Observatory and provided illustrations and a Resources section as guides to further investigation. In closing, I have a message from Dr. Eileen Ryan. I asked her, “What is most important to convey to readers?” She said: “Tell girls and women that careers in science do not require waiting for or giving up their personal fulfillment in love, work and knowledge. When my son Liam was a baby I was scheduled to present a paper at the American Astronomical Society. I, as well as other female scientists with small children, told the conference coordinators that they had to offer child care, and they did!”

See illustration of Liam Ryan working on a science fair project to measure gravity at different elevations. Eileen Ryan wrote: “He won 2nd place in the State. His objective was to take data to see how gravity changed from down in the valley of Socorro, 4,200 feet, again a bit higher up at our home, 6,500 feet, and then at 10,612 feet at the telescope. It kept him busy while we were observing! He correctly measured that gravity decreased with increasing distance from the center of the Earth.”

What is a Satellite? – https://www.nasa.gov/audience/forstudents/k-4/stories/nasa-knows/what-is-a-satellite-k4.htmland Orbiting distances above Earth – https://earthobservatory.nasa.gov/Features/OrbitsCatalog/