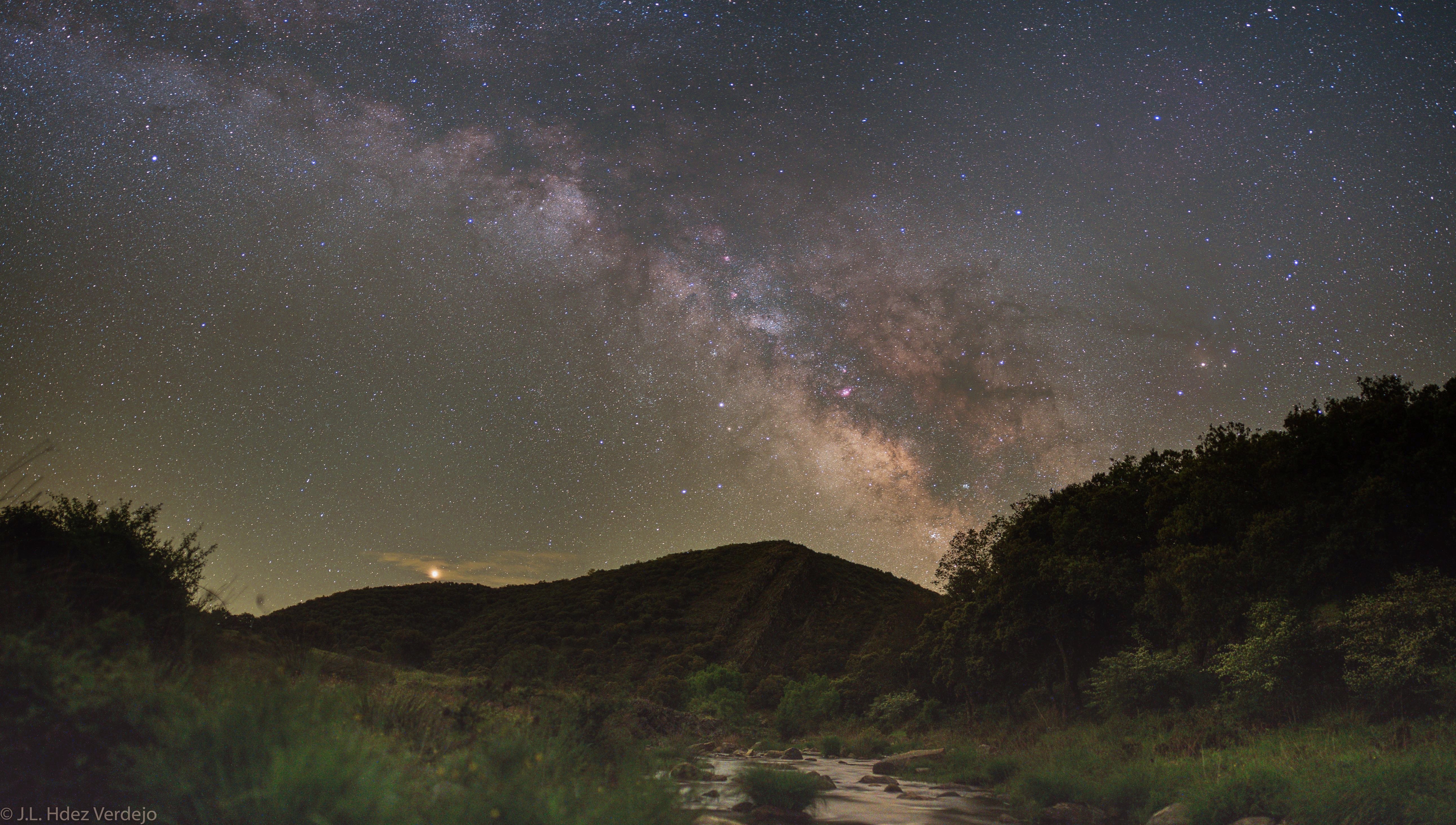 Mars shines brightly now in planet Earth's sky. Seen with a yellowish hue, it rises over the hills and far away in this serene night skyscape, a countryside panorama recorded in May 2018 from Parque Nacional de Cabaneros in Spain. The Milky Way, too, extends above the distant hills into a starry sky. Its faint pinkish nebulae, cosmic rifts and rivers of dust are mingled with the pale, diffuse glow of starlight. Mimicking Mars' yellow tint, bright star Antares shines to the right of the central Milky Way starclouds. Of course, CubeSats from Earth are on their way to the Red Planet. Photo: Jose Luis Hernandez Verdejo, used with permission

Mount Washington — The culmination of an extraordinary celestial event is underway.* Look to the southeast at nightfall: A glowing golden orb rising above the skyline will bewilder you if you have not seen planet Mars recently. Distinctly yellowish and shining at a magnitude of -2.75 today, Mars reaches greatest brilliance (-2.78m) from the 26th through the 28th, Thursday through Saturday, when the planet’s orbit brings it closest to both the Earth and to the Sun. To fully appreciate the impression of the planet, see it before the Full Thunder Moon approaches toward the end of the week. Study the illustrations.

The significance of this Mars perihelion and opposition** is best stated by the Association of Lunar and Planetary Observers (ALPO): “The 2018 perihelic [peri=around, helios=sun] apparition of Mars will prove to be one of the most favorable since the 2003 apparition when the red planet came closest to Earth in 59,635 years (the year 57,617 B.C.).” Take a breath and look again. The next best opportunity will be in 2035.

Usually referred to, and seen, as the “red planet,” the current yellow color is the result of dust storms obscuring the planet’s surface. View Mars from nightfall to first light. It is particularly lovely as it sinks into the hills to the southwest. I have observed it looking pinkish recently at 4:30 a.m.

Mars’ intensity gradually decreases through the month of August. Among the planets visible with the naked eye during this apparition, Mars is brighter than Jupiter (-2.15m) and Saturn (0.15m); it is second only to Venus (-4.16m).

Mars is so bright that it is visible even under light-polluted skies. To restore the Milky Way to our picture of the night sky—a nod to Jose Luis Hernandez Verdejo—we must cease to degrade our environment with light pollution. It is possible to bring back the Milky Way to everyone’s sky if we vote for it. Please respond to the following notice:

Background: The Massachusetts House and Senate have passed two different versions of the 2018 environmental bond bill, aka “An Act promoting climate change adaptation, environmental and natural resource protection, and investment in recreational assets and opportunity.”

Call/email — this is a pioneering effort

Astronomy Picture of the Day – https://apod.nasa.gov/apod/ap180609.html