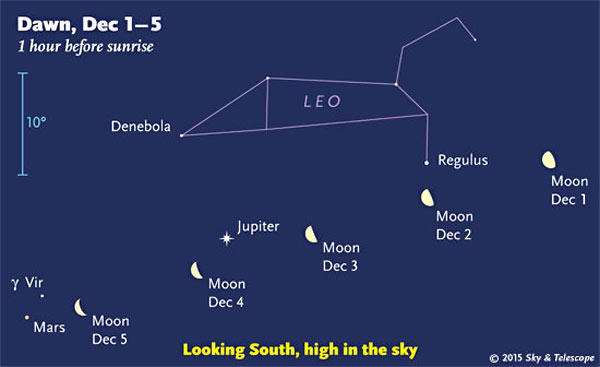 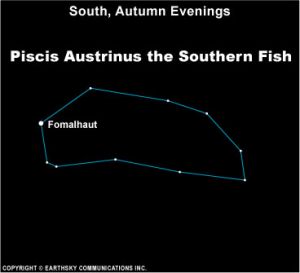 Mt. Washington — Night falls in the late afternoon in December and bright stars ring the horizon within the hour after sundown. The earliest sunsets of the year, 4:21 p.m., occur from the 6th through the 13th. Most of the month sunsets are just a minute or two later. It’s a fine time of year to introduce children to the night sky, or to stargaze before dinner. At nightfall, a lone star, Fomalhaut, the 13th brightest star visible in the northern hemisphere, stands out low in the south where Scorpius the Scorpion appeared over the hills on summer evenings. Fomalhaut is from the Arabic fam ‘mouth’ + al ‘the’ + hut ‘fish’ and represents the mouth in the constellation Piscis Austrinus, the Southern Fish.

Continue to turn counterclockwise, to the east, where Aldebaran, the red eye of Taurus, is a riveting sight in the triangular face of the Bull. Above and left of Aldebaran, in the northeast, golden Capella shines; it is the 4th brightest star visible from the northern hemisphere. Further left, the Big Dipper lies on the northern horizon in the evening. Follow its “pointer stars” to Polaris, the North Star, and back to Capella (see diagram.) Circling left again, now to the northwest, the stars of the grand Summer Triangle are suspended higher in the sky at nightfall than the other stars on this tour. Vega, 3rd brightest star in our skies, marks the west-northwest corner; Altair the west-southwest and Deneb are high above Vega. This Deneb, by the way, represents the tail in the constellation Cygnus the Swan. Scan to the south, left, to complete the circle and arrive back at Fomalhaut.

As night extends later into morning it is not too much of a stretch to rise 60 – 75 minutes before sunup to be outdoors to witness the transporting cosmic events visible just before first light. Sunrise is at 7:02 on the 1st and 7:13 on the 13th. All month, luminous planet Venus, brilliant Jupiter and red Mars are in a dynamic line up with bright stars Regulus and Spica, all under the beautiful form of Leo the Lion. The group is joined by a charming, waning (decreasing in size) moon every morning of the first nine days of the month. Orange Arcturus, the 2nd brightest star in northern skies, shines to the left of this joy-inspiring gathering.

Let’s remember new moon on the 11th and be sure to mark our calendars for the Geminid meteor shower on the weekend of the 12th – 14th. The Geminids promise to be one of the year’s best meteor showers. Peak is predicted for the night of the 13th until dawn on the 14th. For details, go to https://www.space.com/23281-geminid-meteor-shower.html, https://stardate.org/radio/program/geminid-meteors and https://www.chiff.com/science/geminids.htm