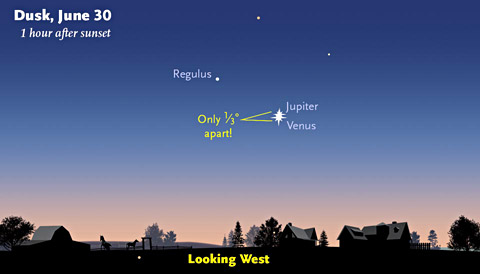 Mt. Washington — An exquisitely close meeting, or conjunction, of Venus and Jupiter, the brightest planets visible from Earth, is occurring in the western sky tomorrow evening. It has been suggested that together they may look like a double star, as they will appear a slight .3 of a degree apart. Look for a very charged alignment tonight, the 29th, and July 1, as well, when the space between the two will be just .6 degree. Through July 4, the pair will be separated by just 2 degrees or less. The planets slowly drift apart and appear lower in the west at dusk for the rest of the month. They remain side by side until the final week of July. 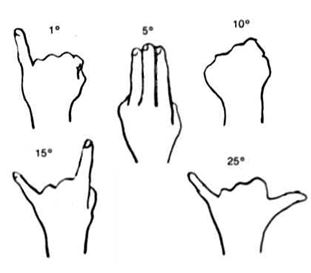 Extend a pinky finger at arm’s length into the space between the two heavenly bodies to measure 1 degree. When the tip of the little finger, extended at arm’s length, covers Venus and Jupiter, we measure less than a degree; a fist indicates 10 degrees.

In sum, tonight, July 29, find Jupiter poised to the upper left of dazzling Venus, the Evening Star. On the 30th Jupiter is predicted to be so close as to be barely distinguishable from Venus. Jupiter is descending from above left of the Evening Star; it moves to the right side of Venus on the 1st. While the great planet named for the king of the gods is dimming Venus increases in brilliance until it reaches maximum magnitude for this current apparition from July 8 – 14. The Evening Star sets at 10:55 p.m. tonight and 10:13 p.m. on July 12, at nearly the same moment as Jupiter during the coming 2 weeks.

Tonight, the waxing (increasing in size) gibbous (greater than half) moon shines to the lower left of yellowish planet Saturn about an hour after sunset in the south-southeast. Red star Antares, the heart of the constellation Scorpius the Scorpion, is positioned to the lower right of the moon, below Saturn. In the coming weeks, enjoy Scorpius low in the south at nightfall and until it sets in the southwest after midnight, Saturn shining brightly atop the convincing scorpion form.

On July 1, the Full Thunder Moon rises in the east-southeast at 8 p.m. It is the first of two full moons in July – the next occurs on the 31st. This atypical celestial phenomenon is known as a “blue moon” and occurs once every two – three years.

The latest sunsets of the year in our locale, 8:34 p.m., began on June 24 and continue through Thursday, July 2.

Heads-up! NASA’s New Horizons fly-by mission to Pluto and beyond, at the outer reaches of our solar system, is nearing its destination and the most intense research phase of the mission, to culminate on July 14. In project director Alan Stern’s words “. . . It’s a long way to go to the outer edge, the very edge of the solar system.”

From NASA’s website*: Closing in on Pluto at about 31,000 mph, New Horizons already has covered more than 3 billion miles since it launched on Jan. 19, 2006. Its journey has taken it past each planet’s orbit, from Mars to Neptune, in record time, and it is now in the first stage of an encounter with Pluto that includes long-distance imaging as well as dust, energetic particle and solar wind measurements to characterize the space environment near Pluto.