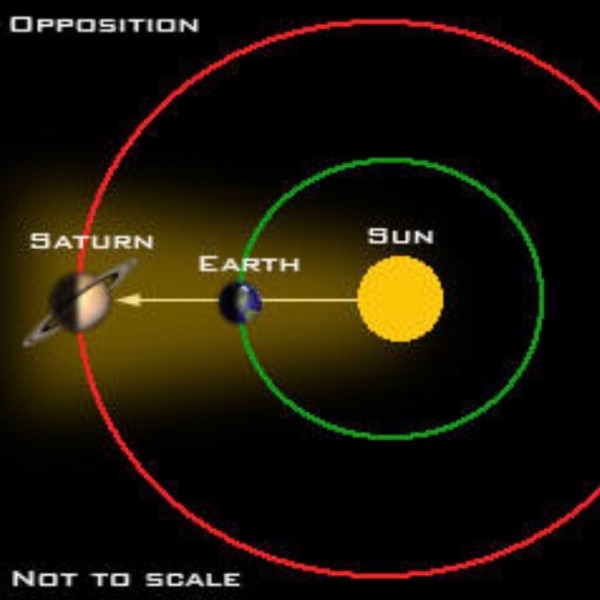 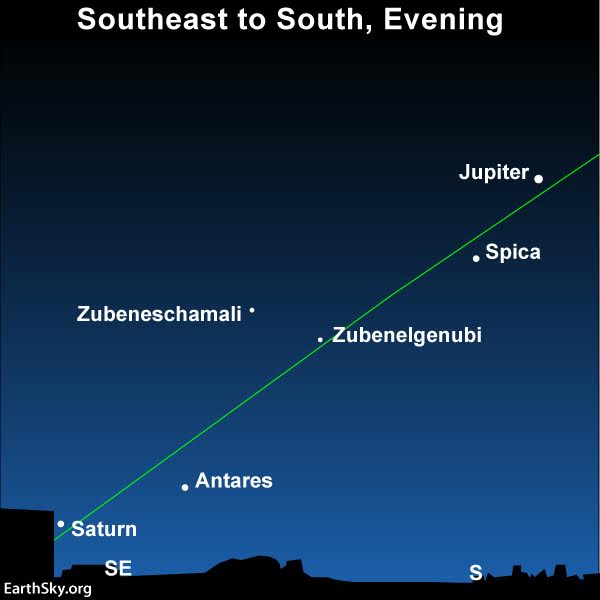 Mount Washington — Closest, brightest and most visible for the year, planet Saturn rises looking like a gold-tinted star above the southeast horizon around the time the Sun sets opposite, in the northwest. In astronomy, when two celestial bodies appear opposite each other in Earth’s sky, it is known as “opposition.” This year’s Saturn opposition occurs when Earth in its orbit arrives between the Sun and Saturn at 6 a.m. on the 15th. Tonight, three days before precise opposition, sunset is at 8:30 p.m. and Saturn rises at 8:27 p.m. The yellowish planet is visible in our skies all night, from dusk until dawn, traveling from southeast to southwest all month.

Rise and set times are for horizon views – moreover, naked eye observers won’t see sunset and planet rise simultaneously because we have to wait until the sky darkens somewhat for bright stars and planets to come into view. At my location, it could be close to an hour from the rise time of a celestial object to the time it appears above the ridge to the southeast. The effect of observing a planet or star rise or set is particularly celebratory, a little like enjoying the first flicker of the Sun rising or last blink at sunset. Saturn rises a few minutes earlier every day; by the end of the month, it will be well above the hills when darkness falls.

The next best part of welcoming Saturn into the evening sky is seeing the planet in the company of its celestial neighbors. Gaze to the right (south) of Saturn to reach red star Antares, then sprint further south and up to spot blue-white Spica. Jump up to planet Jupiter, the brightest star-like object in the sky. Close to midnight on the 12th and 13th, the gibbous moon follows Saturn into the late night and early morning sky, joining the string of bright planets and stars.