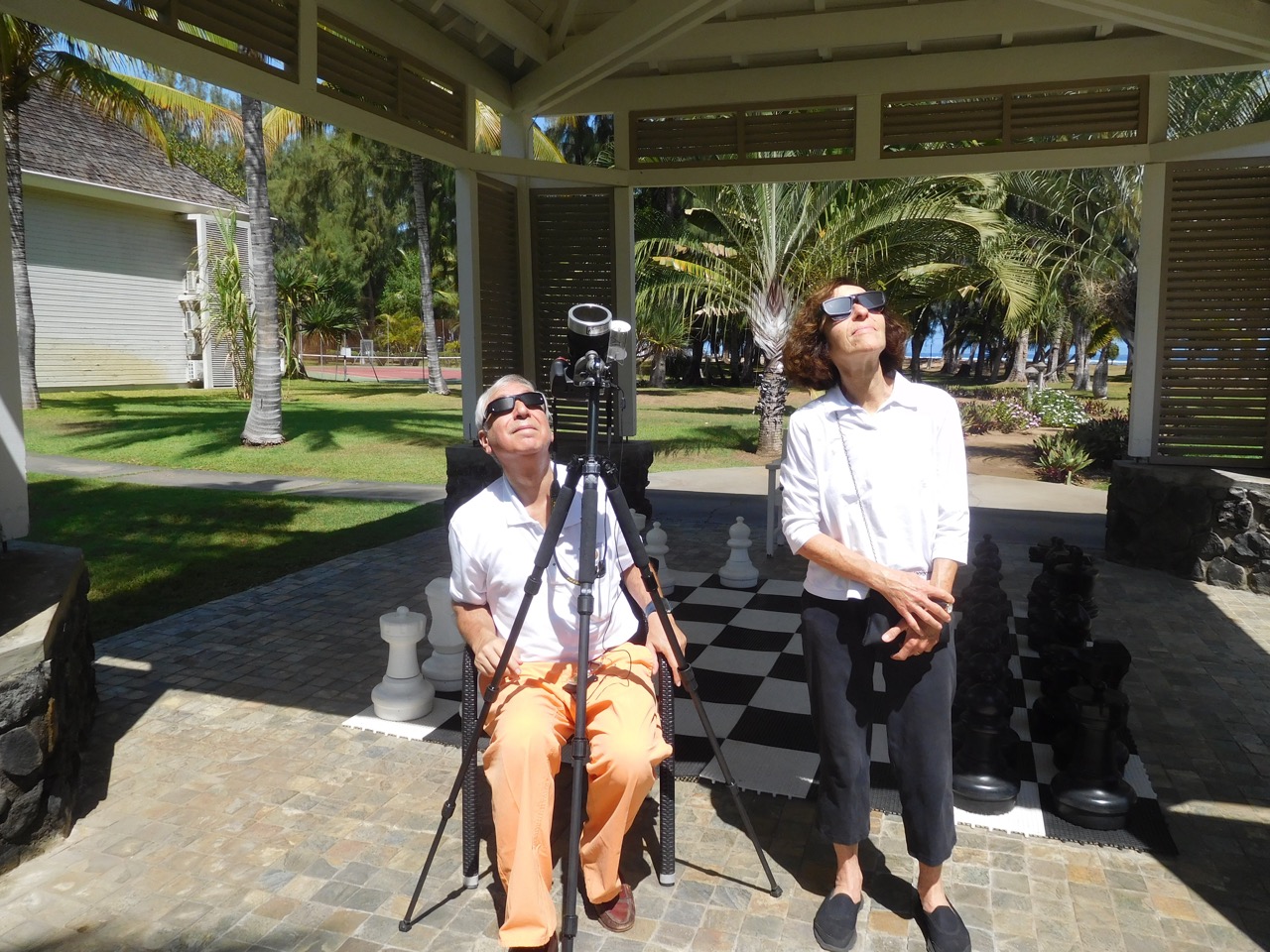 Jay and Naomi Pasachoff look through partial-eclipse filters before the annular phase of the solar eclipse they observed from Réunion Island in the Indian Ocean on Sept. 1, 2016. Photo courtesy of Jay M. Pasachoff, published with permission

The following short animations reveal the astronomy, wonder and mystery behind a total eclipse of the sun. These animations introduce what has been described as the most profound encounter with nature possible in human experience. The first is a 1 minute 14 second PBS simulation that describes the science. It is followed by a 30-second photographic animation that takes your breath away, produced by astronomer Jay Pasachoff.

And click HERE for Professor Pasachoff’s animation of a total solar eclipse.

What you will see if you stay at home in the Berkshires is a partial eclipse that progresses to the crescent phase of the sun – described as “first contact” in the PBS animation – and the return to full sun. Professor Pasachoff offers, “First contact and fourth contact, but not the interesting part, which is between 2nd and 3rd contacts.” He continues, “It’s fine for people to glance through a special solar filter every five or ten minutes during the partial eclipse on August 21 here in Berkshire County, but it isn’t spectacular and nothing changes very fast.”

To further inform your decision about whether to travel to the path of totality to observe the Great American Solar Eclipse, consider the comparisons between the experience of partial and total eclipse that follow: the first made by Pasachoff and the second by writer Annie Dillard.

In our backyard, the partial eclipse begins at about 1:25 p.m. on Monday the 21st of August, less than two months from now. At maximum eclipse, 2:45 p.m., the Sun will be a crescent of light, 72 percent darkened. That’s 1 hour 20 minutes from inception to peak. It will take another 1 hour 15 minutes for the sun to return to full. The partial eclipse ends at 3:58 p.m.

Eyes must be protected from the Sun’s light if you are to look directly at it or, alternatively, by devising ways to see it indirectly. Inexpensive cardboard-framed, sunlight-filtering lenses are readily available, as are instructions for creating devices for solar projection: the former illustrated in the Pasachoff photograph that opens this article and the latter in the closing photograph.