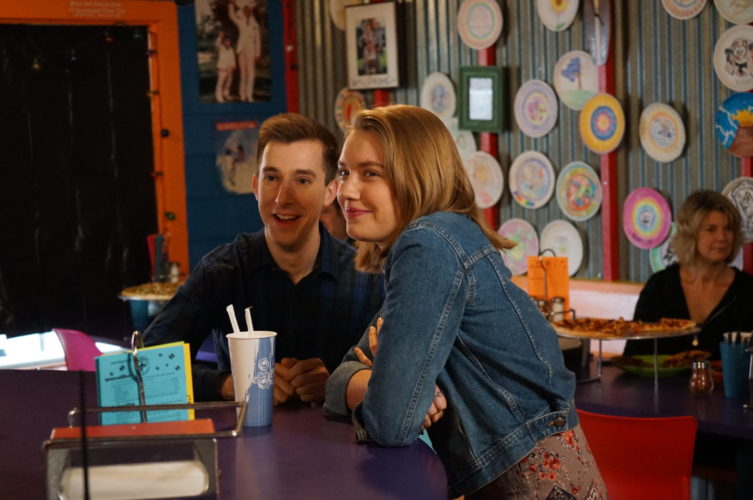 Protagonist Nathan and love interest Sarah at Betty’s. An Extra in the background. Photo: Courtesy of 'A Stroke of Luck.'

How does one prepare for the role of a lifetime in two hours?

I glance at the phone as it rings on the kitchen counter No ordinary call. That I know.

“Can you?” asks a voice on the other end.

Two hours?! How does one prepare for the role of a lifetime in two hours?

I pull a blank sheet of paper from my desk printer and review my “lines.” I take an actor’s breath, deep and intentional, from the diaphragm – and mouth empty air. Then again, this time “louder” and with careful diction. I will not embarrass myself by mumbling my lack of lines. I mouth again, this time with more feeling, more intensity. Yes, it can be challenging to imbue nothing with meaning. But the Dadaists did. And so shall I.

As I sink deeper into character (It’s called method acting, by the way, and it’s probably too complicated to explain here), I review what little I know about the movie. It’s a coming-of-age movie, filmed by a local director, and there are horses in it. I close my eyes and think about horses, horses coming of age…Little ponies turning into bigger ponies, filled with irrational adolescent emotions, rebelliously romping across a field, near Lenox Bagel & Brew.

I review the do’s and don’ts of being a Movie Extra. Do bring snacks. Do be positive. Don’t try to stand out. Do arrive early. Don’t look into the camera and wave “Hi Mom!” As one popular acting blog says: “Think of an extra as furniture, moveable furniture helping to set the scene.” I can be a sofa, a chair, a duvet cover. In any pattern. I’m versatile like that.

Scene One: A mostly empty bagel shop where coffee is also served, when open, which isn’t now. A smattering of “Extras” staring into their cellphones. A mysterious “Handler” who goes by Lucy.

“OK, so there’s this subplot, and part of it takes place here at the bagel shop,” Lucy confides, actor to “actor.” I nod knowingly. I know what a bagel is. And where Lenox is. And what a subplot is. I got this.

“And there’s this guy, his name is Orwell, and he’s a sperm thief.”

Whoa. That was out of the blue. I shift uncomfortably in my seat. How does one internalize a subplot about a thief who steals … a man’s pride?

I’m back to zero mulling my options. Does my character smile? Sulk in the corner? Act natural? What does “natural” look like in this instance? A flood of emotions. I need to know more.

“Then there’s the plot-plot,” Lucy explains.

It’s about a Holden Caufield-like kid named Nathan who’s kicked out of boarding school and put to pasture on his dad’s horse farm. But he hates farming and horses. And there’s a rich guy’s kid named Chaz, who is a preppy jerk. Nathan meets a pretty girl. Meanwhile, there’s a talking horse.

The horse tells Nathan that someone is … let’s make this PG … doing “this-and-that” to him at night and stealing his “this-and-that” and selling it. To be clear, “this-and-that” is not happening to Nathan himself, although he has fallen in love and probably dreams about “this-and-that”. And actually, there’s an uncomfortable scene where something like “this-and-that” does happen, but Nathan is the only one in the scene. Awkward!

Lucy looks around the room. It’s all guys. “We need some girls,” she says.

“There’s a girl at Haven finishing her shift,” another Extra offers. “But she looks kind of young.” We’re filming a nighttime bar scene.

“I messaged everyone I know,” someone else offers.

A woman from the crew volunteers, but she’s shy.

“It’s okay, you’ll just be sitting at this table, drinking a beer, with a guy,” Lucy explains. “You’ll do great!”

As I try to piece together everything I’ve just learned, the acting crumbs begin to form a cookie. I can do this. After all, the woman from the crew is the one who has to be in character and show emotion from the back of her head. I’m told that I’ll be shot in profile. Whew!

A lot of people think being an Extra is easy-peasy. It’s not. It takes a lot of concentration to blend in like a wallflower, to pretend to stare at your beer or have a make-believe conversation with another Extra. And for sound quality reasons, we Extras have to do all this pretending in an actual near whisper. And we have to pretend to have these pretend conversations over and over again. While drinking beer.

I am placed at the bar next to a Greek barista named Pericles (I never did learn his stage-name). We begin to discuss the nuances of the European Union and why the Greeks resent the Germans (“They come for our beaches. We host them, and then they try to tell us how to behave! Would you like a German telling you how to behave?” Actually, no.) And despite the constant interruptions, as true extra professionals we never break character, always resist waving at mom, and diligently drink our beer as instructed.

In between shoots, I speak with the director, Christian Frelinghuysen, 25. In addition to being filmed at locations in Lenox and Great Barrington, much of the film takes place at a local farm. Raised in Arizona, Christian spent summers in The Berkshires. He has filmed several shorts, but A Stroke of Luck is his first feature-length film – and he always knew he’d film it here.

Eager for more crumbs to fine-tune my performance, Christian obliges. The movie is a cross between Footloose and Super Bad, he tells me. Nathan’s parents are separated or divorced, new information that I need to digest. (Should I knit my brow for a pregnant pause of reckoning as the camera pans across the bar?) Christian continues: Nathan isn’t happy on the farm because it’s full of horse poo, which he is expected to shovel frequently. I let that stink sink in for a moment. I’m tempted to model sovereign behavior for Nathan, standing up to shout “Stella!” But that might confuse the bartender, a wet-behind-ears Extra who’s already having trouble keeping track of orders.

Then another crumb: Nathan and his father have an uneasy relationship. A wave of emotion overcomes me! So did I! But this is a comedy. I work to resolve these conflicting emotions. It’s what we method actors do. I double check the main bullet point on Wikipedia just to be sure: With the Stanislavski’s method, actors draw upon their own feelings and experiences to convey the “truth” of the character they are portraying. The actor puts himself or herself in the mindset of the character finding things in common in order to give a more genuine portrayal of the character. Indeed! Life is but a stage!

In this scene, Christian explains, our hero (Nathan) escapes farm life to grab a beer at the local watering hole (Lenox Bagel and Brew!). But when he shows up, he meets (cue hissing!) “Chaz” – the preppy jerk who is dating / not dating the pretty girl. And Chaz gets drunk and territorial and acts “sort of like a douchebag.”

What would Clint Eastwood do? I wonder.

It turns out we’re filming two scenes. Lordy! I begin to prepare myself – my character – for a second scene. In it, Orwell, the “this and that” thief sits at the bar with his milky henchmen and introduces himself to our unsuspecting hero. Back at the farm, the talking horse is pretty stressed out by now, but I’m unclear what Nathan’s mood at the far end of the bar is. I’ll just have to work around it. That’s what professionals do.

As I relax into character at the bar to talk about Brexit with Pericles, I am directed(!) to move to a table across from the bar. I am no longer an “Extra seated at the bar,” but rather an “Extra seated at table across from bar.” And I am now alone, told to read a newspaper, or, more accurately, act like I’m reading the newspaper. I swallow hard, breathe deeply, and do my best given the hasty circumstances.

A dozen takes from several camera angles later, the little sandwich board thingy is snapped shut for the last time. It’s a wrap. The metro section will have to wait. We’re done for the day.

As the cast and crew huddle together, joyfully patting each other on the back, I walk up to another Extra and ask how it was for him. “Dude, free beer! And all I had to do is sit there. And I got paid.”

We Extras are a modest bunch. The everyman of movie sets. The unknown philanthropist who “drowns” just out of sight on the “Titanic” set. The frightened “soldier” who storms the beaches of Normandy, wet, sandy, and out of focus. The swishing sea of angry “Romans” shouting for blood in the hot sun of Gladiator…. Always unsung, sometimes fed.

I pack up my imaginary belongs (an actor is always acting), and head for the door. But wait. Is that pizza? From across the room, my Extra friend shouts: “Dude, pizza! And more beer!” I set down my “belongings.” I’m hopeful. Maybe there will be an “Extra slice.”

Scene Three: Betty’s, a pizza joint in Lenox. Boy and Girl enjoy first date at counter while Extras enjoy free pizza at tables behind them.

The next morning, the phone again rings.

It’s happened! That moment every actor waits for – the Callback! Clearly my knack for silently emoting while discussing the intricacies of the E.U. over beer, as well as my aptitude for reading a newspaper in profile have been recognized! Christian and his producer, Mark Farrell, want me back.

I walk into Betty’s acting both excited yet nonchalant, happy yet mildly perturbed, hungry yet satiated. I’ve been working on these conflicting emotions for the past two hours.

As the lighting and camera crew finish setting up, Lucy the Handler gives me the low-down, professional to professional. In this scene, our hero Nathan is on a date with Sarah, the “love interest” who used to date the preppy “douchebag.” They sip something together at the counter, which I cannot quite make out because I’m seated at a distant table, and I’m not supposed to look and wave into the camera. But Method acting is in the details. If it’s a soda, I know I’ll need to act one way (envy?); a milkshake, another (innocence?). What to do? I resolve to act both ways at once. Practicing conflicting emotions has come in handy, just as I suspected.

Pizzas are randomly placed at each table. I get the veggie pizza. Not bad, but I was eyeing the margherita with fresh mozz. As I internalize my role of casual pizza eater sitting alone, I’m thrown a curveball. The Handler has grabbed a pretty blond off the street and placed her at my table. I’m directed(!) to switch to the opposite side of the table and now sit facing the wall. This way the camera will capture the blonde’s face, instead of mine. It’s okay. I’ve been blonde before, too. Albeit in my single digits. But I still had my fun. And now I get to really show my stuff – emoting from the back of my head!