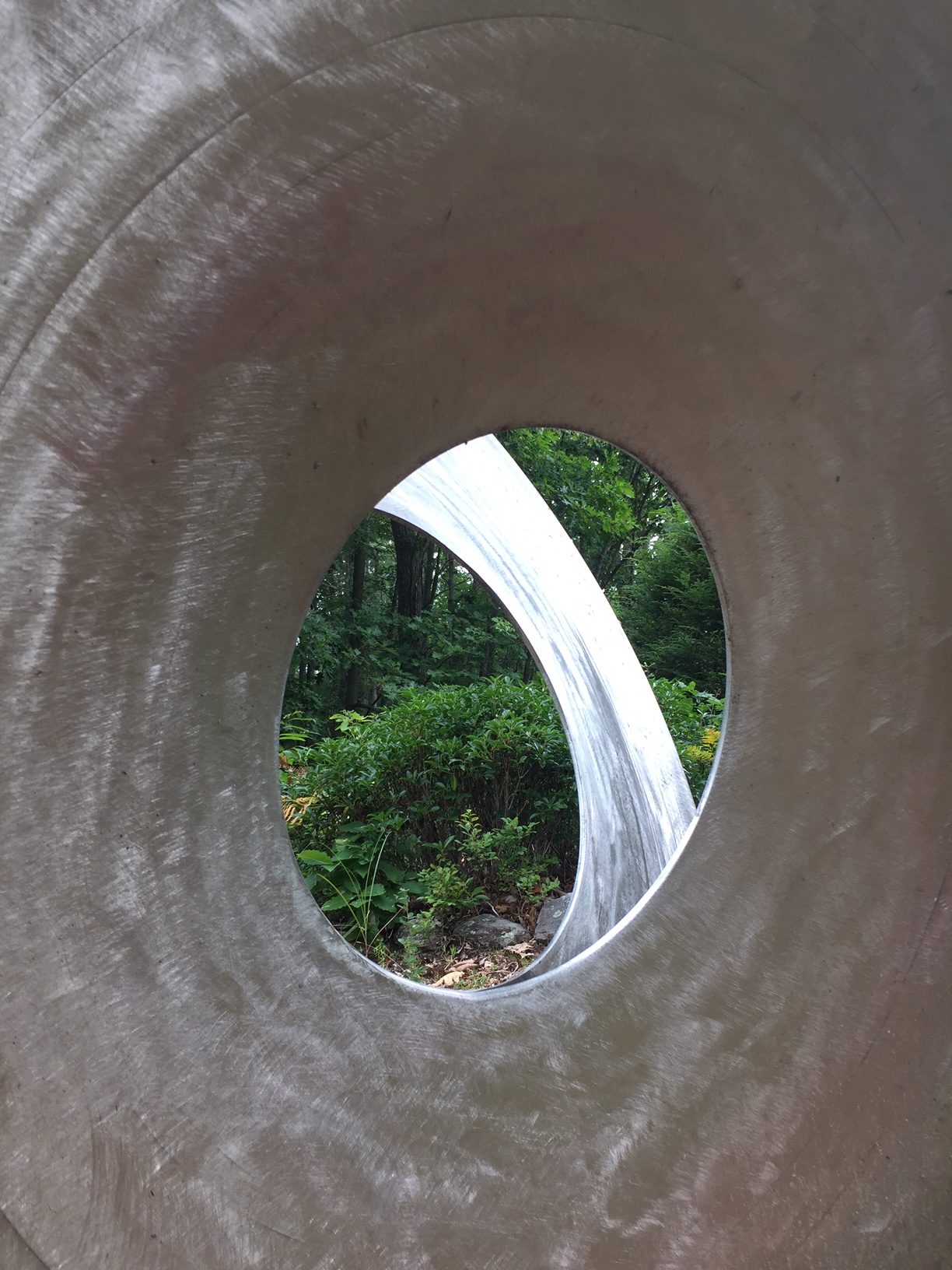 Sheffield — Situated far above the famed mile-long cornfields, the pristine stalks of which seem to stretch from Ashley Falls to Canaan, Connecticut, is Butler Sculpture Park. My daughter and I stumbled upon the 46 largely wooded acres — home to 73 metal sculptures by artist Robert Butler — quite by accident one morning this past week. She was sporting bare feet and I a mask when we planned to duck in and out of this off-the-beaten path locale on our way home (via a largely circuitous path) following an orthodontist appointment. Just moments after arriving, we were interrupted by a bespectacled man toting a worn, blue backpack. “I am Butler,” he announced, inviting us, without further comment, into his sylvan sculpture sanctuary.

“My high school art teacher pushed me and pushed me and pushed me all the time — and that’s how it all happened,” Butler explained of his arriving at this auspicious moment: the 30th anniversary season of the Butler Sculpture Park. In that time, more than 200 pieces have left the property, earning the Sheffield-based artist “enough to live, every year.” Inviting the public to the place he calls work and home is no small gesture, and it’s one that seems to fuel both Butler’s sense of purpose and generosity. “I think [visitors] are curious as to what this place is, [and] when they leave, they always seem very happy,” he shared of the myriad guests he’s hosted over the past three decades.

Left to explore, Alice and I wended our way through the woods, stopping to pause on a curved footbridge crafted from railroad ties, before we first caught a glimpse of what we later learned was grade 316 stainless steel (a good choice for its corrosion-resistant properties) glinting beneath the verdant canopy. We walked on, through still woods and carpets of moss underfoot, as sculpture after sculpture revealed itself to us. At several points along the way, pairs of painted metal chairs invite one to take pause. While I was drawn to the repetition of shapes — crescent moons, leaves and spheres — Alice was more taken by the surroundings. “It’s quiet,” she said, “which adds a very interesting aspect to the works [of art].” Her observation was worth contemplating, which I did until the audible sound of power tools tugged our attention toward the East Studio.

“A lot of times, you have to work with what you have,” Butler told us after joining us in the circular drive outside his workshop. Motioning for us to follow him, he walked us toward a medium-sized sculpture we had imagined was a sailboat just moments before. “Do you see anything human here?” was the question, and almost instantly, I saw it: the diminutive, pointed toes of a dancer delicately poised upon a pair of wheels, her skirt billowing behind her (as if the sail of a boat, as I had originally imagined). “It was begging to be figurative,” Butler said of the “ballet foot” that certainly shared qualities of a boat’s propellerhead. Butler then motioned toward a trio of what, to me, looked like capital As — or, as others have seen, three compasses for drawing circles — and explained the genesis of that piece. “This takes me back to the elementary grades when we played olly-olly-in-come-free,” he explained while simultaneously striking a pose, balanced on one leg.

The evolution of Butler’s career as a sculptor is evident with careful looking and listening. Back in the ‘70s, Butler made a foray into large, spherical mobiles — up to 10 feet in diameter — with up to three moving pieces. When the director of the Hartford YMCA purchased eight mobiles to fill the hallways of the nonprofit, Butler realized he could sell his work. For the next decade, he worked in small-scale sculptures, many of which are on display in a pair of indoor galleries above his workshop. Butler’s move to his current location afforded him “space to go large,” and large he went, gravitating toward sheet metal and a welding torch to craft the large pieces that punctuate the property today.

As to what keeps Butler ticking? “You have to be in shape, or you will get hurt,” he said of his chosen line of work. He dons a weight belt as part of his daily uniform, and working out (at Berkshire South or in his workshop-based gym) and swimming (nightly at Twin Lakes) keeps him fit. To say that Butler’s skill has been honed to perfection might sound cliche, but it’s true. And in some ways, his ability to manipulate stainless steel — by welding disparate pieces together with hardly a trace of his having done so — is a life skill as much as it is an artistic skill. “To get rid of welds, you have to overweld,” he explained. “You bring the surface up, grind it down, and feather it out,” he said, inviting us to posit where the welds once were in a delicate piece tucked beneath the balcony of his studio. “Go ahead and touch the sculpture if you want,” he invited us, explaining that acid rain will do more damage than human hands.

An old black-and-white poster on the workshop wall pays homage to David Smith — an American abstract expressionist sculptor and painter best known for creating large steel abstract geometric sculptures — who Butler studied heavily. In fact, Storm King Art Center in New Windsor, New York, has one of the most significant institutional holdings of Smith’s works, 13 of which were acquired when Storm King co-founder Ralph E. Ogden visited Smith’s home and studio at Bolton Landing. There, he was struck by the outdoor installation of sculpture, devised over the course of Smith’s lifetime, that I imagine was similar in scope to Butler’s sculpture park.

In the moments of quiet, as my daughter and I perused the property, I couldn’t help but think of a children’s book I’ve read to Alice hundreds of times. In “The Magical Garden of Claude Monet” by Laurence Anholt, a young girl named Julie escapes Paris for the day when her mother (Impressionist painter Berthe Morisot) takes her by train to visit Giverny. There, unbeknownst to the small girl, she befriends the artist Claude Monet, and the two exchange lofty ideas about the importance of patience in both painting and gardening. I wonder if, in another 30 years, Alice will tell the tale of stopping by Shunpike Road in Sheffield on an ordinary summer day and getting a tour of the single-sculptor designed park by the sculptor himself; I suppose only time will tell. In the meantime, make the drive yourself before the season ends Saturday, Oct. 31; the park is open daily from 11 a.m. to 5 p.m. Rumor has it there are fantastic sunsets atop the property, all of which Butler (and his wife, Susan, who manages the gallery) is more than willing to share. “I’ve taught for years, and now it’s time to give back.” For more information, visit their website.