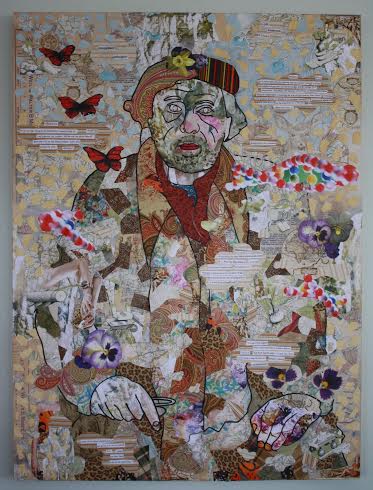 JL: Greetings Laura, thank you for taking the time to talk with The Berkshire Edge. Can you tell our readers a little about your history as a curator?

LK: I have an unorthodox background as a curator. I started my life as professional dancer. Became too old to dance around 18-20. Became interested in fashion world. Very similar to museum world as it is all about presentation. About paying attention to what the audience is looking for. I then owned a gallery on Madison Avenue that specialized in one-of-a-kind handmade jewelry. I realized there were niche areas in the art world that weren’t being addressed by the incredible museums in NYC and became involved in the American Craft Museum, now the Museum of Art and Design (across from MOMA). It was there that I created a gift shop and created themed selling events for craft artists.

JL: Can you give an example?

LK: Well, the tea party was to sell articles around tea. Then there was the toy makers, wearable art—fashion. Clothing and jewelry.

The jewelry event we called LOOT and run every year for 4 or 5 days and my vision was to give artisans who made incredible noncommercial jewelry a chance to sell their work.

I created a Judaica show, though Jews can’t define a category called Jewish art. In Christianity there are devotional artworks; Jews take the Second Commandment, “Thou shalt not worship graven idols.”

Curating is also about business, though most people in the art world don’t want to talk about business. This is why it is terrific to work in a museum because we don’t have to worry about the aspects of commercialism that seep into the more emotional parts of art.

JL: Is there a difference between Christian and Jewish Art?

LK: Michael Dempsey from Loyola in New Orleans is a clergy who brings his students to the Met every year to show his students art that are vehicles of devotion. Jews don’t focus on an image ever. Christians do. We celebrate holidays and have objects to celebrate those holidays.

JL: How did you come about working with the Hebrew Union College?

LK: I organized a Judaica sale of menorahs, Sabbath candlesticks, etc. This is our vocabulary of objects used by Jewish people to reinforce our holidays. I was then invited by the Hebrew Union College to curate an exhibit of Passover plates. Many Jewish artists have created versions of Seder plates but they hadn’t been exhibited per se. I did that show in 1990/91. I was invited to do more. Have done over a 100 since then. Out of our Passover show grew an organization of artisans calling themselves: The American Guild of Judaic Art, which I chaired. Then a synagogue in Westchester picked up the idea of doing a selling event of Judaica which I helped with.

In 1999 I did an epic show called “Living in the moment” because Jews don’t count years like Christians at 2000; they precede the Christian calendar and wanted to honor the millennium. The idea is that Jews live in the moment. Jews memorialize their relatives who died by lighting a candle that burns for 24 hours on the day of that person’s death. It’s called a yahrzeit (year) lamp or light. This show was Judaica that was all one of a kind and brought together a community who didn’t realize that they were…From then on the museum began to evolve.

Backtracking in 1992 I was asked to do a show to commemorate expulsion of Jews from Spain in 1492. I realized this was not an easy task because it is easier to talk about Christian art because there were always patrons. Collecting of Christian art has always been a tradition. Jews rarely had patrons and there are rare collections of Jewish art. Jews were not allowed to join guilds from 13th century to the 18th century. Hence, there is no long tradition of Jewish art. In fact, Jews didn’t really become collectors of art until they entered the mixed world and saw art as collectible in the 20th century.

LK: Abstract expressionism is not figurative, not landscapes. It is abstracted and deconstructed. This appealed to the Jewish aesthetic. I firmly believe that art is a language. It is a visual language. It is like reading. People learn differently. They see something that changes their lives. A little corner is changed. I firmly believe in that. I am not doing exhibitions aimed at the cognoscenti or the art world. I love them but I don ‘t think that’s my audiences. My dialogue is with the audience. I am serving both the artist and the audience. I have done one person shows. I find myself being an arbiter of moral issues.

JL: Your current exhibition is called “Evil: A matter of Intent.” How did you come to choose this theme?

LK: It’s very easy to do theme shows. That’s the retailer in me. We had created a show on textiles about four years ago called “A Stitch in Jewish time.”

Textiles are important and are art in the Jewish world. They are taken seriously probably because of the vicissitudes of history Jews have had to pick up and run and textiles can be rolled up and carried. The Torah, the holy scrolls, are covered in textiles. The curtain in front of the Ark is always a beautiful ornamental handmade textile. In the textile show one of the artists did a tribute to the Holocaust — incredibly powerful. Multi dimensional. In a small gallery and that piece was always jammed with people viewing it — looking deeply at the piece and discerning the symbolism. Right after that the New York State Legislature was arguing the same sex marriage laws and my response was to do a show about sexuality called, “The Sexuality Spectrum,” at the museum. It was controversial and a blockbuster. It traveled and was well received. It was a changing moment for me that we can address things very seriously. This helps people feel that they can change things. I have a group of women friends who have been curators and we decided “we did sex so we should do evil.”

JL: Can you talk a little about this exhibition?

LK: In the Jewish community evil is the Holocaust.

I personally feel that the Holocaust must be told as history and not as interpretation. It was very real. The scars are very real. And it’s too close. 2015 is the 100th anniversary of the annihilation of the Armenians. The Turks annihilated the Armenians. Then there was the famine of the Irish that no one came to help. Genocides are going on as we’re sitting here. We have an original poster from 1915 of the Armenian genocide. We have a commemorative poster made by an Armenian artist. The idea for the show was to explore the idea of evil.

We placed Grace Graupe-Pillard’s gunmen on wall that you could see from the street and someone thought they were real. We moved them. But it proves my point of how powerful art is that people would want us to take it down.

So far the audience feedback has been amazing. School tours are coming. Other groups are coming. People come back and back.

JL: I was fortunate to be included in this exhibition with my portrait of Danny Klein. Can you tell me why you chose this particular work of art?

LK: I wanted this portrait because it is a dialogue between a person who uses words and a person who uses visuals. I heard about your work because an artist who we knew had a terrible divorce and went to New Orleans to photograph your work. So I know about [hurricane] Katrina and I knew about your work. Someone who referred to you as an outsider artist was wrong! You’re using a vocabulary of collage and materials and words and untraditional techniques to make a major statement.

I get really enthused. I learn from art. I love artists because of the richness of their vocabulary.

My next show is about numbers. The next one after that is about the homeless situation, the refugees, and the people who are denied sanctuary. It addresses the concept of home and what does it mean?

JL: Do you think Donald Trump is evil?

LK: Yes. Of course there is no mitigating reason for his speech.

JL: Some say evil is necessary. What is a necessary evil?

LK: I haven’t a clue. Hiroshima?