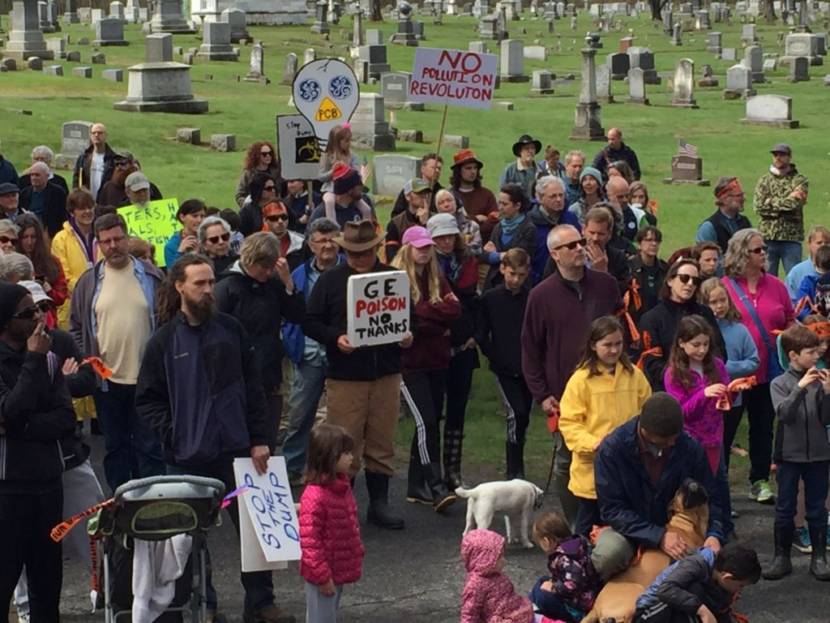 Heather Bellow
About 250 people turned out in May 2016 for a 'Stop the Dumps' protest a proposed PCB dump site on the shores of Rising Pond in the village of Housatonic.

Lenox — For the first time in years, on Monday night, Dec. 3, Berkshire County residents and other stakeholders will have a chance to weigh in on the continuing mediation and cleanup process of PCBs dumped by General Electric into the Housatonic River until 1979, when polychlorinated biphenyls were declared a probable carcinogen and the practice was banned. 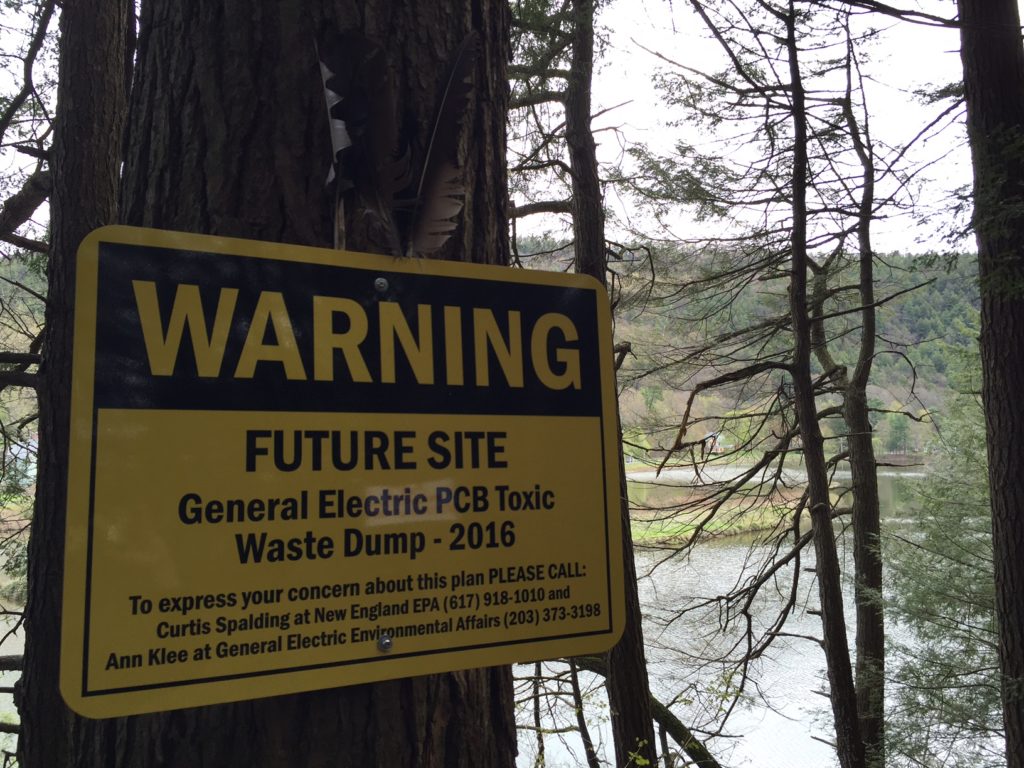 A warning sign on the banks of Rising Pond. Photo: Heather Bellow

“This will be an opportunity for the public to receive an update on the mediation process and status,” said Kelsey Dumville, spokesperson for the U.S. Environmental Protection Agency’s Region 1, which is conducting the public meeting. “Members of the public will also be given the opportunity to inform EPA on what is most important to them and what would be an ideal cleanup, and to voice any concerns or questions on this process and status.”

The cleanup of PCBs from the Housatonic River has been proceeding for decades. Dumped in the river from the 1930s to the 1970s during GE’s transformer manufacturing operations in Pittsfield, PCBs are in the soil, sediment and floodplain of the river, and have rendered fish and wild fowl toxic and inedible. PCBs are likely to be carcinogenic in humans.

The company was permitted by the EPA to dump PCBs dredged earlier from the Pittsfield section of the river into an abandoned site known as “Hill 78,” adjacent to Allendale Elementary School in Pittsfield.

The U.S. Environmental Protection Agency issued a consent decree that GE be required to remove PCBs from the Housatonic below Pittsfield, an operation known as Rest of River, and ship them to a licensed out-of-state facility. In January 2016, GE formally objected to EPA’s final cleanup remedy, challenging the agency’s directive to transport and dispose of the PCB waste off-site. That entire operation could cost upwards of $600 million.

GE has also challenged the EPA’s order to dispose of the contaminated sediment at an out-of-state facility, insisting it wants to establish dumps for the material dredged from the river in Lenox Dale at Woods Pond, near Goose Pond in Lee and on land adjacent to Rising Pond, an impoundment on the river in the village of Housatonic. The local dumping method of disposal is expected to save the company roughly $200 million.

General Electric has insisted on disposing of the PCB contaminated sludge from the Housatonic River in three landfills (outlined in orange) in Berkshire County. The Environmental Protection Agency has proposed the carcinogenic sediment be shipped to a licensed containment facility.

GE’s challenge has resulted in a mediation process that intended to avoid a court battle. Either the parties will reach agreement, or the permit governing dredging and disposal of soil and sediments contaminated by PCBs will likely be challenged in federal court. The EPA says an update on the mediation process is on the agenda for Monday’s meeting in Lenox. Click here to view the agenda.

In its announcement about the meeting, the EPA did not mention the proposed Berkshire County PCB dumps. But the dumps are part of the mediation process and will no doubt weigh heavily on the minds of those in attendance.

The plan to dispose of the toxic sludge has spawned colorful protests and a pair of “Stop The Dumps” meetings sponsored by the Housatonic River Initiative. About 250 people attended another protest at the proposed dump site on the shores of Rising Pond in Housatonic village in May 2016. 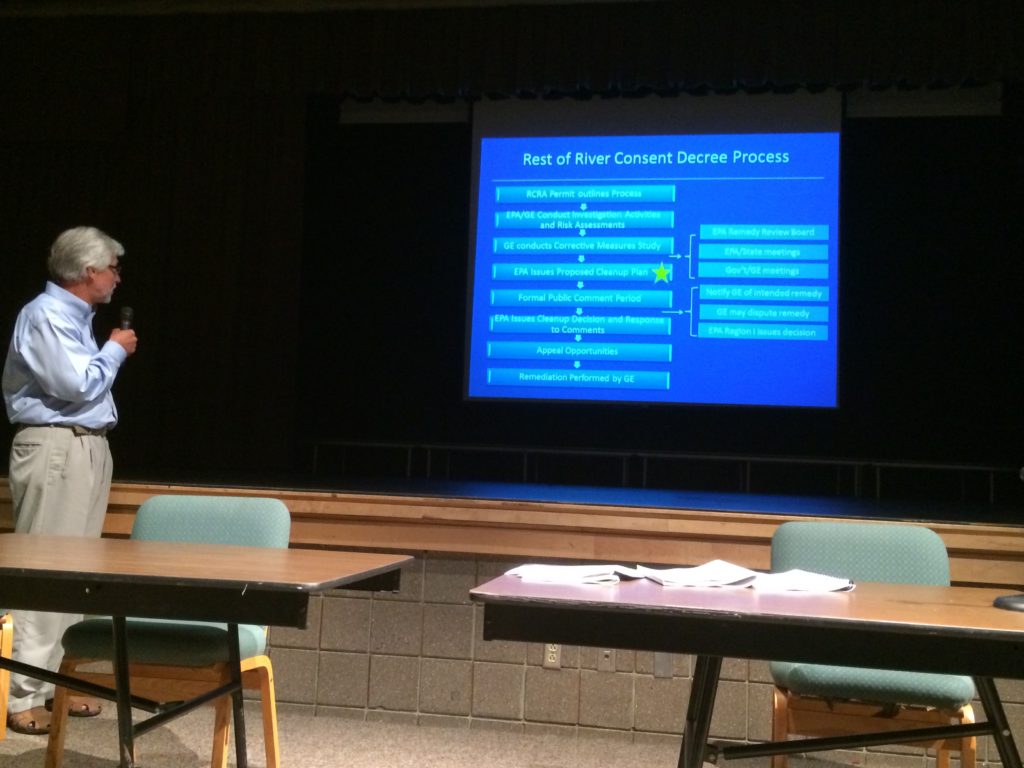 A news release put out by the Berkshire Environmental Action Team says “the mediation process is mostly behind closed doors and only open to those selected participants,” but Monday’s meeting is to inform the public

“Berkshire Environmental Action Team pushed hard to have a public participation part to this mediation process, so please come and show that you want to have a voice in this decision,” BEAT said.

Peter Hofman of the Lee Greener Gateway Committee, said members of the panel will be in attendance. He sent the committee’s sign-on statement to The Edge:

The cleanup of the Housatonic River must protect the Berkshires’ ecological integrity, natural beauty, pristine image, cultural richness, and residents’ economic and physical well-being. To that end, we support a strong and unambiguous EPA permit governing the Rest of River cleanup. The permit must:

The meeting will start at 5:30 p.m. in Lenox Memorial Middle and High School’s Duffin Theater at 197 East St. The EPA expects the meeting to last no more than three hours.