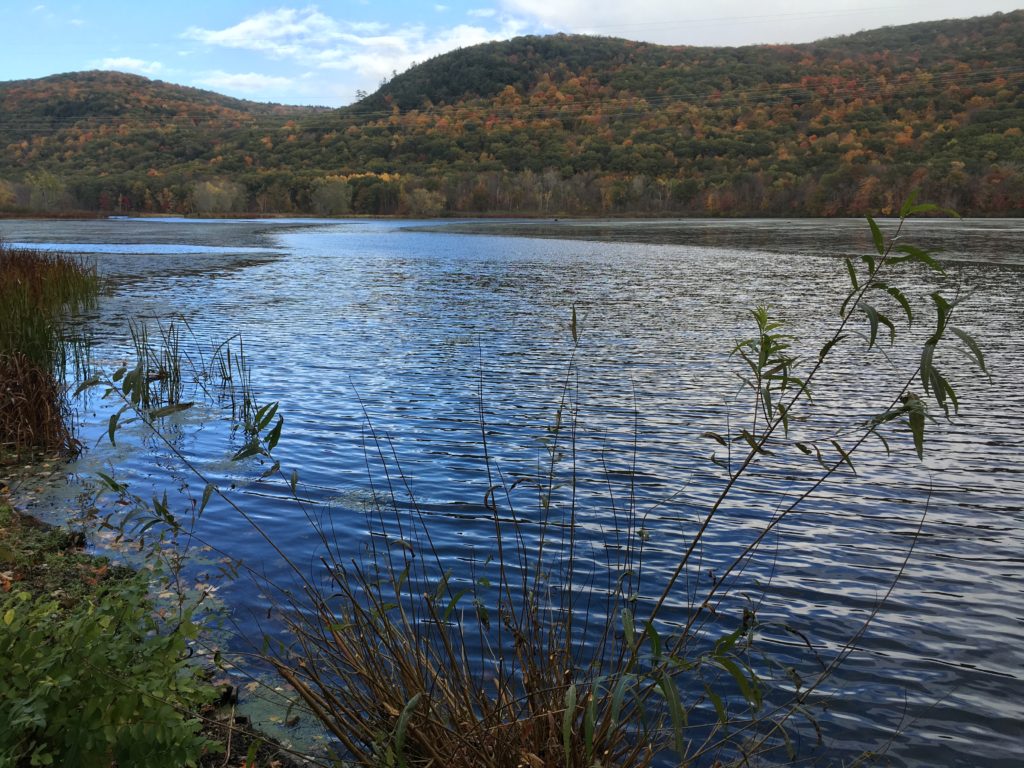 David Scribner
Idyllic as Woods Pond in Lenox Dale may appear on its surface, the sediment on the bottom of the pond and along its banks contains very high levels of PCB contamination, deposited there as the river backed up behind the Woods Pond dam. The EPA proposes to dredge the PCB-polluted soil from Woods Pond, and has posted warnings along its banks of the risks of eating fish or wildlife taken from the river at this point.

For 45 years General Electric Company dumped PCBs from its Pittsfield manufacturing plant into the Housatonic River. Under the terms of the “intended final decision” released September 30, the company will spend 13 years and $613 million to undo the damage. Many Berkshire County residents were hoping for a more thorough remedy.

A consent decree negotiated between GE and EPA in 2000 divided the river into three segments for cleanup purposes. By 2008, GE had completed two of the three – the PCB cleanup at its Pittsfield plant and the first two miles of the river up to the confluence of the East and West branches at Fred Garner Park in Pittsfield.

The Audubon Society’s Canoe Meadows Wildlife Sanctuary in Pittsfield will be subject to a cleanup of PCBs. Photo: David Scribner

The “intended final decision” addresses the third segment, “the Rest of the River.” This stretch winds its way past Lenox and Great Barrington, then into Connecticut and, eventually, into Long Island Sound. EPA proposed a PCB cleanup plan for this last stretch in June 2014 and received public comment on the plan throughout last fall. It hasn’t been formally finalized, but it’s getting close.

Asked about whether the plan had changed based on the public comments, Jim Murphy, speaking for EPA, said “ there are a few modifications, but the overall scope and cost of the final plan is the same as the proposed plan.”

The Housatonic Rest of the River Municipal Committee, comprised of the towns of Pittsfield, Lenox, Lee, Stockbridge, Great Barrington, and Sheffield had expressed concern about the proposed cleanup, writing in their joint comment, “We have before us a [cleanup] that allows significant concentrations and volumes of PCB-contaminated sediment, soils and water to remain in the water after completion of remediation activities…”

From 1932 to 1977, GE constructed and repaired electrical transformers using fluids containing polychlorinated biphenyls, or PCBs at its Pittsfield plant. PCBs are carcinogenic and cause a variety of other adverse health effects on the immune, reproductive, and nervous systems, according to EPA’s web site. Used by GE for their cooling properties, they were banned in 1979. 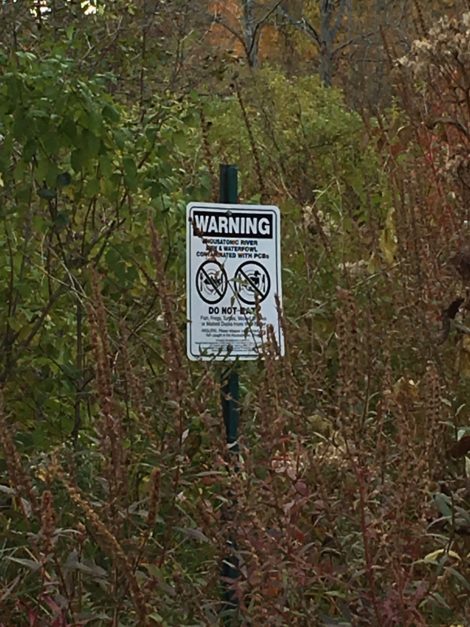 Along the Housatonic River south of Pittsfield, a warning sign advises against eating fish or wildlife from the river. Photo: David Scribner

When the Housatanic overflows its banks, PCB-laden sediments are deposited on the adjoining floodplain, and the compounds accumulate in the leaves of plants and food crops that are grown there. The chemical compounds have also been taken up into the bodies of fish, turtles, frogs, and waterfowl, such as woodcocks and mallards.

The Housatonic’s banks are sprinkled with signs warning people of the health dangers of consuming fish from the river. Food crops grown on the contaminated floodplains may be more difficult to identify and avoid.

Although the Housatonic was proposed for listing as a Superfund site in 1997, that listing was never finalized. Rather, the 2000 consent decree sets forth the procedural framework for modification of GE’s permit to handle hazardous waste under the Resource Conservation and Recovery Act (RCRA) to include the cleanup plan, or RCR “corrective action” for the river. GE “permit modification” in this context means the same thing as the “GE cleanup” or remediation.

According to Mr. Murphy, if GE now disagrees with the EPA intended final plan, it has 30 days from the September 30 letter notification to the company to invoke dispute resolution procedures. In fact, “we expect GE to dispute some of the provisions,” Mr. Murphy said.

One area of contention may revolve around transporting and disposing of the estimated 990,000 cubic yards of PCB-contaminated soil.

EPA has required in the “intended final plan” that GE dispose of the waste soil in a federally licensed PCB disposal facility. “There are no licensed facilities in Massachusetts,” said Mr. Murphy, “so GE would need to transport the soil [out of state] by rail” – an expensive option that the company has opposed in the past, proposing instead to transport the waste to one of three landfills in Berkshire County.

For the cleanup of the Hudson River PCBs, GE transported the contaminated soil and sediments to Texas by rail, according to Mr. Murphy. “For PCBs at high levels, there are special facilities and only a few,” including one in Michigan and one near Niagara Falls in addition to Texas.

After resolution of this likely dispute with GE, along with any others, EPA will issue the final permit. The agency will then provide written responses to those who commented on the June 2014 proposed plan.

When the permit is finalized, any individual, group, municipality or county that commented on the proposed plan — as well as GE itself — can file an appeal to the EPA Environmental Appeals Board (EAB), which is the arbiter of disputed permits. An EAB decision can, in turn, be appealed to federal court for judicial resolution.

How clean will the river be?

The “intended final plan” calls for the same program that was proposed — to dredge, remove and dispose of some contaminated areas, to cap others, and to simply monitor still others. Many commenters had asserted that was inadequate, however, and that all –or at least, far more – of the contaminated soil should be removed. EPA’s most protective option, after all, had called for a 52-year cleanup – 39 more years of cleanup than the 13 that is near-final. 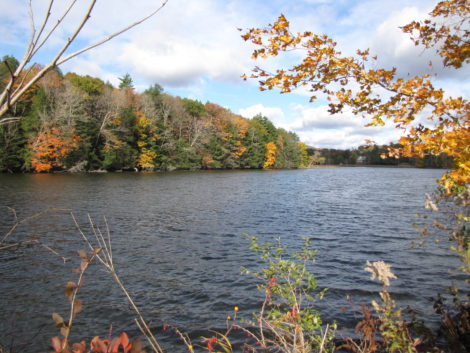 Rising Pond in Great Barrington contains an impoundment of PCB-contaminated sediment that will have to be be removed. Photo: David Scribner

The State Department of Environmental Protection (DEP) has estimated that roughly 75 per cent of the PCBs will remain in the river – monitored or capped – and about 25 per cent will actually be dredged and removed.

A majority of the PCB removal will take place in an area known as Reach 5, a 10-mile of stretch from south Pittsfield to Woods Pond in Lenox.

Dr. Peter deFur, a consultant to Housatonic River Initiative, said “the State Department of Fish and Game is the source of the push to leave PCBs in the river because they think that the habitat of state-listed endangered plants will be damaged by dredging.”

GE agrees with the State, asserting in its comments on the proposed plan that “an aggressive cleanup effort will disrupt [the river] beyond recognition and repair…including state-listed rare species.”

There are, however, good techniques for culturing the plants that are endangered according to Dr. DeFur. Culturing and replanting has been successfully done in other cleanups. “Besides,” he said, this pits the state-listed plants against biota –fish, insects, waterfowl – and people that would benefit from a full cleanup.” He added, “GE spent $10 million on a spurious ’PCBs-are-better-left alone’ campaign.”

Some technical experts, including Dr. deFur, believe that EPA should be requiring effective new remediation techniques such as bioremediation and sediment washing.

Bioremediation of dioxins, which, like PCBs, are chlorinated organic chemicals, was underway in Great Barrington at the Log Homes dioxin site until its abrupt termination in July by the DEP. Both DEP and EPA have been skeptical of the process, and DEP wrote the landowner that “there must be agreement on the analyses and methodology to be used in proving a site-wide reduction in dioxin mass.”

Asked if there was a connection between the termination of the dioxin remediation at Log Homes and both the State and federal refusal to consider the technique for the Housatonic cleanup, Jim Murphy of EPA said, “Biotech Restorations had approached EPA about the GE site but they [Biotech] said they couldn’t do a Quality Assurance plan.”

He continued, “We [EPA Region I] even had an EPA Headquarters person –David Charters –review the bioremediation proposal. He told the company that he would work with them to improve their Quality Assurance plan, but he didn’t hear back from them.”

On October 5, 2015, EPA posted “Community Update: EPA’s Intended Final Decision on Housatonic Rest of River Permit, which is at https://semspub.epa.gov/work/01/583729.pdf

— Grandma Moses
Read next: EYES TO THE SKY: Dawn is alight with meteors, four planets